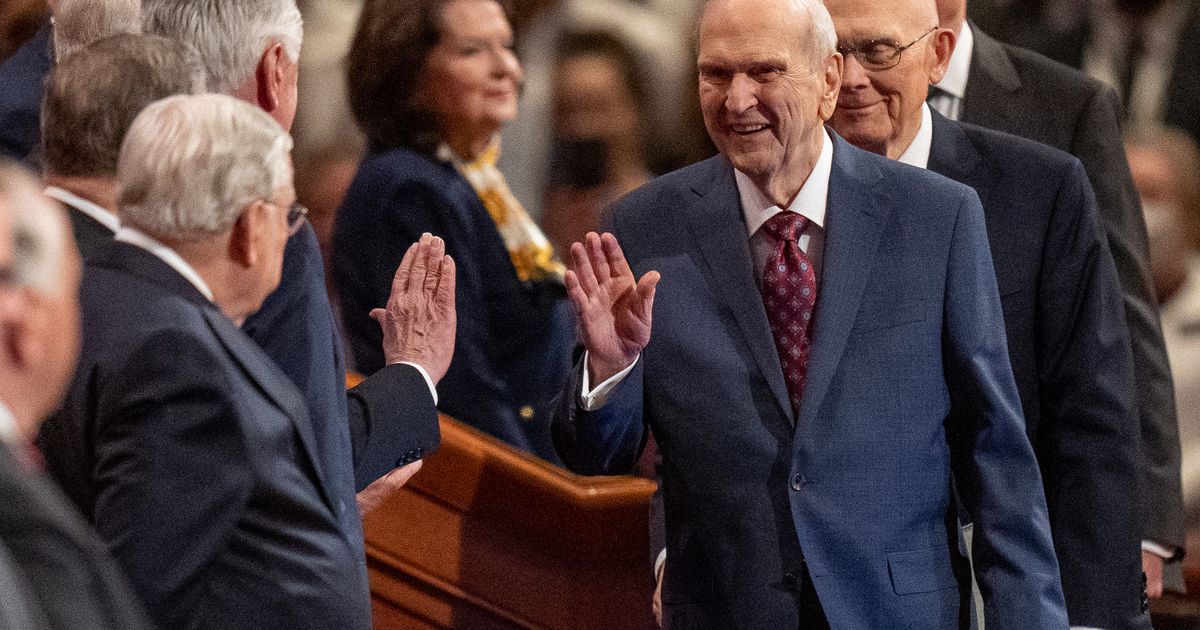 The Mormon Land Newsletter is the Salt Lake Tribune’s weekly highlight reel covering developments in and about The Church of Jesus Christ of Latter-day Saints. Keep supporting us Patreon and get exclusive access to religious content for Tribune subscribers only, expanded newsletters, podcast transcripts and more.

General conference seems to be the stuff of dreams.

Our Mormonland readers had no trouble creating and sharing “dream headlines” they would like to see at next month’s gathering.

As expected, they ranged from silly to sober, hopeful to sad, and everything in between. We have received more than 340 responses and will publish them by the opening conference on October 1st.

Here is the first batch. See what you think:

— Conference center to be repurposed to store gold bars.

— Clothing may only be worn in the temple.

— Biden won the election; everyone stops lying about it.

– If you plan to vote for Donald Trump, that becomes a Temple question. If yes, recommend no.

— We are building a temple in Jerusalem.

— Counselors in dioceses involving women for the first time.

— Female priesthood leaders, sisters called to the Quorum of the Twelve.

– Coffee or tea? The Church relaxes the Word of Wisdom’s hot-drink stance “in moderation.”

— LDS Health Law Updated — Coffee is in; Lemonades are out (except for root beer).

– The Church asks for your prayers on how to bring gays and lesbians back into the lap.

– Memorial announced to honor the First Lady of the Church, Fanny Alger.

– BYU lifts waiver on clergy confidentiality and vows to end distrust of faculty.

— “I want to apologize to the LGBTQ+ community,” Oaks said in a historic conversation.

— Full disclosure of how tithe money is spent. Annual budgets and inventory are posted to all members through the Church website.

— The abuse hotline has been moved to social services run by social workers; Church Ends Hotline Relationship With Attorneys.

— “Everything has already been said,” explains Nelson. ‘Let’s just party.’

— The church is reconfiguring all buildings for the drive-up tithing.

– Donny Osmond was called to the Seventies because “any dream is enough”.

— The church adds the proclamation of the family to its standard works.

– Nelson says changing the name of the Book of Mormon to the New American Testament is a victory for Jesus.

— The church donates half of the Ensign Peak fund to end world poverty.

—Women who can heal and bless, as they did when the Church was organized.

— Latest revelation: Cleaning the chapel toilets is no longer necessary.

Speaking of the conference

According to a press release, in-person attendance at the October 1 and 2 sessions at the downtown Salt Lake City Conference Center will be limited due to construction in and around Temple Square.

How limited? That has yet to be announced. In April, tickets were capped at 10,000 per session, or about half capacity.

Also, the Saturday evening meeting will be a general session.

Back to the future with anti-BYU positions?

Defending NCAA champion South Carolina’s decision to cancel its home-and-home women’s basketball series with Brigham Young University after reports of a racial outburst at a recent BYU volleyball game stems from earlier athletic protests against the Provo -school back.

Most notably, perhaps, a football game 53 years ago.

Fourteen African Americans on the University of Wyoming team planned to do a civil rights game on October 18, 1969, when the Cowboys were hosting the Cougars. Their game plan: Wear black armbands to protest the church’s racist policies, which at the time prevented black men from holding the priesthood and black women and men from entering temples.

But the players were thrown out before kick-off. Her coach kicked her out of the team the night before the game.

Today, the church’s priesthood/temple ban is history, the cowboys and cougars are not in the same league, and surviving members of the “Black 14” have traded those armbands for linked arms with the Utah-based faith.

The Cowboy Graduates — with their Mind, Body, and Spirit initiative — partnered with the church two years ago to deliver tons of food to vulnerable communities across the country.

(You can read more about the Black 14 here and listen to a Mormon Land podcast featuring one of the players whose son eventually converted to Mormonism.)

Other anti-BYU demonstrations and boycotts erupted during the civil rights era, according to the Utah Historical Quarterly, including in Fort Collins, Colorado; San Jose, California; and El Paso, Texas.

In recent years, advocates have lobbied to keep BYU out of the Big 12 because the school — and by extension the church — opposes same-sex marriage and its positions on other LGBTQ issues. The Cougars have since joined the Big 12 and are scheduled to begin league play next year.

But could South Carolina’s withdrawal be just the beginning of a new round of postponements, protests and boycotts? After all, Dawn Staley, the South Carolina women’s basketball coach and the first black coach, male or female, to win two Division I basketball crowns, is an influential voice.

“As a head coach, my job is to do what is best for my players and staff,” Staley said. “The incident at BYU caused me to re-evaluate our home and I don’t think this is the right time for us to be a part of this series.”

• On this week’s show, BYU graduate student Darron Smith, who teaches sociology at the University of Memphis and is the author of “When Race, Religion & Sports Collide: Black Athletes at BYU and Beyond,” discusses the volleyball game episode and its aftermath Fallout, the history of the school with black athletes, and why BYU and Latter-day Saint leaders need to do much more to address racism on campus and within the faith — beginning with an apology for the former priesthood/temple ban of the Church for Black Members.

Call for Peace in the Sunshine State

Similar to its efforts in Utah, Arizona and Georgia, the church has joined with community leaders in Florida to call for legislation that protects LGBTQ people from discrimination while upholding religious freedom.

“We are extremely concerned that the ongoing conflicts between religious rights and LGBTQ rights are poisoning our civil discourse, undermining freedom of worship and preventing diverse people of good will from living together in peace and mutual respect,” it said in an “open letter.” “. the Tampa Bay Times, signed by Area Seventies Victor P. Patrick and Daniel P. Amato and dozens of other faith and civic leaders (using language that parrots much of the Georgia effort). “…We join a growing number of faith and community leaders from across the country in supporting anti-discrimination legislation that protects all people from discrimination in employment, housing and public accommodation, while protecting important religious rights.”

The letter asserts that “LGBTQ rights and religious rights need not be at odds” and urges the parties to “put aside political motives, malice and misrepresentation and commit to respectful dialogue and good faith engagement.” “.

Apostle Dallin H. Oaks, First Counselor in the First Presidency, advocated a similar path in a landmark address at the University of Virginia last year.

(Francisco Kjolseth | The Salt Lake Tribune) A volunteer walks between Pride flags at a Back to School Pride Night for BYU students in Provo on Saturday, September 3, 2022.

• Christian nationalists are threatening the separation of church and state on which the US was founded, writes Salt Lake Tribune columnist Gordon Monson.

• Anti-LGBTQ protesters protested a Back to School Pride Night in Provo for BYU students.

• The Tribune provided links to significant stories and podcasts about the advances and stumbles in race relations over the past decade at BYU and in the broader church.

• Read excerpts from last week’s Mormon Land podcast about how BYU is trying to stay in the mainstream while still being different from “the world.”

• Federal officials are investigating a July arson attack on the Latter-day Saint Temple under construction in Orem.

Subscribe to here to get these and other newsletter articles delivered to your inbox each week for free.