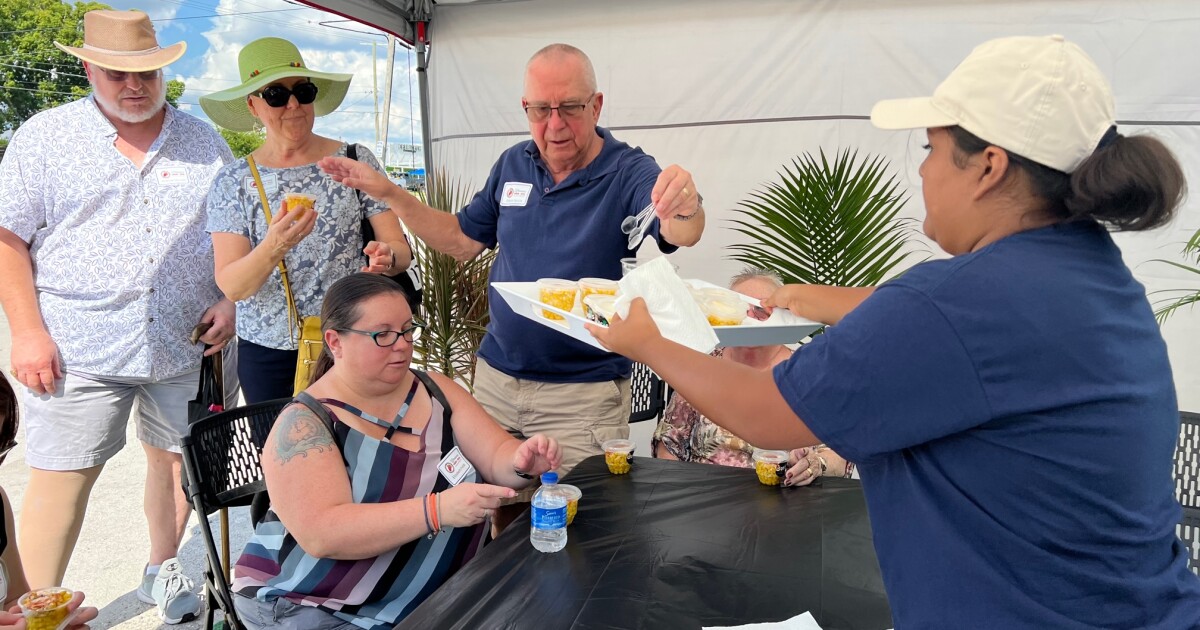 In recent weeks, people have flocked to Wimauma for food and cultural tours that showcase the city‘s rich Hispanic and black history in South Hillsborough County.

The nonprofit Entrepreneurial Latinas organized these Sabor and Soul tours with the help of community partners and a special events grant from the county, and the effort is concluding this weekend.

During a tour last Saturday afternoon, participants young and old jumped on a trolley and were given maracas to shake for applause.

The trip began along a section of State Road 674 that tour guide Ileana Cintron dubbed “the Hillsborough County Taco Road.”

“Because there are 12 taquerias on this stretch of road,” said Cintron, associate director of Enterprising Latinas, a group that helps small business owners and promotes community development in Wimauma.

Over the course of 90 minutes, tours stop at some of these taquerias and visit other bakeries and food trucks in the community. Shopkeepers, many of whom are women, greet diners and share great samples of Mexican, Caribbean, and soul food dishes.

Here are some of the Wimauma staples:

“OMG,” Lynne Hartley said midway through her tour, shortly after trying on a huarache at Taqueria Los Angeles. Huaraches are corn tortillas stuffed with beans and topped with protein and queso fresco.

Hartley was joined by Pam Freas. Coming from nearby Sun City Center, the two said they had never explored Wimauma before. After reading about the tour, which cost $30 per person, they decided to give it a try.

“It’s such a nice little gem that we just have to drive through so now we know to stop. We have to tell people about it; it’s very beautiful,” Freas said.

Brandon resident Joy Shyngle echoed her feelings while enjoying a concha, a sweet bread decorated like a seashell, at Garcia’s Bakery.

“It was really, really fun. I didn’t know all that about Wimauma and how good and amazing the food, the culture and the people are,” said Shyngle.

That kind of feedback is music to Ileana Cintron’s ears. The tours are designed to promote local businesses so they can expand their client base and capitalize on the expansion of the city and surrounding areas.

“The connection to food is everywhere and these are amazing food traditions that both the Hispanic and African American communities have built in Wimauma for generations,” said Cintron, “that’s worth highlighting and inviting everyone to enjoy.” “

In addition to culinary destinations, the tours take participants to a few cultural sites, including the Wimauma Heritage Cemetery — operated by the First Prospect Missionary Baptist Church, which Cintron says has been in the community for more than 100 years.

Throughout the tour, Cintron shared bits of Wimauma’s history with the crowd, where the town got its name from – a combination of the names of the founder’s three daughters – and how its population and demographics have changed over the years.

The city of around 10,000 is mostly rural but is growing with new developments, much like other parts of Florida.

For Julia Sarmiento-Cohen, the tour was a homecoming. The Enterprise Latinas board member grew up in Wimauma but now resides in Ruskin. She pointed to her childhood home as the tram drove past.

Growing up, Sarmiento-Cohen said she felt Wimauma didn’t get much attention other than for negative reasons like crime.

“Seeing all the positive things that are being shown gives hope to other communities that may have gotten off to a rocky start,” Sarmiento-Cohen said. “It’s nice to see the good things that are coming, with the people and small businesses and all the growth that we have here.”

Signs of change were evident as the trolley trundled between historic neighborhoods, a housing complex for migrant farm workers, and new development around a man-made lagoon.

Despite the progress and growing population, Cintron said Wimauma still faces challenges such as poverty and access to economic opportunities. She said that’s why community development events like this are so important.

“To change narratives and perceptions of what the community is and to help people reinterpret Wimauma as a different type of place,” Cintron said.

The effort appears to be paying off, said Cintron, who has heard from business owners that they are already getting more clients who either took a tour or found out about their company through coverage of the event.

It’s been an exciting experience for 12-year-old Mia Gonzalez, who helps her mother run the Antojitos y Raspados food truck on the weekends.

“I just love to see how everyone gets away so happy. It’s just so nice that people actually want to come and try the food in Wimauma,” Gonzalez said.

The remaining tours for this weekend are sold out, but you can explore some of the locations along Taco Road with this map:

Tom Cruise is reportedly quitting the Church of Scientology, but is that true?