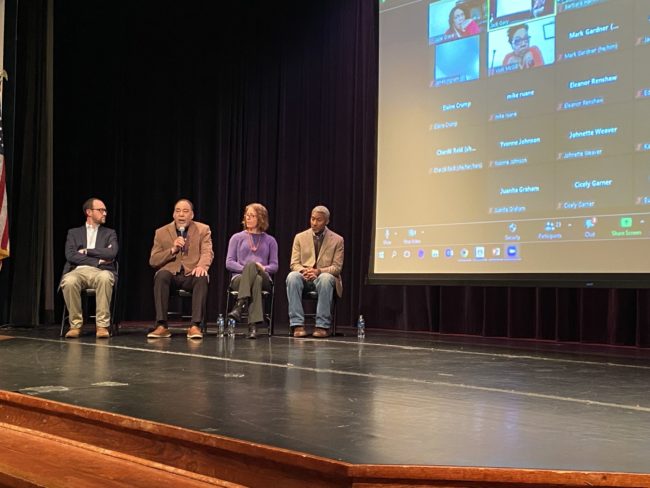 ‘We Are In A Position To Tell Our Story’: Colonial Williamsburg Investigates Three Burials at Historic First Baptist Church

WILLIAMSBURG — Colonial Williamsburg (CW) will examine three of those buried Site of the historic First Baptist Church on Nassau Street.

Connie Harshaw, president of the Let Freedom Ring Foundation, said permission from the descendant community was needed to proceed with examining the remains of three people buried at the site to determine the race, age and sex of those buried.

Among those listening in the library and via Zoom were members of the descendant community who voted unanimously for the foundation to proceed with the uncovering and study of three buried individuals.

The CW first announced in October the discovery of the foundation of the Church’s original site at Nassau and Francis Streets in the Historic Area.

During the excavation process, archaeologists have found 33 human burials on the site, although it is certain that there are more. said Jack Gary, CW director of archeology.

Archaeologists have since uncovered brand new information about the site.

An upside down wine bottle was probably found buried at the foot of a burial.

“It’s the only grave we’ve found so far that’s been marked in any way,” Gary said. “It raises questions in our minds about whether this is someone important, as well as the symbolism of the bottle.”

Gary noted that this burial is likely to be a candidate for one of the three burials being studied as it appears to have some significance.

During Saturday’s meeting, Gary also revealed that what was previously thought to be a 16′ x 20′ building is actually 32′ x 16′.

“This is great information that now allows us to envision what this structure will look like,” Gary said.

Ron Hurst, vice president of museums, conservation and historical resources, said archeological evidence contains information that helps the team determine what the building looked like and what was inside, such as: B. where the doors, windows and the pulpit were located.

While it was previously believed that white landowner Jesse Cole, who owned the property at the time, gifted the building to the community, Hurst revealed that it now appears Cole may have given the community a piece of land and the community built for it own meeting house.

“This is important information,” Hurst said. “That speaks to the strength of the community.”

Also discovered during the meeting was a list of names taken from the first roll of microfilm for the First Baptist Church in the John D. Rockefeller Jr. Library entitled Baptism, Memberships, and Death: 1865.

“It was basically a list of ‘Who’s Who’ in the black community here in Williamsburg,” Harshaw said.

Transcribed by CW archaeologists Meredith Poole, Hannah James, and Crystal Castleberry, the list includes baptisms and membership numbers from 1865 to 1885 and death rates from 1875 to 1915.

“Seeing all those names really makes those people that much more real,” Poole said.

While discussing the process of examining the remains at First Baptist Church, Gary said they decided to start with three because they believe it will give them some basic answers before moving on to a much larger project establish.

“Some of these questions that we need to answer are: How are the remains preserved? Are the skeletal remains still preserved? Can we confirm they were members of the community and of African descent? When were they buried in the ground?” Gary said. “Three is the suggested number and we believe that would give us a sample that would allow us to make decisions going forward.”

dr Raquel Fleskes, an anthropologist at the University of Connecticut, said examining three people is also important for assessing DNA conservation because DNA is not equally conserved over time.

“By doing those three, we can see if it’s possible to move forward with the other individuals,” she said. “In addition, different parts of the cemetery can be preserved differently. It’s really important to just assess what these individuals look like and what their conservation is like so we can make sure the DNA is made as sensitive as possible.”

dr Michael Blakey, director of the William & Mary’s Institute for Historical Biology, said it will take “less than a year” to confirm the race, sex and age of the three people.

“We will ensure that the work is done in a way that is safe and not visible to those who are not part of the community that follows,” Gary said.

After a unanimous vote by the descendants, Gary said the next steps, starting Monday, will be to apply for permits and write a research design.

There will then be another meeting in a few months to update the community with more details.

“I’m so emotionally full right now,” Hawther told WYDaily. “It took a long time. Two years isn’t a long time, but it is when the younger offspring are in their upper 80s or 90s. It seems like every day counts and to have their support and vote to move forward with this so we can confirm who the ancestors are is just amazing.”

“It was very difficult to come here today because we are talking about sacred sites. We’re talking about our ancestors,” said Colette Collier Roots, a descendant from Williamsburg. “Everyone from Williamsburg who was born and raised here came from the First Baptist Church. So in a way, this is like an Ellis Island for us. We want to make sure the graves and our lost are respected.”

“Now when African Americans come to Williamsburg, we can tell our story,” she added.

Church Members Committed to Communion Near and Far | rural churches