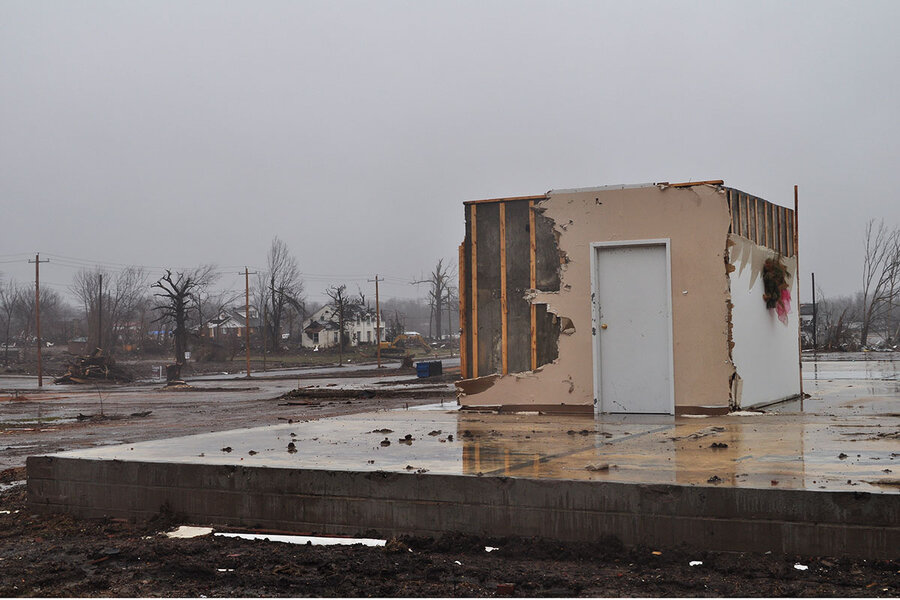 When a spate of rare tornadoes hit the Midwest and Southeast in December, the city of Mayfield, Kentucky was ground zero. The tornado that destroyed much of the historic downtown of this small, rural town did it in just a few minutes.

In contrast, the efforts of the volunteers to support the community and its residents lasted two months or more. But the reconstruction remains a task for the future – a challenge and an opportunity for Mayfield.

Why we wrote this

Two months after a devastating tornado, relief groups in Mayfield, Kentucky are still going strong. The longer-term question is how an event like this can recalibrate the city’s identity.

For decades, high streets in small towns across the US have struggled with the effects of deindustrialization and retail competition from department stores and Amazon. But places can adapt — or, in Mayfield’s case, rebuild — with robust economic strategies, says Hanna Love, a research fellow at the Brookings Institution.

Success, she says, often comes from thinking less about attracting outside companies, “and more thinking, ‘How are we remodeling so that it’s really about investing in and improving what’s on ours place is unique?’”

Jill Celaya, who owns a photography shop in Mayfield, says: “Don’t expect it to be what it was because it will never be what it was. But that doesn’t mean it can’t be great.”

Driving along Route 121 looks like anywhere else in rural Kentucky this time of year. Under a flat gray sky, the highway slices through rolling farmland, barren except for yellowing grass and stubble left over from the fall harvest.

Driving into Mayfield, visitors are greeted with the mundane trappings that can be seen near each exit: chain restaurants, a Walmart, a Mexican eatery, a chiropractor. Everything seems to be in order until the roofs suddenly turn blue: shingles have been replaced by tarpaulins. As we make our way downtown, more and more buildings seem to have bitten chunks out of them: a bite from the American Legion, a bite from FNB Bank — and a mouthful from the First United Methodist Church.

In a quarter mile, the sprawl of residential areas gives way to a flattened wasteland — entire city blocks with no standing structure, traffic lights replaced by ad hoc stop signs.

Why we wrote this

Two months after a devastating tornado, relief groups in Mayfield, Kentucky are still going strong. The longer-term question is how an event like this can recalibrate the city’s identity.

But a true lifeless wasteland wouldn’t have Shelia Reynolds or her homemade chicken soup. On a property taken over by local and out-of-town volunteers, she holds court amidst Free Food signs, a grill and pallets of bottled water. “If you are not here to minister to people, then why are we alive?” she asks, stirring a pot under a tent.

Shelia Reynolds of Graves County stirs a pot of chicken soup to be distributed free of charge to residents displaced by a tornado in December, February 2, 2022, in Mayfield, Kentucky months.

When a spate of rare December tornadoes hit the Midwest and Southeast, Mayfield was ground zero. It only took a few minutes for the tornado to level much of historic downtown. In contrast, volunteer efforts like Ms. Reynolds’s extend into the second month or longer. At the end of January, more than 350 Kentucky displaced persons were housed in state parks. Gov. Andy Beshear said the purge could take two years.

An electronic billboard flickers between ads, though many aren’t selling anything. ‘FREE HOT MEALS’ are available at a Baptist church, a panel says. Then an ad for a flower shop. A few ads later, residents are directed to another dispensary for food and water. Months after the devastation, the intensity of the tornado is matched by local volunteers and networks. But what exactly the residents are rebuilding remains less clear. Between the many lives lost, the physical destruction, and the efforts to rebuild, the tornado has shattered Mayfield’s identity as a quaint country town.

“There will be changes,” says Ms. Reynolds. She looks out over piles of rubble, toward a battered church a few blocks away—an impossible sight if the city’s buildings were still standing. “But my grandmother once told me — and she lived to be 94 — life is change.”

Angel Ruelas’ home was part of a second wave of destruction that is now altering what remains of Mayfield. Badly damaged by the tornado, the house was deemed beyond salvage and was torn down by the army of excavators and demolition crews, destroying much of the remains.

“I’m used to seeing buildings,” the sanitation worker says, pointing to the empty blocks spread out in front of him as he waits to pick up water bottles from St Joseph’s Catholic Church, where food and clothing have been stored for six days a year are available free week. “It’s – I don’t know. Time will tell I guess.”

It’s not the first time Mayfield has changed. In 1960, a General Tire plant emerged, transforming a farm-dominated economy and bringing solid-paying union jobs. Then it was closed in 2007. Malls and large stores had long suffered from local businesses in a place that once resembled a real “Mayberry,” says Jill Celaya, owner of a local photography studio.

Jill Celaya poses at her photo studio in Mayfield, Kentucky February 2, 2022. She hopes to reprint old photos and negatives from her photo studio – which was first established in 1938 – for residents who lost their family photos when a December tornado hit the city destroyed .

The city had tried to double down on its charm and nostalgia in recent years with antique shops occupying its historic downtown buildings. Still, the lack of well-paying jobs had weighed on Lee Cole, who grew up outside of Mayfield. “I have a hard time imagining, if you’re . . . a young person, what opportunities you would really have in Graves County,” says Mr. Cole, a writer who has traded western Kentucky for New York City. The destruction of the tornado is “an acceleration or acceleration of a process that has been underway for a long time.”

But given the way the community has recovered and the amount of physical changes required to rebuild the city, others are wondering if there might be better days ahead.

“We could get out of this situation better than ever,” says Ms. Celaya, who previously served on a downtown historic building preservation committee. “I think we also have a chance that we probably never would have had. I owned one of those old buildings in Court Square; I know what it takes to maintain this. The ones that are left – I hate to say this, but I’m not sure we could ever have restored them to their glory.”

For decades, high streets in small towns across the US have struggled with the effects of deindustrialization, big department stores, and more recently Amazon and online shopping. But there are ways to adapt — or in Mayfield’s case, to rebuild — with a view to resilient economic strategies, says Hanna Love, a research fellow at the Brookings Institution who majored in urban planning and small-town economics.

“The success we have seen is [from towns] I’m really trying to break away from that idea: ‘How do we rebuild to attract outsiders or external companies?’” says Ms. Love. “And more like ‘How do we rebuild so that it’s really about investing in and improving what’s unique about our place?'”

Small, rural towns that have successfully revitalized themselves in recent years, she says, “have done so by investing in the trade corridors and reinventing them… and really focusing on adding a sense of place and more experience.” support financially. based economy.”

That means adopting policies that support local businesses rather than chasing after big chains, and building public spaces like parks or plazas—while also asking citizens for input. It’s also a way of assessing who was on the losing side in Mayfield’s Old Economy, notes Ms. Love. At Mayfield Consumer Products, for example — the candle factory that came under national scrutiny after nine workers died when the complex was hit by the tornado — hourly wages started at $8.

Ms. Celaya spent the first few days of recovery organizing and distributing food and clothing donations, which arrived at the airport in small private planes. When a band with ties to Mayfield wrote a song to raise funds, they shot their music video in their photo studio.

Get stories that
empower and uplift Daily.

But despite her focus on the future, she keeps an eye on the past. The studio she owns was founded in 1938. She hopes to find physical negatives from the early days and help families replace their own lost photos – once they have walls to hang them on.

“Don’t expect it to be the way it was because it will never be the way it was,” she says, citing a principle that helped her after her husband’s death. “But that doesn’t mean it can’t be great.”