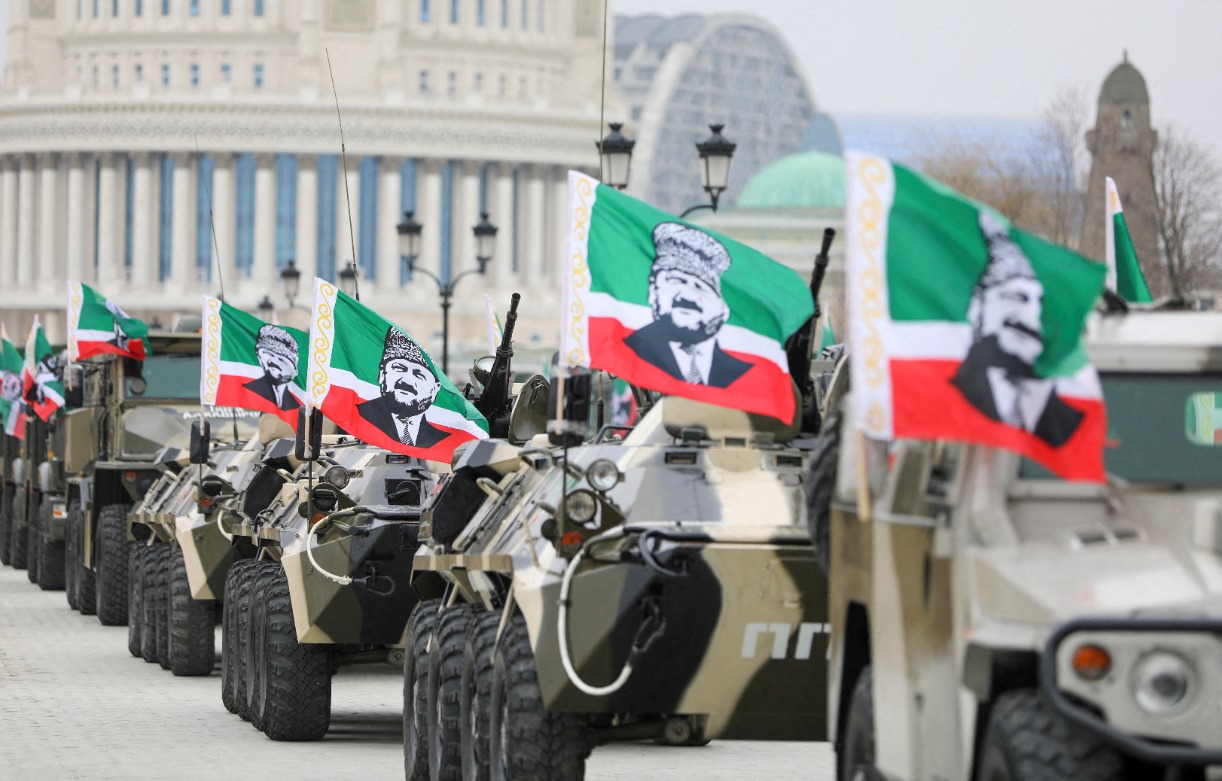 Russia’s ill-fated invasion of Ukraine recalls Britain and France’s Suez campaign in 1956. The humiliating withdrawal of Britain and France marked the end of their status as first-rate powers and the beginning of a troubled period of political crises and territorial losses to independence movements.

History can repeat itself. Russia fails in its attempt to occupy Ukraine. Russia is suffering severe losses in terms of military capability, economic strength and international reputation. It is now clear that Russia is not a major power in the same league as the US and China. And it’s entering a period of political turmoil that will likely include renewed demands for independence from its constituent republics in a repeat of the collapse of the Soviet Union.

The Suez and Ukraine Crisis

In 1956 Britain and France seemed strong. They were the youngest victors in World War II, dominant European powers, permanent members of the UN Security Council and rulers of vast colonial empires. They felt strong enough to invade Egypt and prevent President Gamal Abdel Nasser from nationalizing the Suez Canal. But then the real superpowers of the day protested – the United States threatened economic penalties and the Soviet Union threatened military reprisals – and Britain and France were forced into a humiliating retreat.

British Prime Minister Anthony Eden has been accused of lying to the House of Commons and has been forced to resign. Sensing weakness, the British colonies intensified their drive for independence. The pro-British Iraqi monarchy fell in 1958. Cyprus and Malta became independent shortly thereafter. By 1967 more than twenty British territories were independent.

The crisis in France was even worse. The Suez withdrawal came two years after the French garrison at Dien Bien Phu surrendered to the North Vietnamese, and some military officers attributed those defeats to a spineless political class. In 1958 a group of military officers and colonial officials staged a coup in Algeria, the Fourth Republic collapsed and Charles de Gaulle took power as head of the Fifth Republic. The Algerians won their long war of independence in 1962 and 900,000 Europeans fled to France, fearing reprisals. Freedom movements gained strength in the French colonies.

Vladimir Putin’s Russo-Ukrainian war was an overstatement and will force Russia to recognize its borders and diminished status. It is likely to face renewed calls for independence from constituent republics and territories.

The whole world is witnessing the vaunted Russian army’s inability to project violence, even in a neighboring country a third its size. The Russian economy is collapsing under the costs of the war and sanctions: inflation is heading towards 20 percent, the economy will shrink by 10 percent this year, the Russian stock exchange is dysfunctional, and Russian stocks traded in London are down 90 percent . The impact of the very harsh and sweeping sanctions imposed on Russia by most of the world’s major economies will only increase over time.

Equally sobering are the global political consequences of the invasion. Russia has no important allies in this war. China offers only tacit support. Belarus is an ally but has little to offer. Almost all of Europe, the United States, Canada, Japan, Australia and many other free-world countries are now opposed to Russia and actively helping Ukraine.

These grave challenges are being met by a fragile political system built around Putin’s personal dictatorship. Vyacheslav Volodin, his deputy chief of staff, famously summed it up with the words “Without Putin, no Russia”. Putin will have to increase domestic repression even more to cope with growing dissatisfaction with the war. But even that has its costs and limits: Russia’s security apparatus today has more people than its armed forces and more people in prison than in Brezhnev’s time.

The invasion of Ukraine was a major misjudgment. Putin thought it would be like invading Hungary in 1956 or Czechoslovakia in 1968, which would make the Soviet Union stronger. It is more akin to the 1979-1989 war in Afghanistan, after which the Soviet Union disintegrated and several of its constituent republics became independent.

Precedents of independence movements in the Russian Empire

It is not unprecedented for Russia’s constituent republics to call for independence when Moscow is weak.

The Russian Revolution of 1917 was one such moment. Several republics declared their independence at the time, and some remained independent for years. Among them were Lithuania, Latvia, Estonia, Tatarstan and the republics of the North Caucasus.

After the collapse of the Soviet Union in 1991, several republics of the USSR became independent countries: Moldova, Belarus, Ukraine, Georgia, Armenia, Azerbaijan, Kazakhstan, Kyrgyzstan, Uzbekistan, Turkmenistan, Tajikistan and the Baltic republics of Lithuania, Latvia and Estonia.

The process of dissolution may have gone even further, as several other Russian regions – including Siberia, the Urals, Karelia and Tatarstan – declared their “sovereignty” at the time. To prevent further territorial losses, President Boris Yeltsin proposed a federation, promising the republics as much “sovereignty as [they] could swallow” and negotiated deals with troubled regions.

What is driving independence claims in Russia today?

The Russian Federation consists of eighty-five “federal subjects” or constituents, twenty-two of which are republics named after non-Russian ethnic groups. Russia has over 190 ethnic groups, and many of them live in remote places like Siberia and the Caucasus region.

Why should they break up? For two main reasons: economic and cultural.

Today’s Russia, like the Soviet Union before it, is not an economic success. Russia is a middling economy with a GDP on the order of Spain or Texas. GDP per capita is even less impressive: in the World Bank 2020 Index, Russia ranks eighth-fifth, between Bulgaria and Malaysia.

Alexei Kudrin, a former deputy prime minister and finance minister and perhaps the most influential Russian economist, argued in a 2018 interview that Russia, like the USSR, could fall apart if “the Russian leadership doesn’t get rid of the Soviet mentality”. He cited oil dependency, sanctions, limited access to technology, labor shortages and low labor productivity as risk factors.

Many of the republics and regions have closer ties with other countries than with Russia. They feel they get little to no benefit from the central government in Moscow, which they see as corrupt and incompetent.

The other main motivation is cultural. Russia expanded from its European core primarily through wars of conquest, most of which were long and bloody. It maintained its rule through terror, often relocating populations to distant lands.

The Russian state is blatant about the centrality of its Slavic culture and the privileged role of the Russian Orthodox Church, a key supporter of the regime (the church leader dubbed the Putin era a “miracle of God”). This does not go down well in many republics with non-Russian and non-Christian majorities.

But there is more to it than that. Today’s rulers in the Kremlin do not have the mystical appeal of the tsars who have ruled Russia since the 16th century, who were seen by many as the anointed of God and successors to the emperors of Constantinople, the Eastern Roman Empire. Nor can they make the communists’ inspirational (albeit fraudulent) claim that they govern for the benefit of the oppressed.

The peoples of Russia know that Putin and his oligarchs, indeed the entire power elite, are ex-Soviet bureaucrats who have become fabulously rich looting the country. The Putin regime has no unifying ideology beyond defending Russia against a perceived hostile West.

In some cases, Putin himself has unleashed the forces of national dissolution, claiming that Russia can occupy Ukraine and Crimea because they “historically” belonged to Russia. Following this logic, several republics and territories could declare their independence because historically they were not part of Russia.

The semi-autonomous Russian enclave of Kaliningrad was not acquired from Germany until 1946 by the Soviet Union. It lies between Poland and Lithuania, both EU countries, and has no border with Russia. The Republic of Karelia (population 600,000), neighboring Finland, was acquired by Stalin after his 1940 war of aggression against Finland.

Other republics have tried to be independent before.

The Caucasus republics occupied in the 19th century have Muslim majorities, are ethnically distinct from Russians, and have borders with other countries. The Chechen Republic (population 1.2 million) waged a determined and bloody war of independence in the 1990s.

The Chechens may be joined in a claim for independence by other neighboring Caucasus republics, including Dagestan (2.5 million people), Ingushetia (300,000) and Kabardino-Balkaria (900,000). A mountain republic of the North Caucasus existed between 1917 and 1922 as a country formed by Circassians, Chechens, Ingush, Ossetians and Dagestanis.

In the Volga region lies the Republic of Tatarstan, home to two million ethnic Tatars and 1.5 million ethnic Russians. It declared its independence in 1917, 1990 and again in 2008. It was an independent khanate conquered by Ivan the Terrible in the 15th century.