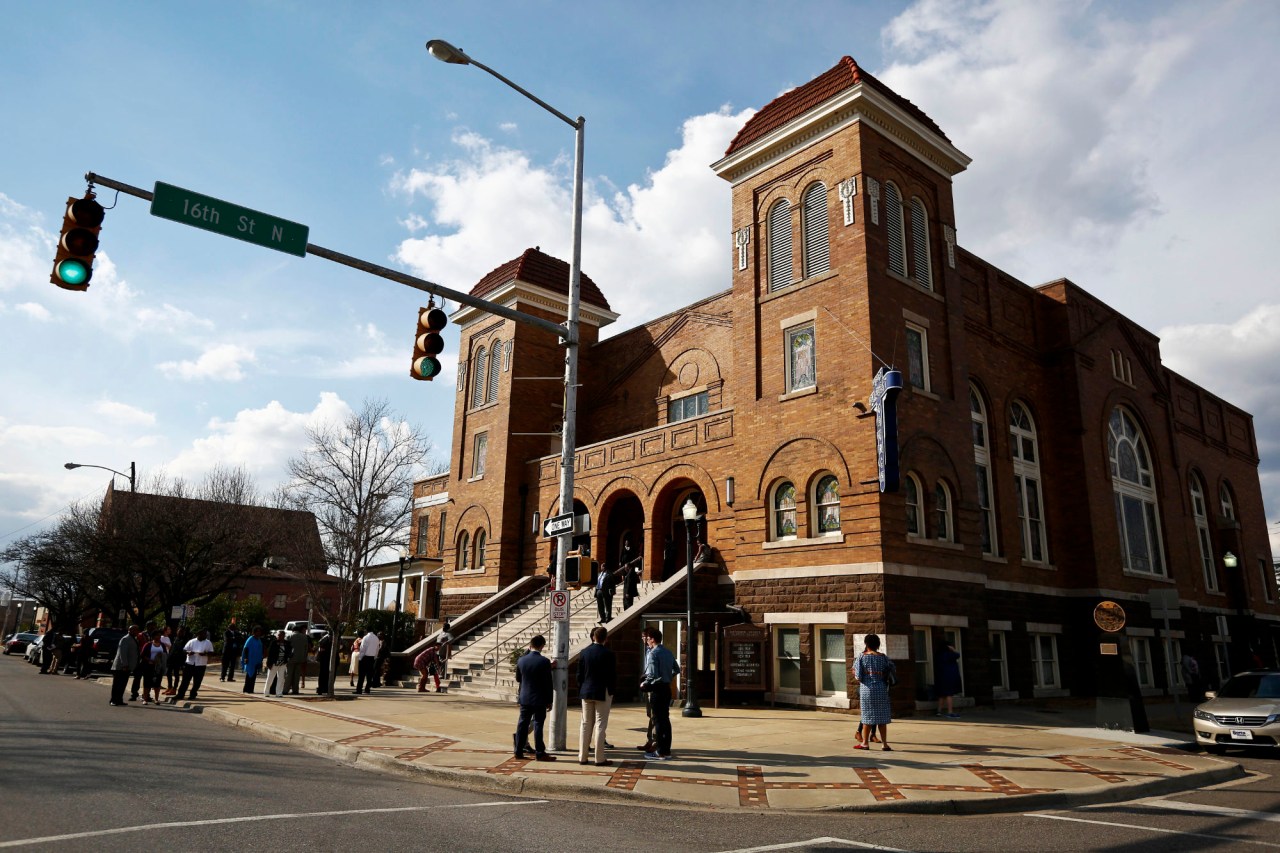 The Black Church: Back to Building Wellbeing in Black Communities

BIRMINGHAM, Ala. (WIAT) – Life for the black church in America, to borrow a line from Langston Hughes’ poem Mother to Son, “was not a crystal staircase”.

In the poem, the mother urges her son to keep climbing these stairs and not to give up, even if he encounters nails and splinters along the way. The Black Church has been the mother of blacks in America since Reconstruction.

This Black History Month, with its theme of Black Health and Wellbeing, provides an opportunity to look back at what the Black Church as an institution has meant to the wellbeing of generations of African Americans.

The Alabama African American Civil Rights Heritage Sites Consortium was formed to preserve this history. Priscilla Hancock Cooper, Executive Director of the Consortium, said: “Scholars and researchers who have written about the Black Church have recognized its role as the primary economic, societal-civic leader and cultural leader in the community. A catalyst for change and self-determination. Many of our churches were founded right during Reconstruction or in the early 21st century, so they played that role at a time when the African American community was under siege. The victim not only of segregation, but also of this virulent violence.”

Half a century later, on June 17, 2015, a white supremacist shot dead nine people during a Bible study at the Emanuel African Methodist Episcopal Church, better known as “Mother Emanuel,” in South Carolina. opened fire. Pastor Clemente Pinckney, a South Carolina State Senator, was among the victims. The church has been targeted for 200 years for its importance to black people in America.

The Alabama African American Civil Rights Heritage Sites Consortium consists of 20 sites of similar historical importance, spanning from Birmingham to Montgomery and Selma. The list includes famous places of worship such as 16th Street Baptist Church, Dexter Avenue King Memorial Baptist Church, Brown Chapel AME and Bethel Baptist. But there are other locations on the site that were just as significant to the freedom struggle, although they may not be as well known.

“They could not have done this work without many of the partners, without the St. Paul AME, which is directly across from the Sixteenth Street parking lot, where students were educated and prepared to take part in demonstrations,” said Hancock Cooper. “Like the First Colored Baptist Church in Selma, where SNCC (Student Nonviolent Coordinating Committee) staff were busy preparing people to register to vote. And like Trinity Lutheran Church, where the vicarage is actually the place that is part of the consortium. A Lutheran church that used a white pastor to lead a black congregation. This pastor was very involved with the Montgomery Association and worked with Dr. King and others together. And because of his activism within the Montgomery Bus Boycott Movement, the vicarage was bombed. None of his family was hurt.”

The historic stained glass Wales window at 16th Street Baptist Church, with its image depicting a black Christ figure as a suffering servant, shows how beauty can come from ashes. The church stands tall on the same corner it has occupied in Birmingham for over 150 years, but it is “life is not a crystal staircase”.

Arthur Price, a 16th Street Baptist pastor who has led the church for the past 20 years, said that historically the church in Birmingham has been much more than just a place of worship. Originally, the Church had a different name and location when it was organized in 1873, ten years after the Emancipation Proclamation.

“A group of African Americans wanted to start a church where they could feel validated. So they organized the First Baptist Church for Colored People. This church was on 4th Avenue and 12th Street and was condemned by the city,” Price said. “They moved that church here later in 1880 (16th Street and 6th Avenue North). And this is actually the second building on this site, the first building was condemned at the turn of the 20th century because they said the steeple broke the code of Birmingham and they said they should tear it down and they did. ”

The current church was designed and built by Wallace Rayfield. The 16th Street Baptist Church became known as “everyone’s church.”

Price said, “It was the soul being, it was the pulse of the community, everything you wanted to know about the community emanated from the Black Church.” For example, the first black bank in Alabama, Penny Savings and Loan, was founded by Rev. William Pettiford, third pastor of 16th Street Baptist Church.

The church wasn’t originally as vocal about the civil rights movement, but that changed in 1963. Children’s Crusades was started in 1963 down the steps of 16th Street Baptist Church, just across from Kelly Ingram Park. The televised brutality of fire hoses and dogs being unleashed on protesters would break the back of Jim Crow’s racial segregation and lead to the Civil Rights Act.

The larger credit played by the church in the Birmingham campaign, led by King and Rev. Fred Shuttlesworth of nearby Bethel Baptist, placed a target on the church that led to the 1963 bombing.

Price said: “If you think about Mother Emanuel and Sixteenth St. Baptist Church, it was 14 years before the first perpetrator of the Sixteenth Street Baptist Church bombing was brought to justice. It took 14 hours to capture Dylan Roof. The whole Black Lives Matter movement. You can go back as far as 1963 with the four little girls, and when that case was prosecuted, the message was sent to the world that black lives matter. Because the case was closed by the FBI in 1967-68, but then reopened by Attorney General Bill Baxley to let the world know that what happened here in September 1963, that black lives matter. And I think that sends a strong message, and every time we follow a case of injustice against black lives, it says that those lives matter from the back.

The church has a museum and daily tours to tell its story to visitors from around the world to learn more about its role in the nonviolent struggle for civil rights and what it means to the people of Alabama and across the country.

“It was great,” Price said. “We’ve been able to work with other civil rights sites and we can learn about their history as well to help elevate their story. You can also share how we got our story out there and how important it is to tell the story.”

The history of the Black Church and how it has contributed to the health and wellbeing of Black people in America can be summed up in the words of Clara Ward’s song performed by Mahalia Jackson at the March on Washington: “How I Got Over? You know my soul looks back and wonders how I got through it.”

Rev. Albert Paul Brinson, retired associate general secretary of American Baptist Churches USA, said, “That was all we had, that was our strength to sustain us.” Brinson grew up with King, who was 10 years older. and a father figure for Brinson. He saw the role the church played in organizing people and preparing them mentally, spiritually, and physically for a nonviolent movement that uplifted not just black people but the entire nation. Brinson said: “Black people aren’t going to churches en masse now. You can go to some of our leading historic churches and remember I’ve worked with thousands of churches and it’s a different kind of thing.”

Priscilla Hancock Cooper points out one reason black churches have smaller congregations, “those churches were centers of fellowship.” She said: “As these communities were devastated by urban regeneration and a national trend to build superhighways and have them destroy black communities, the neighborhoods that supported them were decimated. So now we face the challenge of how to continue this role as a soul, a moral compass, a place of refuge, support and strength at this time when communities themselves have changed so much?

Cooper said they hope that by preserving the sites in the Alabama African American Civil Rights Heritage Sites Consortium, they “can help reclaim their role as a catalyst within the community.” They can actually be a very important tool in that revitalization and rebirth.”

Brinson pointed to the power of the church, which he called the gospel.

“That was the main thing and it has to be now,” Brinson said. “The power and might and message and hope of the church is not diminished, we could diminish it, but the message of the church and of Jesus Christ is still the same.”