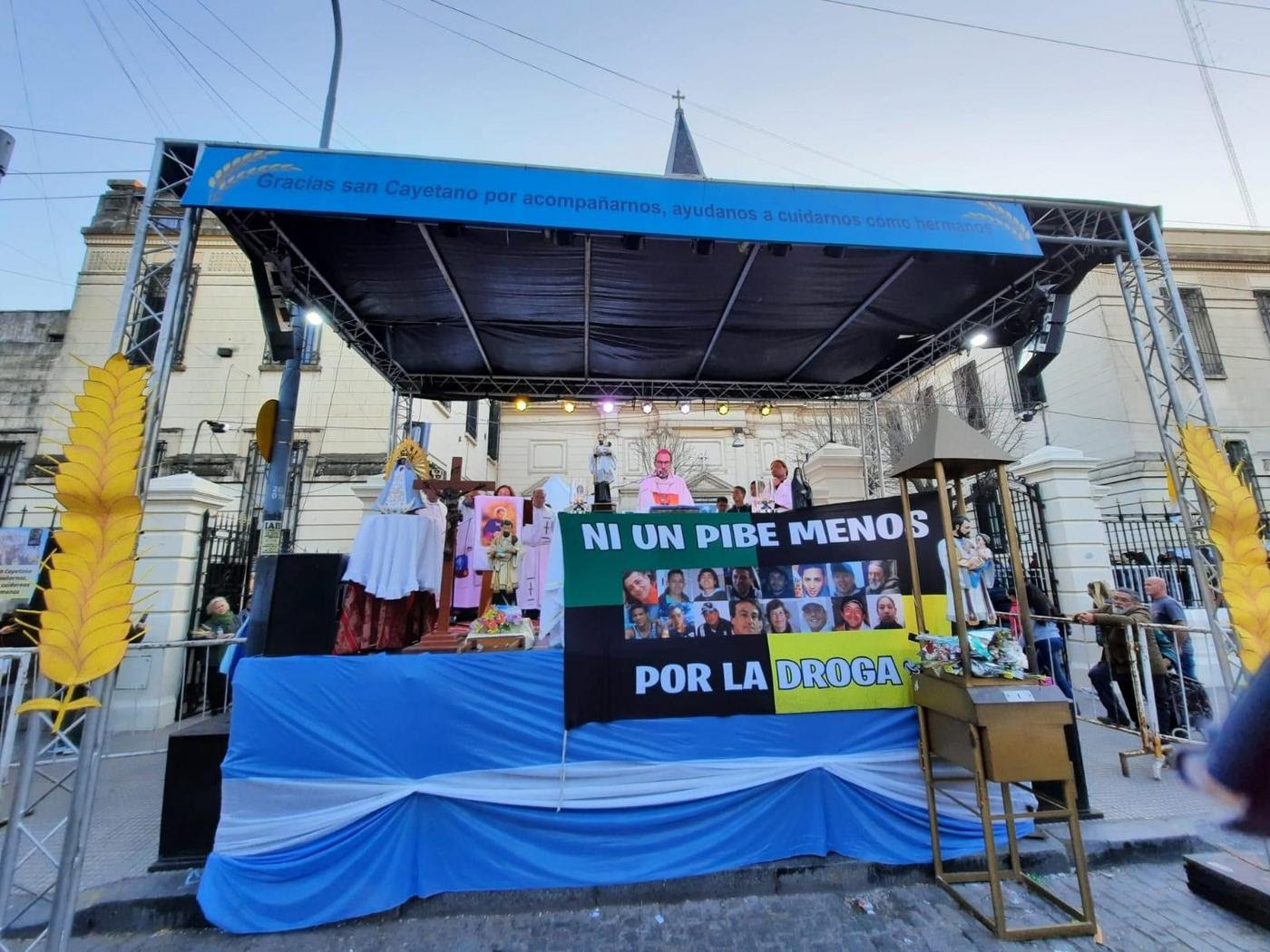 ROSARIO, Argentina – A group of “Slum Priest” in Argentina has established a year-long pilgrimage with an image of Our Lady of Lujan, the Patron Saint of Argentina, to raise awareness of the growing problem of drug addiction in the country.

The Big Family Hogar de Cristo (FGHC) started the project on August 7th from the San Cayetano Sanctuary in Buenos Aires. Pilgrims will carry a replica of the image through the Hogar de Cristo drug rehabilitation centers located throughout Argentina.

The inaugural Mass of the pilgrimage was celebrated by Auxiliary Bishop Gustavo Oscar Carrara, Episcopal Vicar for the slums and popular neighborhoods of Buenos Aires and Vice President of Caritas Argentina.

However, the sermon was preached by Father Jose Maria “Pepe” Di Paolaone of the slump priests and president of the Federación Familia Grande Hogar de Cristo, which he called “places of compassion”, “as Jesus asked us, places where we welcome those whom society discards”.

“We want an Argentina where no one dies from drug addiction and we will go around Argentina with our pilgrimage image,” he said.

Di Paola stressed that many of those joining the march are young people who have recovered from drug addiction through dozens of centers run by the Catholic Church in Argentina at the express request of Archbishop Jorge Mario Bergoglio at the time, better known today as Pope, has set up Francis.

“We started this walk to pass on that same hope to other young people who don’t have it today,” he said.

The first Hogar de Cristo was inaugurated at Easter 2008 by Bergoglio washing the feet of a group of victimized teenagers during the Mass of the Last Supper on Maundy Thursday Pacois considered the cheapest illegal drug available on the streets of Buenos Aires.

Paco is what’s left of the narco kitchens that produce cocaine destined for the United States and European markets and is a highly addictive concoction of raw cocaine cut with chemicals, glue, broken glass and rat poison.

“We will celebrate 15 years of life and 10 years of presence of our Pope Francis in March, when this tour of the country ends,” Di Paola said.

Thousands of young men and women – some as young as 9 years old – are addicted to the drug, known locally as muertos vivientesthe living Dead.

The traveling image is accompanied by a flag representing many of the children and young people who have lost their fight against drugs, as a reminder of what they are working for: “An Argentina where we can prevent use but also help those who… are already in hiding with drugs. We want them to receive what Jesus asked of us: that the good Samaritan, who raises the fallen, be in the heart of every Argentine,” said Di Paola.

The date chosen for the beginning of the pilgrimage – August 7th, the feast of Saint Cajetan, known in Argentina as the patron saint of work and bread – was no coincidence.

The priest called the shrine “the best place to start this walk, so that St. Cajetan listens to the despair of so many young people immersed in drugs that find no meaning in life, the despair of mothers who cannot find a place or the way of giving their children reason to live with joy and hope. We know he will listen to you. He will listen to all of us.”

Earlier, Cardinal Mario Aurelio Poli, chosen by Pope Francis to be his successor in Buenos Aires, celebrated Mass for thousands of pilgrims.

The festival has long puzzled politicians as it serves as a social thermometer in a country in constant economic turmoil.

Poli took the opportunity to point out the social grievances in the country.

“The bread that nourishes our lives and that is becoming more unattainable every day due to the stifling inflation we are suffering, creating misery,” he said.

Poli expressed concern at the increase in people who need social assistance to survive amid the economic crisis that has left half the population living in poverty and monthly inflation higher than that in Venezuela.

“How can we not think of the growing number of brothers and sisters who come to the soup kitchens every day, of the elderly who cannot buy their medicines, of the families whose income is becoming increasingly insignificant?” asked Poli.

The doors of the sanctuary opened at midnight when people of all ages queued for more than seven blocks to enter.

“When other doors close, the doors of the sanctuary open,” he said, emphasizing the strong devotion to the patron saint of bread and work.

Poli called for “a benevolent look at reality, not to be outraged, but to be moved and engaged”.