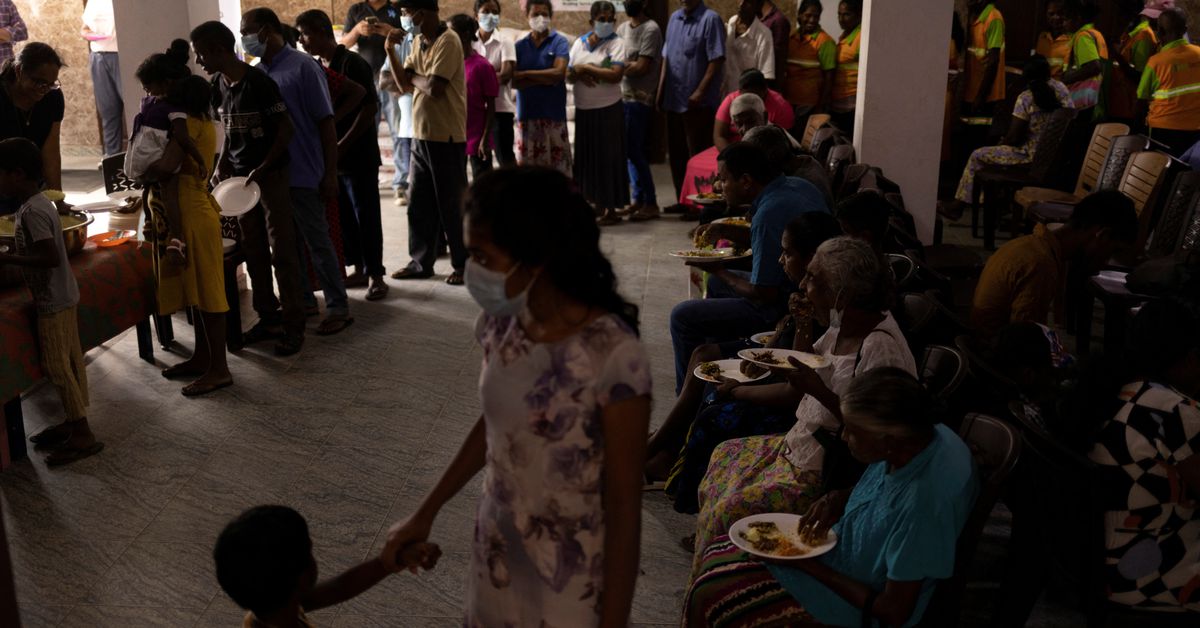 COLOMBO, July 27 (Reuters) – With no fuel and no money for groceries, HG Indrani and her family of nine trudged for an hour to a communal kitchen in Colombo hoping to find a simple vegetarian meal.

Rampant food inflation and chronic shortages of cooking gas and petrol are making daily life a struggle for millions amid Sri Lanka’s worst economic crisis since independence from Britain in 1948.

“There is no income,” said Indrani, one of hundreds lining up in the midday sun outside a makeshift kitchen run by a church. “Most of the time there is no food, we suffered a lot.”

The price of a kilogram of rice has risen to 250 rupees from 90 rupees six months ago, she said.

“There is no food at home,” added the 57-year-old. “We will have to suffer even more. We only want to eat to survive.”

Two dozen volunteers cook rice, dice onions and scrape coconut flesh while cooking over open fires due to the lack of gas on the flat roof of the church near Sri Lanka’s Parliament.

“The need is so great,” said Akila Alles, chief operating officer of the Bethany Christian Life Centre, which has set up kitchens in 12 of its churches and has been serving food to about 1,500 people daily since June.

Conditions are so dire that more than 5 million Sri Lankans have reported being forced to skip meals to make ends meet, the World Food Program said on Twitter this week.

Months of anti-government protests, which came to a head this month after thousands stormed government buildings and toppled former President Gotabaya Rajapaksa, have crossed religious and ethnic lines in the diverse Indian Ocean nation.

Catholic nuns and Buddhist monks have been regularly seen at protests, and communities have worked together to meet the growing humanitarian needs.

Donations even came in from China and Vietnam, with a Buddhist monk delivering a large donation of rice to the church.

“Sometimes people who come here don’t have anything at all,” said one volunteer chef, KD Irani, as he stirred a cauldron of dal or lentils.

“I’m 66, but I’ve never experienced a crisis like this in my life. We do this for the love of people.”

Reporting by Alasdair Pal in Colombo; Adaptation by Clarence Fernandez

6 days to the INEC deadline, millions could miss registration