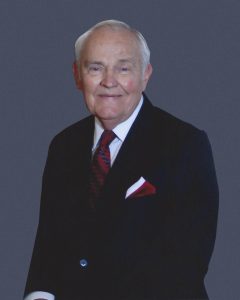 He was born in Litchfield on April 18, 1938 and then moved to Willmar where he grew up and attended school. After graduating high school, he proudly enlisted and served in the US Navy. After four years, he enrolled at St. Cloud State University, where he met his soul mate and wife Regina. They were happily married in 1960. Robert graduated from St. Cloud University in 1962. After graduating, his career quickly took off in Minneapolis, where he worked as a sales representative for Control Data Corporation (CDC). Business opportunities quickly took the family south to Cocoa Beach, Florida (1964) and then to Orlando, Florida (1966) where he sold mainframe computers to large corporations and institutions throughout Florida. In 1967, after much success at CDC, Robert resigned from CDC and moved his family south to Naples, Florida, where he transitioned into entrepreneurial commercial real estate development.

In retirement, Robert and Gina spent their summers in Glenwood and their winters near their sons and grandchildren in Debary, Florida. Robert loved golf which he tried to play several times a week with Gina and friends. He was an avid reader. Since childhood he loved to hunt and actively hunted pheasants, ducks and geese until his health no longer cooperated. He was a devout Christian and very involved in the Lutheran Church, having helped establish two from the ground up.

He is survived by his 62-year-old wife Regina; sons, Keith (wife, Debra) and Stephen (wife, Annette); and brother William (wife Kay). Also surviving are his grandchildren Tiffany, Robert, Christina and Erik; and great-grandchildren, Trevor and Levi. He will live in our memories forever.

Worship services will be held on Saturday, October 29, 2022 at 11:30 am in the Chapel of St. Luke’s Lutheran Church, Oviedo, Florida. Robert will be buried immediately afterwards in a private family service at St. Luke’s Cemetery.

The family would like to express their heartfelt thanks to the team at Westminster Baldwin Park, Vitas and everyone who has supported us through this time of loss.

In lieu of flowers, the family is asking for donations to the St. Luke’s Lutheran Church Scholarship Fund.