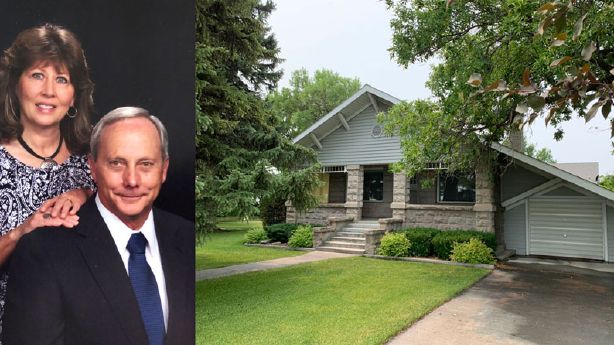 Shelley and John Hegsted’s 3,200-square-foot home sits on 100 acres across from Walmart in Rexburg, Idaho and is becoming the site of a new temple. (Shelley Hegsted via EastIdahoNews)

REXBURG, Idaho – Members of The Church of Jesus Christ of Latter-day Saints were surprised to hear the announcement of a second temple in Rexburg over the weekend.

EastIdahoNews.com has learned that it will be built on land in North Second East and Moody Drive across from Walmart.

Shelley Hegsted, who owns the property with her husband John and his three sisters and their spouses Marcia and Don Heinz, Marilyn and Larry Evans, and Diane and Lewis Clements, says the church bought the 100 acre property in July after months of negotiations.

Shelley and John’s 3,200-square-foot home takes up about an acre in the southeast corner of the property. The rest is farmland. She doesn’t know any details about the project or when it will start, but she says they have until July 2022 to move out.

“Our family has been in this house since 1914 when it was built,” says Shelley. â€œIt was a wonderful place to raise our family, but since town moved away and Walmart came it’s been so crowded. It’s no longer a fun corner to live in. “

Still, Shelley says the thought of giving up a piece of land that her family has owned for three generations is sad. They’ve been trying to sell it since 2005. Around 2008, Home Depot and Fred Meyer planned to build a store at the location, but later retired when the economy waned.

It was a wonderful place to raise our family, but since town moved away and Walmart came it’s been so busy. It’s no longer a fun corner to live.

Other deals over the years never seemed to work and the Hegsteds ended up thinking that selling the land just wasn’t supposed to be.

The couple eventually sold part of it to Kurt Harmon, a local business owner, in the spring, and it wasn’t long before a church official reached out to both parties to express an interest in buying the entire property.

Knowing that Latter-day Saints are taking over makes Shelley, a lifelong member of the Church, happy. She is sure that it is in good hands.

“We were very humbled to think that this is a place for a temple. We really can’t believe it,” she says. “Whatever you do, it will be done right and nicely. We couldn’t be happier. It will be beautiful.”

Rexburg Mayor Jerry Merrill says the church is planning additional commercial development in addition to the temple. He’s not privy to the details, but he’s excited about the prospect of the additional income and attractiveness the project will bring to the region.

“There are very few places in the world that have two temples within the same city limits, and we will be one of them,” says Merrill. “Having a temple in the city makes the area feel nice. It has a sense of awe and spirituality that help keep crime down. Anything that helps in these aspects is always exciting for us Thing.”

There are very few places in the world that have two temples within the same city limits and we will be one of them.

Today’s Rexburg Temple was consecrated in 2008.

Rexburg Chamber of Commerce president Chris Mann said he had heard rumors of another temple coming to Rexburg prior to the announcement on Sunday, but he never dreamed that this would actually be true.

“This is exciting for Rexburg. It is always nice to know that the LDS Church has great faith in the city of Rexburg. We have great students and great citizens. I look forward to seeing how they develop the property we have purchased,” says man.

After completion, the Rexburg Temple will be open to the public during an open day. Once it is inaugurated, only members who have been approved by their church leader are allowed to enter.

The Rexburg Temple is one of 13 temples announced during the Church’s biannual general conference. Additional temples have been announced in Cody, Wyoming and Heber Valley, Utah. One of the most recently completed temples is in Pocatello. It will be inaugurated on November 7th.

Read the full article at EastIdahoNews.com.

St. Paul community leaders are “heartbroken” after 15 people were shot and one was killed in the bar