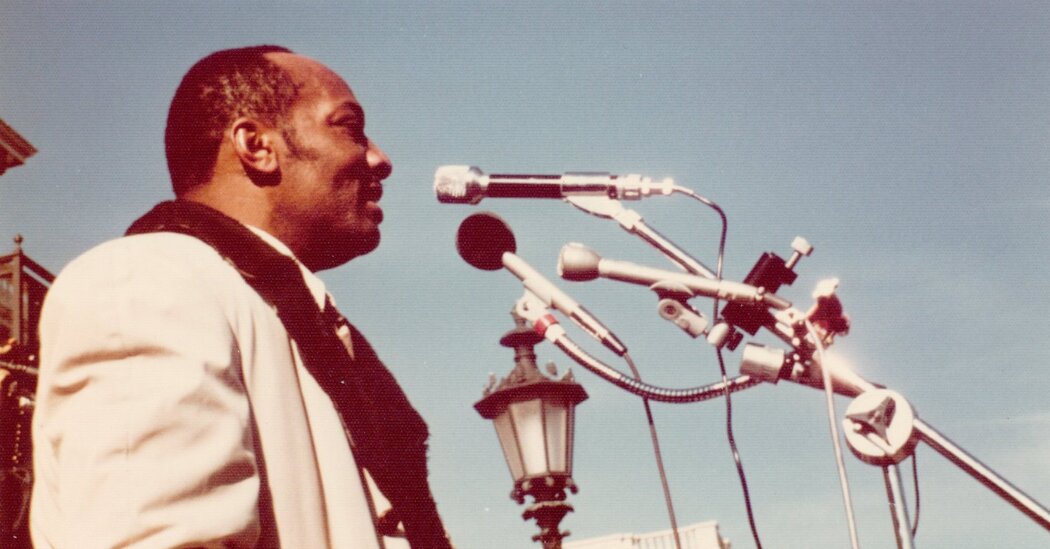 Pastor Dr. W. Sterling Cary, who bravely joined other black religious leaders in 1966 to reconcile nonviolence and demands for black power and who was later elected the first black President of the National Council of Churches, died on Sunday at his home in Flossmoor , a suburb of Chicago. He was 94.

The cause was heart failure, said his daughter Yvonne Cary Carter.

Cary was unanimously elected in December 1972 by the largely liberal National Council of Churches, the largest ecumenical body in the United States. He was in office until 1975. His choice set a precedent in which he expressed the hope that it would go beyond the symbolism of the 1960s.

“The symbolic victories don’t mean much to me,” he told the New York Times in 1972. â€œA black person is elected to congress or mayor of an almost dead city. That strengthens an individual, not a people. “

Mr. Cary was pastor of Grace Congregational Church in Harlem in 1966 when he helped organize the Negro Churchmen’s ad hoc national committee. In the July 31st issue of The New York Times, the committee published an advertisement promoting calls for black power made by Stokely Carmichael, the newly appointed national chairman of the Student Nonviolent Coordinating Committee, and his students, who identified many white clergymen and civil rights leaders as anti-Americans and antichrists.

“What we see through the diversity of rhetoric is nothing new, but the same old power and race problem that our beloved country has faced since 1619,” wrote the clergy, referring to the year in which black slaves became first introduced later in the United States.

While stressing that they did not view power as a pursuit of isolation or domination, their statement condemned and left American officials â€œputting a white noose of suburbia around blacksâ€ and banishing them to unemployment and dilapidated and still segregated schools not protected by laws against discrimination that has not been enforced.

Mr Cary would later ponder that the interracial coalition that promoted civil rights in the 1960s imploded when the movement began to challenge racial inequality in the north.

What came to be known as Black Liberation theology was repeated decades later when Barack Obama ran for president in 2008 and was asked if he shared the views of his own minister, Rev. Jeremiah Wright, an apostle of that theology. In an interview with NPR That year, Mr. Cary described Mr. Wright as “a prophetic voice who still urges the nation to take a step toward full justice for all of its people”.

William Sterling Cary was born on August 10, 1927 in Plainfield, NJ, to one of eight children to Andrew Jackson Cary, a real estate agent and YMCA administrator, and Sadie (Walker) Cary, a homemaker.

He ran for the student body president of his predominantly white high school and believed he won by an overwhelming majority. But the dean informed him that according to the official results, he had been beaten.

He decided that he would be more comfortable in an all-black school and decided to enroll at Morehouse College in Atlanta.

Ordained in the Baptist Church in 1948, he was elected President of the Student Union at Morehouse that same year and graduated with a bachelor’s degree in 1949. He enrolled at Union Theological Seminary in Manhattan, where his fellow students elected him the first black class president. In 1952 he graduated with a Masters in Divinity.

He later served in Presbyterian and United Church of Christ congregations, including pastoring the Butler Memorial Presbyterian Church in Youngstown, Ohio. For three years he served in the multiracial, interdominal Church of the Open Door in Brooklyn.

Mr. Cary was pastor of Grace Congregational Church from 1958 to 1968 when he was named New York Borough Administrator of the United Church of Christ. In this position he led around 100 congregations with more than 50,000 congregation members.

He was 45 years old and lived in Hollis, Queens, when he was elected President of the National Council of Churches. Ebony magazine named him one of the most influential African American people in the United States at the time.

In 1994 he was elected Minister of Conference of the United Church of Christ’s Illinois Conference. He was the first black man in this role to lead around 250 parishes until he retired in 1994.

In addition to his daughter Yvonne, he leaves behind his wife Marie Belle (Phillips) Cary; two other daughters, Denise and Patricia Cary; one son, W. Sterling Jr .; two grandchildren; and three great-grandchildren.

In his 2008 NPR interview, Cary said the United States had made “tremendous strides” toward racial justice, but added a caveat.

â€œThis is a different world than the world I was born in and grew up in, but it’s still a world in need of perfection,â€ he said. “There are all sorts of conditions crying out for a nation reaction.”

He said he was impressed with the way Americans saw Rev. Dr. Martin Luther King Jr. celebrate “I have a dream”.

Do you want a truly heavenly home? Why church conversions are on everyone’s lips