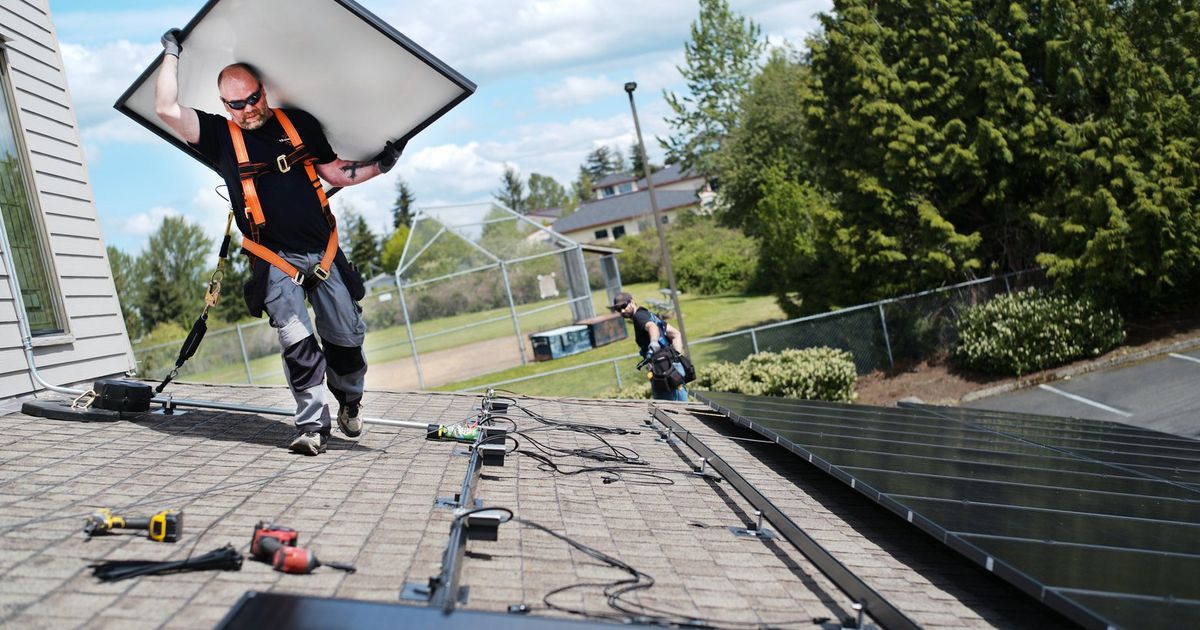 Puget Sound Energy spent nearly $1 million on solar projects in Western WA this year. This is what one looks like

KENT — Fleeting sunlight offered a brief dose of warmth — and energy — just as the final solar panels were being installed on the Kent United Methodist Church this spring. Children running across the parking lot below watched electricians heave panels onto the roof. Her mother craned her neck as she pushed a stroller, also intrigued.

When complete, the array is expected to offset three quarters of the church’s annual energy use.

The project was made possible by a $102,000 grant from Puget Sound Energy. Overall, more than $954,000 was awarded this year to 13 nonprofits, tribes and other community groups – including Kent UMC – to promote solar energy to organizations that serve low-income, Black or Indigenous and people of color.

Officials and PSE representatives joined community members on Sunday to celebrate the successful installation of the solar panel array.

“We can take those savings and invest right back into the community outside the walls of our church,” Pastor Jim Head-Corliss said during Sunday’s event.

According to PSE, the 40-kilowatt plant, now at Kent UMC, is estimated to produce in excess of 41,000 kilowatt-hours per year.

Shifting away from fossil fuels, which are warming the planet, and toward cleaner forms of energy like solar power is critical as Washington State works to achieve net-zero carbon emissions within the next few decades.

While large, regional energy companies and public utilities like PSE will need to phase out fossil fuels to meet this goal, expanding the use of renewable energy at the community level is also critical and could rather accelerate the clean energy transition.

A recent example of such a shift is the proliferation of community solar systems across the US states — also known as split solar systems or solar gardens — which refers to a project or program in which solar energy flows from one source to multiple customers in a single community .

Community solar systems can help provide clean energy to people whose property, location, or money would make it impossible to install a full solar system on their own.

During the state’s last biennial term, which ended in March, lawmakers passed legislation providing an incentive program to fund the installation of solar panels in certain buildings in low-income communities.

While subsidies and tax incentives can pave the way for equitable access to solar energy, the conversation often begins among neighbors, through word of mouth.

“We are clearly visible from the road,” Kent UMC spokesman Pat Gray said last month as he stood in the church parking lot as the final panels were carried onto the roof for installation.

While the solar power generated by Kent UMC will only be used to power the church, Gray and others hope it will draw attention to community solar and other forms of clean energy.

Installing the equipment needed to harness solar energy can be expensive for homeowners and nearly impossible for renters. While community solar can be much more accessible, the trend is still young. In many cases, demand exceeds supply and eager prospects have no choice but to waitlist, give up, or look elsewhere.

Solar systems at these 13 locations will generate around 514,000 kilowatt hours per year. According to PSE, this would power more than 50 average homes per year.

The utility has awarded more than $3 million to 48 projects over the past five years.