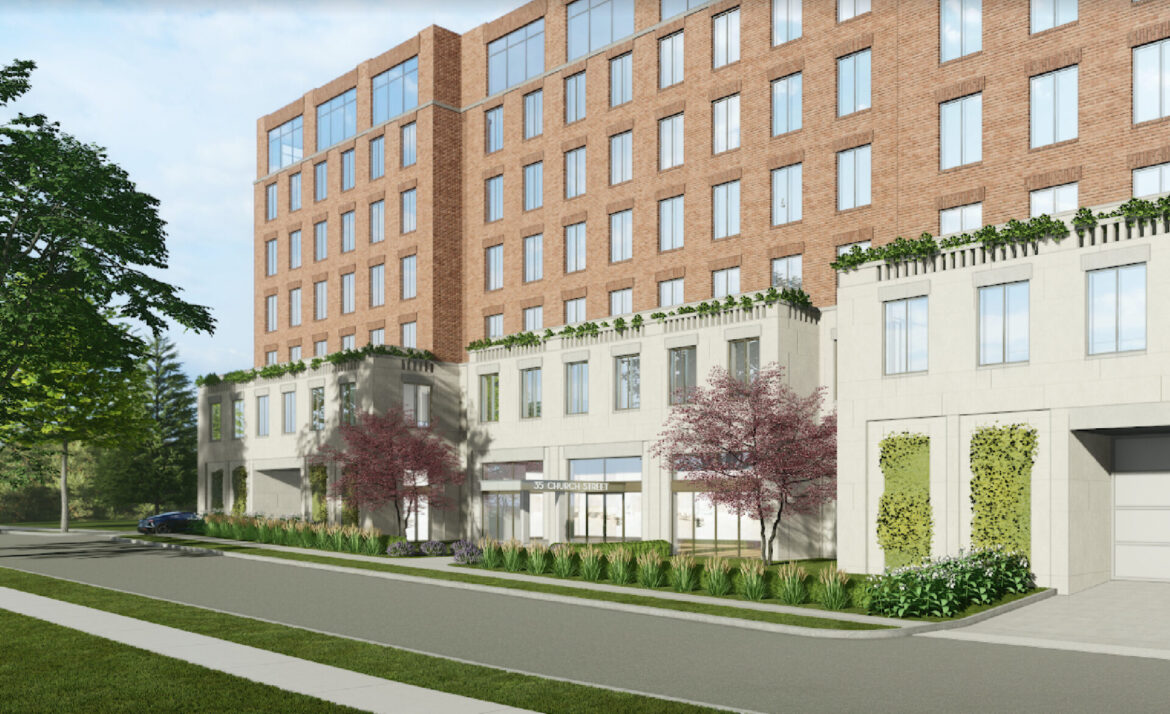 A pre-application for a 192 unit housing development from Church Street to Sherwood in downtown Greenwich was filed with P&Z on Friday.

The proposal is filed under the State Affordable Housing 8-30g Act, which has been on the books since the late 1980s.

In Greenwich, where land values â€‹â€‹are high and land to be developed is scarce, the statute has become increasingly popular.

The statute was created as an incentive for cities to increase their affordable housing stock. Municipalities have a government formula to label 10% of their housing as â€œaffordable,â€ and Greenwich has been around 5% for many years. By the time Greenwich hits 10%, it has to stick to the statutes, about 1200 more units of affordable housing.

Developments per 8-30g are exempt from local zone regulations, with the rare exception of health and safety concerns. Health and safety does not include concerns about traffic, noise, views, or parking.

As requested by 8-30g, the development will describe 30% of the residential units as affordable.

According to a press release from the developer’s PR firm, Antenna Group, the proposed building would include 192 apartments with a mix of one-, two-, and three-bedroom layouts.

It would include a â€œlifestyle amenity spaceâ€ and several green spaces in the open air.

Locals who know Church Street know that it is so narrow that a car has to stop often to wait for an oncoming car. Church Street, and to a lesser extent Sherwood, are used to access Greenwich Hospital and to access the back country and Merritt Parkway on Lake Ave and North Street.

There is limited paid parking on the street.

Across the street is The Nantucket Condominiums, built in 1985.

The public relations firm said the preliminary blueprint for the building was in the very early stages, but a rendering of a building appears to be seven stories.

The townhouse opened just before the pandemic, and its owners recently went outside P&Z to apply for permanent outdoor dining. There are 150 seats in the restaurant, 18 seats in the bar and a banquet room for 104 people on the second floor.

According to the press release, the building is meant to be contextual, with an architectural design that blends in with the neighborhood consisting of a mix of commercial and residential buildings.

This â€œmixtureâ€ was pointed out by the attorney at Greenwich Hospital, who requested the construction of a new 55,000 square foot Smilow Cancer Center in Lake and Lafayette, one block from Church Street.

The hospital wanted to demolish a series of 7 residential and medical offices that they had acquired over the years.

Neighbors stood up during the two-year P&Z hearings to oppose the proposal and attended a workshop on Zoom, arguing the neighborhood was a residential area.

After two-year meetings and a close vote among P&Z commissioners, the Smilow Cancer Center’s proposal was rejected.

The last approved large apartment building, which weighed less than 8-30g, was along Milbank Ave, where a number of turn-of-the-century houses were recently demolished for a 30-unit building.

The application was submitted before P&Z changed regulations to limit real estate in Zone R6 to a maximum of two-family houses. P&Z denied the application despite the applicant indicating that it could resubmit as 8-30g. Eventually the court passed a settlement agreement and the houses were recently demolished.

The only new apartment buildings built in Greenwich in the last 10 years are J-Lofts, which opened in 2016 and comprises 65 units, and The Mill in Glenville, the office space being converted into 59 apartments in what the developer called it “Adaptive Reuse.” The main concern of the P&Z commission for The Mill was that traffic not exceed what would be generated if the offices were fully occupied and, ultimately, be satisfied with the traffic figures.

According to the press release, both J-Lofts and The Mill have been well received, attracting empty nests, young families and young professionals who work in Greenwich but have not had access to adequate rental and affordable housing.

Representatives from Eagle Ventures and SJP Properties are expected to present their preliminary plan for the planned development to the Planning & Zoning Commission this fall.

â€œIf approved, the development would help revitalize the rental market in Greenwich, which currently has no accessible housing options for young professionals and families, as well as empty nests looking for the flexibility of renting to allow them to live in Greenwich to stay close to family and friends. â€œSaid the PR firm in the press release on Friday afternoon. In addition, and upon completion, the development will bring more pedestrian traffic during the day to the many shops and restaurants in downtown Greenwich and also help meet another local demand: providing cheaper accommodation for teachers, first responders and medical staff than those in the local area Community work. “

â€œOur goal is to provide first class residential development in downtown Greenwich. With very few new rentals available to current and future Greenwich residents, this building represents a unique opportunity for the city to meet the demand for quality housing with modern amenities and finishes within walking distance of the city’s shopping and dining district. It will also offer world-class affordable housing that will help Greenwich make significant strides in its government-mandated affordable housing needs. “

Headquartered in New York City, SJP Properties has a 40-year track record as a leading property owner and developer known for creating luxury residential and Class A commercial properties throughout the New York metropolitan area.

According to the press release, Eagle Ventures, founded in 2010 by Greenwich born James P. Cabrera, is a family office with over 25 years of local local commercial and residential property ownership, development and management experience. It described Cabrera as an active member of the local community after serving as chairman of the YMCA and the Greenwich High School Sports Foundation, as well as serving on the boards of several other local nonprofits.

After a 2009 New York Times Article, Cabrera founded Antares Real estate development company in 1996 with Joseph Beninati and invested in redevelopment of the south end of Stamford to develop Harbor Point.

According to a Article from 2009 in the Stamford Advocate, Antares initially specialized in the construction of villas. In 2006, Antares paid $ 223 million to buy Putnam Green, a 466-unit apartment complex, and Weaver’s Hill, which they planned to convert into condominiums before they ran into legal trouble in 2007.

Email inquiries to the Antenna Group for information about the building’s square footage, rental rates, number of parking spaces and the exact buildings that will need to be demolished to make way for development have not been sent at the time of going to press. This article will be updated as this information becomes available.

Note to readers: This is a pre-registration and has yet to be scheduled for a meeting agenda, so the P&Z commission and the city planner cannot answer any questions at this time.

The time for comments or questions is whether and when the application for a public P&Z meeting is planned. The idea of â€‹â€‹a pre-application is to devote about 20 minutes to the topic during a P&Z meeting so that the applicant receives enough feedback to decide whether to pursue an application. javascript: window[â€œ$iceContentâ€]

Per CT Gen Stat Â§ 7-159b (2013) Advance requests are non-binding. They cannot be challenged under any provision of the general statutes and are not binding on the applicant or any authority, commission, department, agency or other official responsible for examining the proposed project.