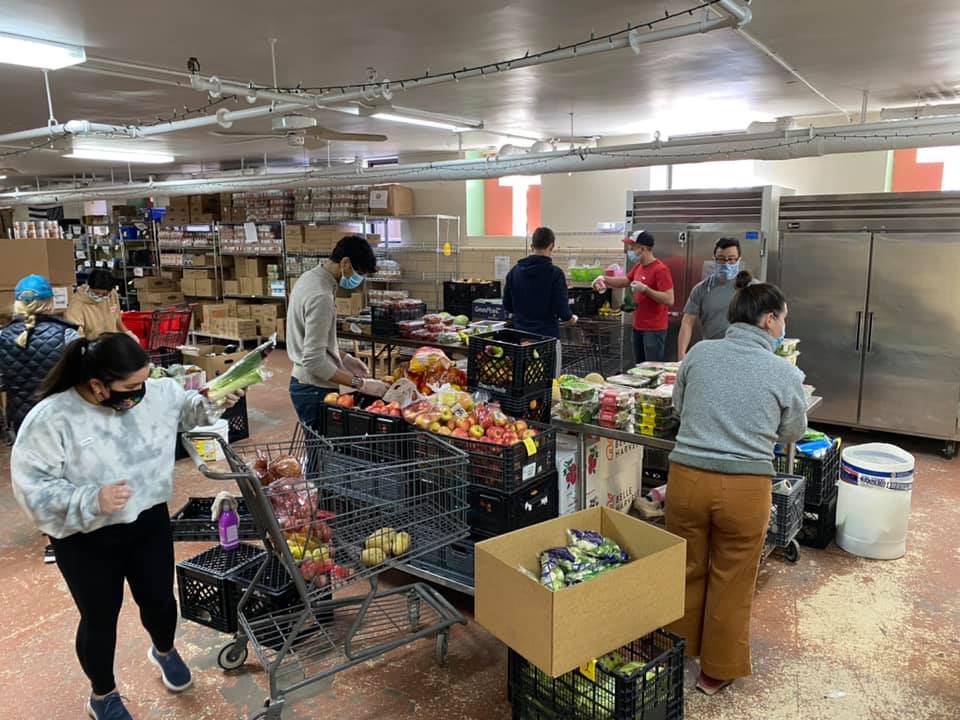 PILSEN — The Pilsen Food Pantry, which has been operating out of a former Catholic church for more than two years, hits a stumbling block when its organizers try to buy part of the church property to house it permanently.

Evelyn Figueroa, founder of the Pilsen Food Pantry and the Figueroa Wu Family Foundation, said she and co-founder Alex Wu made an offer to the Archdiocese of Chicago last summer for part of the former Holy Trinity Croatian compound at 1850 S. Throop St to buy.

In 2020, the archdiocese allowed the pantry to move in for free and use the vacant building and parking lot across the street, Figueroa said. But the two sides couldn’t agree on terms, Figueroa said.

The organizers of the pantry want to buy two plots of land, including the vacant building and an empty yard. Figueroa said she was told by someone in the archdiocese’s real estate department that organizers would have to buy the entire 12-lot package, including the rectory and parking lot. Figueroa said she never received a counter offer and communication between the pantry and archdiocesan officials dried up.

“They just blow our minds and that’s really disappointing,” said Figueroa. “That doesn’t make much sense to me. I thought they would be very happy about that [the interest in buying the building]but instead there was a lot of radio silence.”

The pantry offered the archdiocese $506,000 for the vacant building and courtyard, Figueroa said. It would be funded in part by $200,000 they raised at a fundraiser last year and a matching donation from a private donor, she said.

In a statement, a spokesman for the archdiocese said the pantry’s offer “did not recognize the significant costs incurred by the community on behalf of the pantry, nor have there been meaningful discussions with the pantry about contributing to those costs in of the future.” The spokesman did not say whether the archdiocese would make a counter offer.

“The pantry will be notified when there are more concrete plans and will have an opportunity to discuss their interest further at that time,” the statement said.

Family physicians Figueroa and Wu opened a pantry at the University of Illinois Health Center in Pilsen in 2018, hoping to provide important social services to help fight food insecurity, homelessness and poverty while serving patients.

They moved the pantry to the vacant Holy Trinity Croatian in late March 2020 when COVID-19 and the resulting shutdown hit the city. The school closed in the early 1990sand the church was absorbed by nnear St. Procopius in 2004.

With the move, the organization was able to expand its services to help more residents. Figueroa and Wu have opened a thrift store, medical supply closet and free physical therapy clinic. They have also expanded their literacy project and added a local social worker to help families apply for assistance programs under one roof.

Figueroa said the pantry is serving 320-380 customers a week, up from 160-180 before the pandemic. The pandemic and recent inflation, which has pushed up the cost of groceries and other essentials, has led to a surge in people seeking help with food supplies.

As they try to put down roots on the Throop Street site, Figueroa said the lack of communication, uncertainty about what the Archdiocese plans to do with the building and a recent parking lot incident make them concerned about the future of the pantry .

Employees showed up on Monday and found the parking lot locked, Figueroa said. The pantry van was parked in the locked lot, and it took time to coordinate with other churches in the area to figure out who could unlock it, she said. Employees eventually got in to retrieve the van, but the parking lot was locked again when they left, Figueroa said.

The archdiocese spokesman said the organization was not aware that the parking lot was closed Monday.

Figueroa said she wants the pantry to stay on the east side of Pilsen because location is key to reaching people in the Near West Side, Bridgeport and Armor Square, as well as nearby low-income homes.

Figueroa also said about a third of the pantry’s customers walk, and the site’s parking lot is helpful for people driving from adjacent neighborhoods.

The Roman Catholic Church of St. Adalbert in Plzeň has also been the focus of neighborhood controversy as the Archdiocese attempted to sell the church property to developers who wanted to convert the site into apartments.

St Adalbert’s has been vacant since 2019 but deals to sell the property have consistently fallen through. Its fate is still up in the air as the local city councilor battles to maintain control over how the space in the evolving neighborhood could be used.

Thank you for subscribing to Block Club Chicago, an independent, journalist-run 501(c)(3) newsroom. We make every penny reporting from Chicago’s neighborhoods. click here Support Block Club with a tax-deductible donation.

Listen to It’s All Good: A Block Club Chicago Podcast: