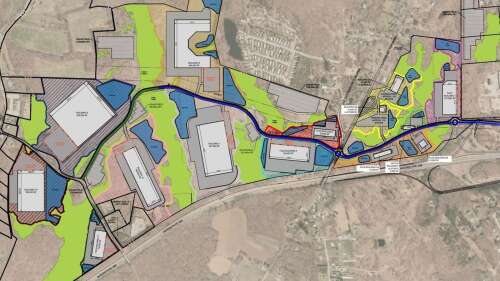 Conceptual layout for a Business Master Plan District for the proposed Business Park North in the Occum section of Norwich. (Image courtesy of Henry Resnikoff of RFP, Inc.)

NORwich — With approval afoot for a proposed $24 million second business park in Occum covering 384 acres, neighbors are rallying against the plan many say would ruin Norwich’s quiet corner .

In Norwich, the City Council acts as a zoning committee, preventing councilors and Mayor Peter Nystrom from discussing the project outside of the public hearing and scrutiny of the zoning committee.

Nystrom, Alderwoman Stacy Gould and Alderman Swaranjit Singh Khalsa are voting members of the NCDC Board and were forced to resign and skip Executive Session discussions at recent meetings as the project neared the approval phase.

The urban planning commission must give the planning approval committee a recommendation on the proposed master plan for the commercial area. The commission will discuss the plan at its November 15 meeting at 7pm at City Hall, but there will be no public hearing at this time.

NCDC has an option to purchase the 17 properties from M&A Holdings LLC and Byron Brook Country Club LLC for $3.55 million. The owners had bought the land, including the former Tarryk and Doolittle farms, in the early 2000s for a golf resort and housing project that failed. The lots are now zoned for a proposed development area or general commercial development.

Meanwhile, NCDC and real estate consultant Henry Resnikoff pushed ahead with planning and permitting. City Council Building Committee approved building regulations for a Business Master Plan District in April 2021. At the December 5 meeting, the specific plan for the property will be reviewed.

The plan is to reconstruct exit 18 of Interstate 395 off Route 97 to create a designated main entrance into the commercial area. A roundabout is proposed at the junction of the new road and the Canterbury Turnpike to keep traffic off the country road in the business park.

There are 148 contiguous property owners on the 17 business park parcels at the Canterbury Turnpike, Scotland Road, Lawler Lane and Route 97 in Occum.

Dozens of local residents have spoken out against the project on Facebook forums and gathered local residents to attend public meetings. Opponents are promising to circulate petitions to bring a project to the city council that some say would ruin the rural character of the city’s “quiet corner” and disrupt wildlife habitat.

Opponents questioned the need for a second business park, citing vacant commercial and industrial buildings in the current Stanley Israelite Norwich Business Park and elsewhere in the city. Others questioned the promises of a wealth tax windfall if the city grants lavish tax breaks “just to have the business pack up and leave” once the tax breaks end, one commenter wrote.

Samuel Browning, a local barrister and former councilman, is a resident of Scotland Road. “I’m probably in the minority as I don’t disagree,” Browning said. But he has questions and concerns, especially about access and traffic.

“I hope they get the freeway ramp up,” Browning said. “If they don’t get the approach right from day one, it will screw up. it will strengthen the opposition.”

Browning also said the city’s first business park is almost full because the city is allowing condominiums and apartment complexes. “They converted large parts of it into condominiums.”

Norwich Worship Center Pastor Jeff Sharp said he was approached by a neighbor who asked the church to host the neighborhood meeting. The church seats about 200 people and could set up a crowded video viewing room on the ground floor if needed.

Sharp said the community, which has about 120 to 130 active members, hasn’t spoken much about the business park. The church itself sold back land to the former golf course project in 2007. Sharp said the church uses its large lawn, which would overlook the development, for barbecues and youth activities.

“We’ve known for a number of years that something was going to be built around us,” Sharp said.

NCDC President Brown said project officials will make a presentation and answer questions in an informal setting on Wednesday. They will discuss the impact on residents, buffer zones and a proposed public bike and walking path.

Brown said officials would reassure residents that no construction work is imminent. The project requires local, state and federal approvals, including approval from the Office of the State Department of Transportation for the access road. NCDC will again apply for federal funding in the spring.

Brown said he understands concerns about traffic on residential streets and said the proposed access roads would come first.

“We wouldn’t put the cart before the horse,” Brown said. “Yes, we understand the concern about the traffic pattern.”

Upcoming public meetings on the proposed Business Park North in the Occum area of ​​Norwich:

Just before the midterms, the clergy preach politics and civics classes