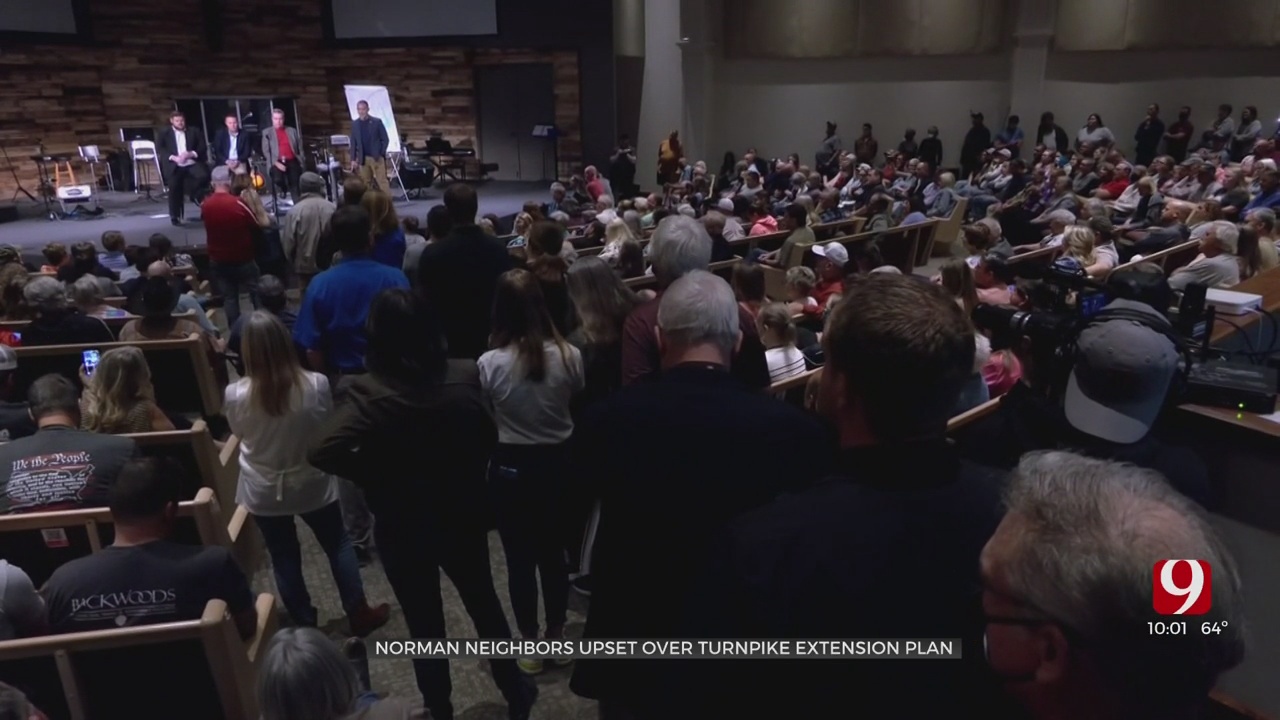 A crowd of more than 400 Norman residents crowded into CrossPointe Church Thursday night for a town hall hearing about the proposed expansion of the state highway system.

Two routes of the ACCESS Oklahoma plan would pass through Cleveland County. Norman Ward 5 Councilman Rarchar Tortorello said the freeways could force hundreds of property owners to sell their land to the state.

He said last week’s announcement of the plan took residents and the city council by surprise as well.

“For us it was a punch in the pit of the stomach,” said Tortorello. “This is a horrific event happening to the citizens of Ward 5, particularly those who are losing their homes.”

Three engineers from Poe & Associates, the firm contracted for the project, presented the plans to many in the crowd who jeered and shouted resistance.

“My property, is it worth the extra 25 minutes?” shouted a man.

“This is just the beginning of our hell,” one woman told engineers during the question-and-answer session.

No member of the Oklahoma Turnpike Authority was present at City Hall. At the start of the event, Tortorello said his plan to attend had been cancelled.

Gov. Kevin Stitt announced the plan last week at an Oklahoma Turnpike Authority commission. The $5 billion project is expected to span 15 years and is still in the early design stages.

According to the engineers, the freeways will be responsible for the expected growth in Cleveland and McClain counties, particularly Norman and Purcell.

A spokesman for OTA said the agency has not yet determined how many private properties will be affected by the construction because the designs are ongoing.

Tortorello said he sees no benefit for Norman in the new motorways and hopes plans may change to some extent.

“There are very few on-off ramps and access points on this section of the turnpike. So many citizens feel there is no economic value in having it where it is,” Tortorello said.

The OTA released the following statement to News 9 and said it encourages anyone with questions or concerns to contact the agency.

Thursday night’s town hall meeting in Norman provided representatives from the Oklahoma Turnpike Authority with an opportunity to speak directly with citizens concerned about the impact of the ACCESS Oklahoma alignments. The value of a long-term plan like ACCESS Oklahoma is that, in many cases, it buys OTA time to work more transparently, thoroughly, and thoughtfully with affected property owners and to better address technical and environmental concerns. OTA presented the overall plan to the agency’s commissioners and the governor late last month. Over the next few months, OTA will be hiring design engineers to refine the alignments and connections shown on interactive maps presented at the meeting and now available on the ACCESS Oklahoma website. Until this refinement occurs, OTA has limited detailed information to share with property owners and homeowners. As explained during the town hall meeting, OTA, in cooperation with the Oklahoma Department of Transportation, selected routes and connections to existing infrastructure that have the least impact on homeowners, business owners and the environment. OTA promises to continue open dialogue with property owners throughout the process by holding several public meetings in the coming months. Property owners and homeowners are encouraged to visit the ACCESS Oklahoma website (accessoklahoma.com), call 1-844-56-ACCES(S) or email [email protected] for more information. OTA representatives will respond to all inquiries. The website will provide up-to-date information throughout the long-term project.