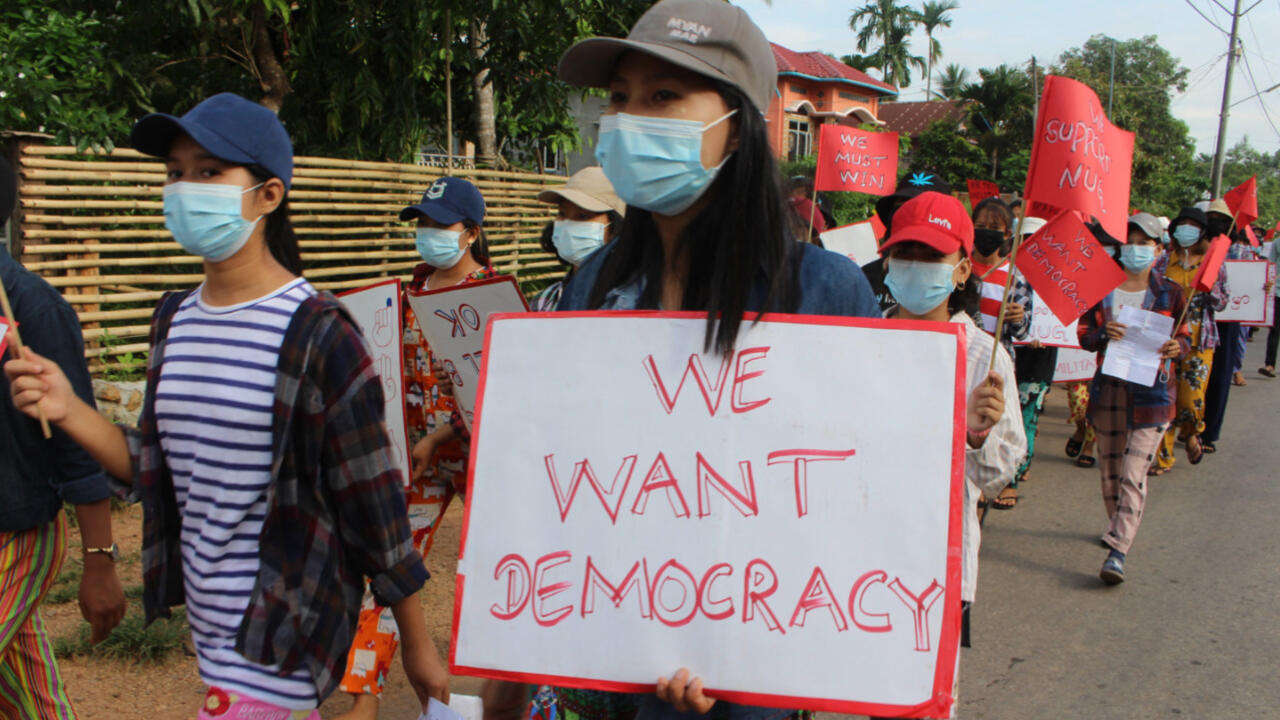 Protesters against military rule marched in Myanmar on Saturday, three months after a coup ended the democratic transition, with several small explosions that rocked the commercial capital of Yangon.

The country has been in turmoil since the military overthrew the civilian leader Aung San Suu Kyi on February 1st, what an abrupt end of Myanmar‘s short-lived experiment with democracy.

The seizure of power sparked a massive uprising, which the authorities tried to suppress with deadly force and live ammunition.

As Myanmar entered the fourth month of military rule on Saturday, protesters held lightning demonstrations and quickly marched through the streets to avoid confrontations with police and soldiers in the Yangon commercial center, an epicenter of unrest with a strong security presence.

The rapid pace of the protests “so that people have time to leave when the security forces arrive, otherwise they would die or be arrested,” said student activist Min Han Htet.

A bomb explosion went off near a local school around 10 a.m. in Insein Township, Yangon, said a resident who was nearby.

“Some security guards came to check the explosion area, but I only watched from a distance from my house because I was afraid they would arrest me,” he told AFP.

In the afternoon, two more explosions occurred in Yankin, further south, according to residents of the leafy community.

“I thought it was thunder,” a local resident told AFP, adding that the explosions made security forces nervous.

The state evening news reported that a woman had been injured in the Yankin explosions and that “instigators” had been blamed.

No one has yet held responsibility for the increasingly frequent bomb attacks in Yangon.

“You made people live in fear”

The former capital has changed completely since the junta came to power on February 1, with barricades at major protest hotspots, security forces on patrol and residents reporting nightly arrests of suspected dissidents.

“They (the junta) made people live in fear, and it’s good to make them nervous,” said the resident of Yankin.

He also praised the Flash protesters for their ingenuity in evading arrests and raids.

“Any defiance without being captured or killed is great for the resistance.”

Across the country, almost 760 civilians were killed in the anti-coup riots, according to a local surveillance group, although the junta recorded far fewer deaths.

But the democracy movement will not be deterred. Protesters gathered on Saturday in downtown Monywa – a hotspot for violence – and carried signs that read “Monywa cannot be governed”.

Wanted letters from the junta leader, Senior General Min Aung Hlaing, describing him as a “power addict” were posted all over the city.

He has repeatedly justified the coup as necessary to protect democracy, claiming that Suu Kyi’s party won a landslide victory in the November elections.

UN calls for a return to democracy

The UN Security Council on Friday again called for the restoration of democracy in Myanmar and the release of all prisoners, including Suu Kyi, and strongly supported the demands of Southeast Asian states for an immediate cessation of violence and talks as a first step towards a solution after the military coup.

The council’s press release was followed by a briefing from the chief UN envoy that the strong, united demand of the people of Myanmar, who have protested since the coup, for military leaders to face “unexpected difficulties” in consolidating power and risks to the nation’s government Standstill.

Christine Schraner Burgener said in a comment at the closed council meeting the Associated Press received that her discussions in the region “heightened” her concern that the situation in Myanmar is deteriorating in all areas.

She pointed to a resurgence of fighting in ethnic areas, more poor people losing their jobs, officials refusing to work to protest the coup, and a brewing crisis of families in and around the capital, Yangon “marginalized” due to food and trying to survive.

The incessant violence against demonstrators has drawn the ire of some of Myanmar’s myriad ethnic armies, many of which have been fighting the military in border regions for decades.

Several have condemned the military and supported the anti-junta movement by providing shelter to fleeing activists in the area they control.

The clashes between the military and the Karen National Union (KNU), one of the leading rebel groups, have escalated since the coup.

The KNU has seized and razed military posts, and the junta responded with repeated air strikes in the rebel heartland in Karen state, the last one on Saturday shortly after midnight.

The target area is right next to Thailand’s northern province of Mae Hong Son, and displaced people have fled across the Salween River, which marks the border.

He added that more than 2,300 Myanmar citizens have entered Thailand.

The media and local Karen aid groups have been blocked from accessing the refugees, with authorities citing the spread of Covid-19 as the reason – they stopped to check the temperatures of returning home residents.

Violence has also broken out in Myanmar’s northern state of Kachin between the Kachin Independence Army and the military, which launched air strikes in Momauk community on Friday.

Two small towns were hit by new artillery fire on Saturday, according to a humanitarian worker who said residents were afraid the fighting would get closer.

The pros and cons of debt consolidation | Personal finance