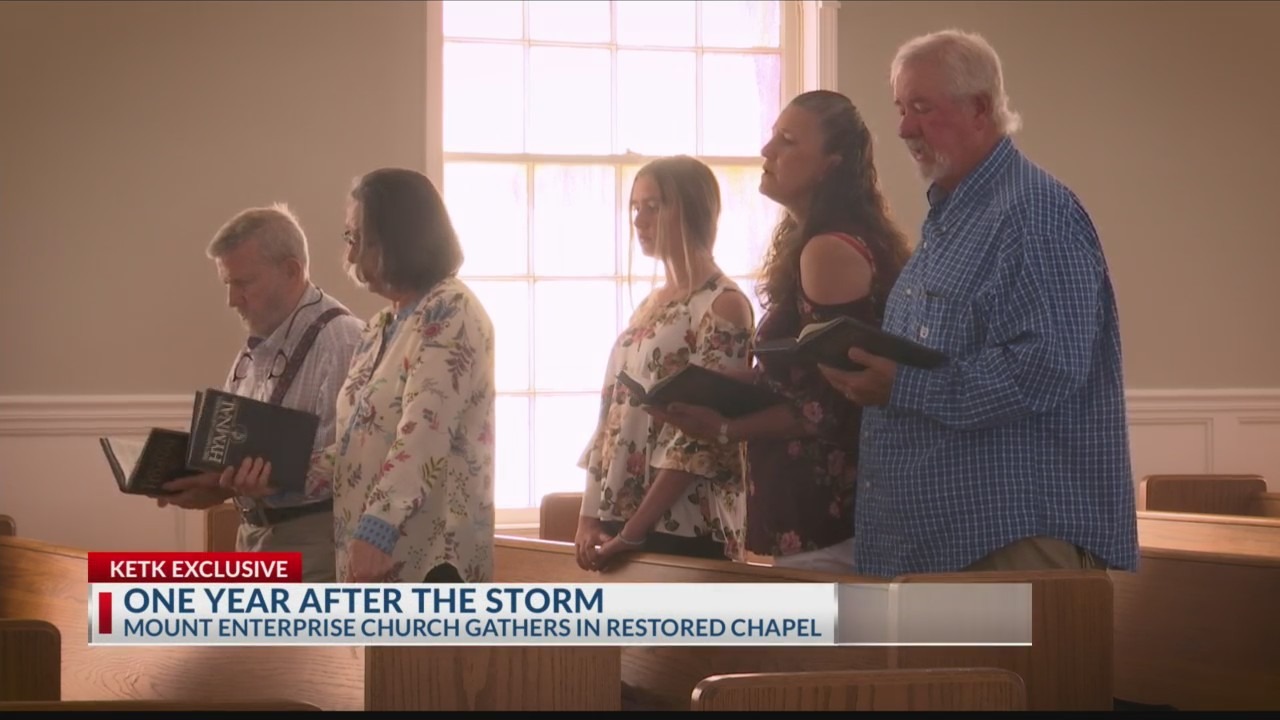 MOUNT ENTERPRISE, Texas (KETK) — A church in Mount Enterprise offered services in its restored chapel for the first time after a tornado destroyed its building. The tragedy happened on Sunday the 27th, exactly one year ago. Meanwhile, the city is still recovering from last week’s EF2.

When tornadoes swept through several east Texas counties, the church was one of the buildings on their way.

Part of the roof collapsed and flew away, and a hanging church bell fell to the ground.

“It’s a sound I can’t really describe to you,” said Billy Bledsoe, a former minister of the First United Methodist Church. “It was very loud, very sobering.”

During the tornado, churchgoers held a Passover service in a building next door. According to community members, the storm literally swept over them.

“We know the Lord spared us and passed over us with this storm,” Bledsoe said.

In the middle of the service, the sound of the destruction outside led them into a closet, where they held tight and prayed.

According to parishioner Dottie Seligman, this was nothing short of a miracle.

“The Lord knew, He knew He would protect us, He needed us here and we need Him,” Seligman said.

Although parts of the church are badly damaged, Bledsoe pinned his hopes on the restoration.

“The resurrection can come out of it, we can be stronger. Our differences are actually our strengths when we are united and doing this together,” Bledsoe said.

Among the extensive exterior damage was a cross outside, virtually untouched. Parishioners say it’s a sign of hope amid a storm.

“Rebuilding will take time, but everyone is strong and coming together,” said parishioner Gracielita Esparza. “We will overcome.”

Flash forward 365 days later, church members have gathered in their newly renovated, restored chapel building to offer their first service at their main sanctuary since the tornado passed.

For Jeania White, First United Methodist Church in Mount Enterprise, it is a special place for her. In the 1950s, her grandparents helped build the beloved staple. After last year’s storm destroyed her hard work, White was forced to rebuild her 46-year-old home.

“With the help of our contractors, we were able to have just about anything repaired or refurbished.”

For the first time since that awful day, White and other church members are celebrating patience, restoration, and what they call a modern day miracle. “It’s the first day back and we’re hoping to fill it as we move forward, we’re hoping everyone will come back to us,” said Randy Case, a trustee of First United Methodist Church.

Overwhelmed with gratitude and joy, Case wanted to thank you, his East Texas church, for your generosity during difficult times.