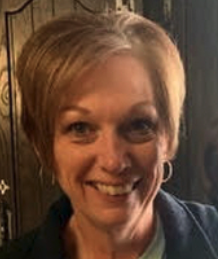 She grew up with her 6 siblings on a farm outside of Wilsonville, Nebraska spending most of her time outdoors riding horses, seducing her sister Susan with cats, helping her mother and sisters raise chickens, and especially playing with the animals the German shepherd puppies that their mother would raise. She avoided chores as much as possible. In the summer, it was her and her younger brother Kyle’s job to fetch the dairy cows from the pasture every afternoon and bring them back across the creek to the pasture the next morning. She had many fond memories of growing up on the farm and had often said that she wished her children had been so lucky.

She attended the K-7. Class in Wilsonville and was baptized in the Christian Church of Wilsonville before transferring her membership to the United Methodist Church in Oberlin, where her family moved in 1976. Her faith was very important to her and gave her great comfort during the years dealing with kidney cancer. She competed in all sports and especially loved the shot put and discus on the track, where she held Decatur Community High School records for many years and earned two state medals before graduating from DCHS in 1981.

On February 21, 1982, Jody married the love of her life and high school sweetheart Kenny Black. They lived out their married life in Oberlin and were blessed with two amazing children, Chelsey and Jobey. Holidays were very important to her and she planned a family trip every summer. She and Kenny also spent weekends in their trailer at Red Willow Lake just north of McCook and have hosted many relatives and friends over the years, but the best memories are shared with their children and particularly their grandchildren Paisley, Taydem, Kreightyn and Nashlynn. They’ve had many fun weekends fishing, boating, skiing, tubing, walking, and making s’mores.

Jody and Kenny loved fishing, and their vacations away from the kids usually included a fishing trip in places like San Francisco Bay, the Pacific Ocean, and on Oregon’s Columbia River, where they caught giant sturgeons. Jody loved to travel and persuaded Kenny to go to the West Coast several times to her favorite destination, the Oregon Coast, and had also traveled to the East Coast to visit Cape Cod, New York City, Boston and Canada, accompanied by her Sister Char Who often traveled with them. She often invited her younger sister Sandi or one of her nieces to accompany her on vacation.

Kenny and Jody bred Labrador Retrievers for many years and she loved spending weekends at HRC Hunt Tests and was particularly proud when Kenny won his first championship. Paisley and Taydem went with them and decided they could do what grandpa did, needless to say she was a very proud grandma when they both earned their started titles for their puppies.

Jody had a career in banking that spanned 40 years. Beginning her senior year of high school, she began as a teller/accountant and later a consumer loan clerk for Farmers National Bank in Oberlin, where she worked through sales. She and colleague/friend Mick Glaze successfully convinced Atwood banker Barney Horton to set up a branch of Farmer Bank & Trust in Oberlin, which she ran as Branch Manager and COO for 18 years before deciding she needed a new challenge and started as a Residential Real-Estate Lender at MNB Bank in McCook, where she was working at the time of her death. She cherished the friendships she had made while working at these institutions and has remained close to many colleagues over the years. Jody loved decorating and arranging flowers and loved sharing her talent with others, especially her family and friends. She was a very reclusive person and her longtime best friend Jane Gilliam finally gave up after many unsuccessful attempts to get her to join social clubs.

She was preceded in death by her parents, Neal and Norma Elwood, grandparents, Henry and Grace Michals, Tom and Florence Elwood, and brother-in-law Lyle Springer, father-in-law Lyman Black.

Funeral services will be held at 10:00 am on June 23, 2022 at the United Methodist Church of Oberlin. The viewing will take place at Paul’s Funeral Home on 22 June 2022 from 1pm to 7pm, with the family welcoming guests from 5pm to 7pm. Burial will take place in Oberlin Cemetery. Memorial donations can be made to the United Methodist Church of Oberlin. Condolences can be left at www.paulsfh.com.