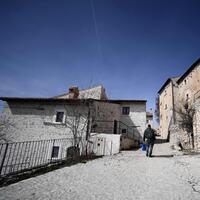 Italy raises battlements to save its dying hamlets

The streets are silent and cats hunt in abandoned houses, but the view from the battlements of Calascio Castle is spectacular; maybe good enough to save this dying Italian hamlet.

Local officials have put restoring the ruins and attracting tourists at the heart of their bid to revitalize the village, which has received 20 million euros ($22 million) in EU funding for the post-pandemic era.

Surrounded by the snow-capped peaks of Abruzzo, Calascio is one of 21 dying or abandoned villages that the Italian government has awarded an equal share of a €420 million pot.

Critics question how equipped the tiny communities are to spend such vast sums, which in Calascio amount to almost 154,000 euros per person.

The nationwide project has soured relations between victorious and losing villages in several regions, prompting warnings of potential fraud and waste.

But Calascio’s mayor Paolo Baldi, a former mountain guide from Rome, is not discouraged.

“We want to bring the hamlet back to life,” says Baldi, who renovated one of his dilapidated houses in 1993 and moved in with his young family.

Once a busy and prosperous wool center, Calascio shrank from over 2,000 inhabitants at the beginning of the 20th century to just 130 today, almost all older. Only about 70 people remain in the winter months.

Only three children were born here in 12 years. It has no grocery stores, school, or doctor’s office.

What the hamlet has is Rocca Calascio, an ancient castle that attracts 100,000 tourists a year.

Baldi plans to spend a large chunk of the funds – just over €4.6 million – to restore part of the ruins damaged in a deadly earthquake in 2009.

It is hoped that archaeological digs will determine when the castle, originally a watchtower, was built and will reveal more about a neighboring church and graveyard where bones come to the surface after storms.

Some funding is also going towards creating jobs and attracting more tourists, with just under €7.5m earmarked for a ‘scattered’ hotel in the village’s empty houses and almost €1m for a museum.

Locals are hoping young families will move to the area and maybe open their own businesses.

“Do you know what was the biggest event in Calascio this year? It was the birth of a baby,” tobacconist Walter Zara told AFP.

Italy is the biggest beneficiary of the EU’s €800 billion plan to strengthen the bloc post-pandemic, and has committed nearly €200 billion in grants and loans.

Funding for Calascio is part of a program to boost tourism in undervalued areas, particularly in the poorer south, and ease pressure on hotspots like Venice.

Villages across Italy took part, with winners including Pietrabbondante in Molise, which has a 6th-century amphitheater.

“Italy’s true wealth today lies precisely in these small centers,” says Mayor Baldi, adding that countless mountain villages across the country are in a state of serious decline but could be “a driving force for the economy”.

A sheep breeding school is part of this driving force. The plan is to teach the youngsters the ancient art of pastoralism, where shepherds and their flocks spend the warmer months wandering.

Funds will also flow into increasing cheese production. The region’s pride is Marcetto, a traditional sheep’s cheese made with live maggots that soften it with their digestive acids.

It was a staple for shepherds, who used to gather with their flocks in front of the 16th-century church of Santa Maria della Pieta, which towers right on the castle’s crest.

Bleating cattle made it possible to follow the mass in the so-called “shepherd’s church” through a small side window.

Fermented cheese and religion might not be enough. Domenico Ciccone, 78, who began shepherding when he was just 10, said he wasn’t convinced the job would attract many young people.

Ciccone’s son and wife help with the milking, but without a new generation of herdsmen to help him in the coming summer, he has been forced to sell much of his flock.

“It’s a tough job, you have to like it. There’s no time off for a party or a Sunday [or] when it storms.”

He also wonders if training new shepherds will help reverse the population decline, quipping that “a 20-year-old who tends sheep all day isn’t going to have any luck with women!”