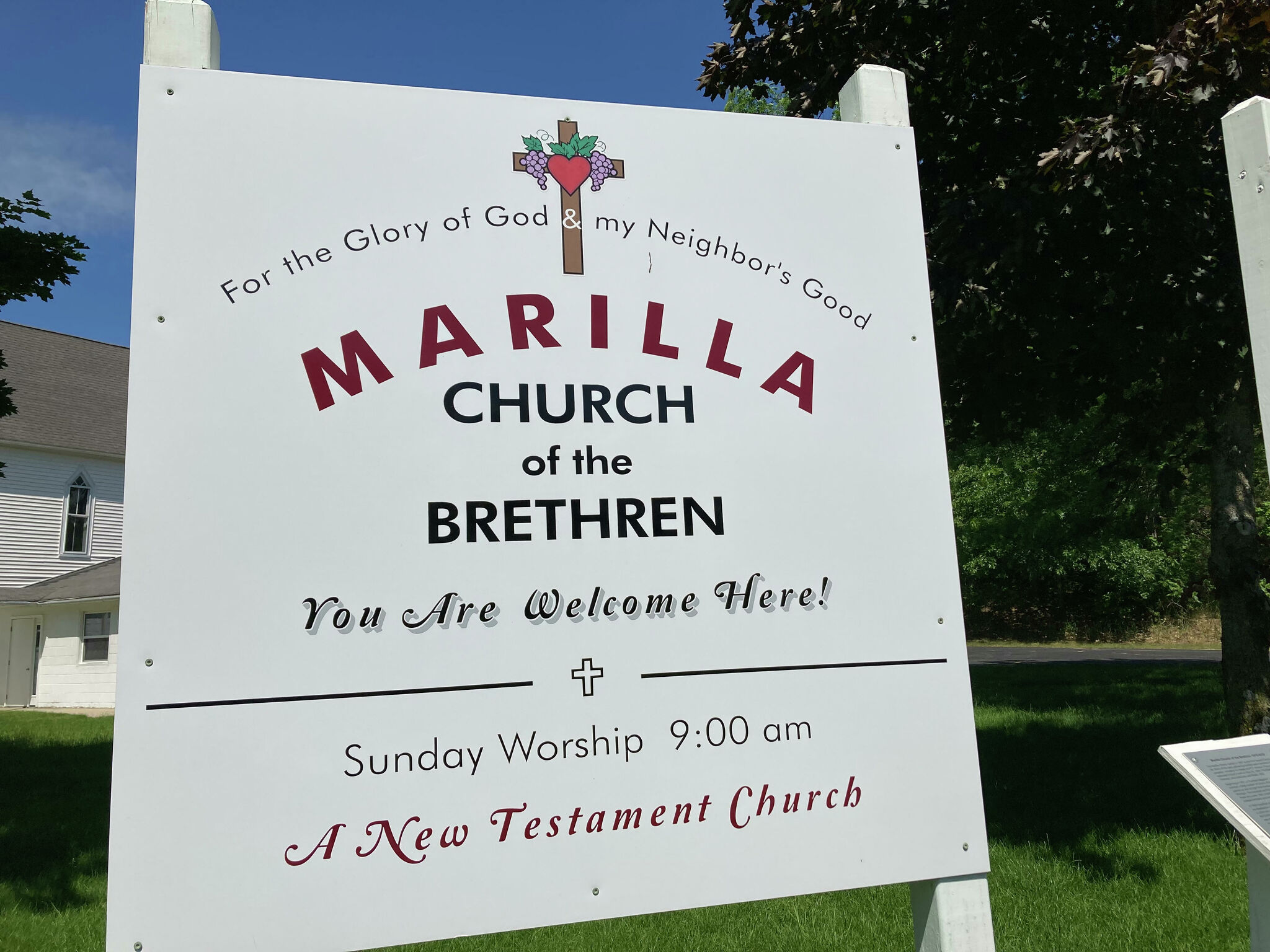 How Marilla Township, Church of the Brethren, came into being

In a publication entitled “History of Manistee County,” the Marilla township was described thus: “Until the month of June 1860, the area now in the Marilla township was a dense forest of maple, beech, hemlock, and pine, and only inhabited by birds and animals. At that time a man named C. Churchill, who had left the Empire State with his family to find a home in the New West, came here and was pleased with the appearance of the country. There were numerous springs and streams, and the soil promised fertile crops. He built a log cabin and made a home for himself in the dense solitude of the forest.”


Other brave souls soon followed and they began making decisions about what it took to create a good place to make a living, raise a family and make a difference where they lived.

Where would the children be taught? Who would teach her? How can we carve roads that will help us travel? Where can we worship? Where can we market what we grow? Where is the nearest place to get supplies?

There were many questions, and people addressed the issues by forming a government that would help get things started. People were risk-takers, persevering, and equipped to deal with adversity and deprivation in order to build their community.

By 1878, according to the History of Manistee County, “as the number of settlers increased, various school districts were formed and comfortable buildings erected. Two of the school buildings are particularly beautiful, costing around $1,000 each. The city has a well-stocked public library, which speaks well for the enterprise and intelligence of the people. Near the central part of the city there is a very beautiful cemetery, well fenced and nicely decorated with trees. The church societies are one congregation and Baptists. The former was organized in 1872, the latter in 1876.”

In 1874, 188 people lived in Marilla. Farmers grew wheat, corn, various grains, potatoes, hay, and also produced wool, butter, and maple sugar for trade, marketing, and family needs. Imagine you are on the ground floor about to start a community. It took many people and some strong leaders to make this happen.

Marilla Church of the Brethren

One of the churches that was an integral part of this community was the Baptist Church, founded in 1876. In 1896 the community undertook the ambitious project of building a church.

According to an early pioneer named Rueben Nichols in a letter to Galen Barkdoll, pastor of the Church of the Brethren, in November 1943: “In the spring of 1896 I began a subscription to the building of a church with my name on the top for $10.00 . FP Winter signed $10.00 and his mother $5.00. In a few days it had grown to over $1,000.00. Then George Patterson assigned the lot. A building committee was then elected: Rueben Nichols, HW Studley and Irving Clark. Mr Studley, refusing to act, told Mr Clark, “Go ahead, it’s fine with me.” From that point on I had full responsibility and the advice and help of George Brimmer. It was built in the first winter. We had a “bee” cut the logs and shipped them to the mill and had them cut for all the raw wood. Ladies Aid gave the windows and about $10.00 to go with it. Rev. George Crook went to Manistee and asked some businessmen for a little over $1,000. Then pledges were made at the inauguration for less than $15.00, making it free and clear. This is where Josiah Cook’s name, Free Methodist, was a wonderful help as a carpenter and deserves credit in his work.”

As a boy, Henry Studley drove teams of horses to haul wood to church grounds. He tells the following:

“On the improved roads of that time, planks were laid to help, and loads went uphill. On the descent, the driver took the loose sand as it helped slow down the loaded teams, which acted as a brake. John Smyth (Henry’s uncle), who drove a timber team, regretted that his team had to haul their load up the planks and then haul the load downhill in the sand. So he took a ride downhill on the planks. The fast-moving load was more than the horses could handle, and he narrowly avoided a collision. On the next hill, still on the planks to save his team, he tried to hand the load of wood down the planks, the unwieldy wagon rolled over him and got stuck in the loose sand. Unharmed, John Smyth brushed the sand out of his hair and said, ‘I wouldn’t own a car that ran that well.’”

Now to the brotherhood. The following is taken from the minutes of the Baptist congregation of December 11, 1912:

“The old clerk, Geo. Brimmer and brother. Edward Williams was elected chairman of the meeting. After Bro’s prayer. Crook, the meeting got down to business. Present Edward Williams, John Holly, Glen Clark, Rueben Nichols, LF Hall and WF Hall. Also Rev. RA Shaw and (Rev.) George Crook. Move and support that we elect three trustees, one for one year, one for two years and one for three years. Carried. Rueben Nichols was elected for 3 years, George Brimmer for 2 years and Welcome Hall for 1 year. Moves and supports the sale of Church property by the trustees to the best of their ability. Carried.”

In the early 1900’s many fraternal families were lured from Indiana to far north Michigan by real estate agents promising good farmland.

Available farmland in Indiana was limited, and since the brothers typically had large families, there was not enough farmland to support the growing population. So they packed up their belongings and families, hired railroad cars, and took the train to what is now Brethren, Michigan.

They encountered a grim situation. The land they bought unseen was unproductive. Among those who were part of this migration of brothers were the family of Hezekiah and Rachel Grossnickle.

Hezekiah and Rachel’s grandchildren learned from their parents that Rachel and her daughter Grace were in the barn milking the cow and crying over their dire situation when Rachel cried out, “Why did Hezzie bring us to this godforsaken land?”

However, despite the difficulties, the brothers persevered and found ways to survive and earn a living. Hezekiah and Rachel tried a different route and traveled further east and north of Brethren to Marilla Township and found an already established community and suitable land.

The brothers and other assimilated parishioners thrived at their place of worship, and their descendants continue to come to “meet” what the brothers long ago called this historic site.

Over these many years, the Marilla Church of the Brethren has greatly impacted Marilla Township by focusing on service to others and reaching out to all in community.

Money “enables the mind to do its work”