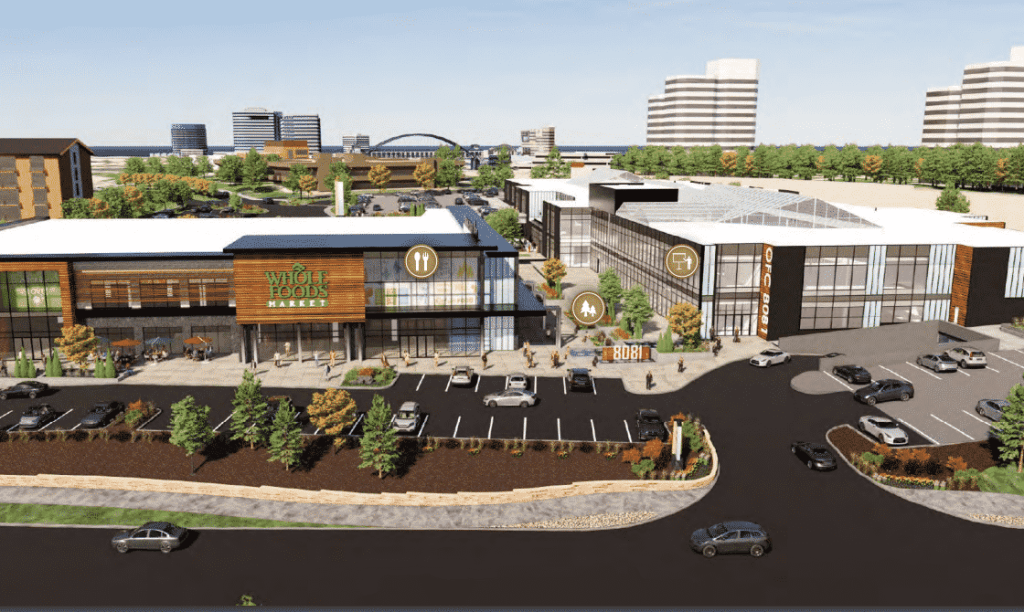 A former church in Greenwood Village may be destined for a different form of conversion.

The property, adjacent to Interstate 25, features a sprawling 249,000-square-foot building surrounded by a two-story parking deck. According to a project document, it was built in 1984 as a regional anchor-less indoor shopping mall and, after a 1995 remodeling, was used by a religious ministry.

According to the plans, Alberta will repurpose portions of the existing structure to create 160,000 square feet of office space. The company also plans to construct a new 40,000-square-foot building on the west side of the lot the company has earmarked for a grocery store.

Marketing materials for the project are available online, and feature renderings show Whole Foods as the grocer. Don Provost, a founding director of Alberta, told BusinessDen the company is in talks with the company; According to Whole Foods, the store is under development.

Another rendering on LoopNet shows a grocery concourse atop the grocery store building.

“We look forward to working with the city to advance this development,” Provost said.

In 2016, Alberta — based in Greenwood Village — proposed a much larger, 24-acre, transit-oriented development in the area called “Orchard Station,” which included property 8081 Orchard and several other lots.

But the company withdrew those plans weeks later, largely due to opposition from local residents, said David French, a city planner.

Alberta resubmitted plans for the 8081 E. Orchard site in 2020, but has not proceeded with them. The 2020 plan is similar to what’s being proposed now, French said, but the current plans aren’t a continuation of that proposal.

According to public records, Alberta paid $14.8 million when it bought 8081 E. Orchard Road from Marylin Hickey Ministries in 2017.

Rev. Reese Bowling of the Orchard Road Christian Center, which formerly operated in the building and is now located at Encounter Church in Centennial, said the building has been used primarily for police SWAT training since the church left.

Bowling said the church board decided to relocate because the Greenwood Village location no longer met its needs.

“This was our location for 27 years and the board was actively looking for a relocation or a local partnership and that wasn’t realistic,” Bowling said.

French said a development of this magnitude will take staff about four or five months to review, and there will be several changes during that time.

“We could consider a city council hearing anytime between June and the end of the year,” French said.

Alberta also developed the Streets at SouthGlenn and the Promenade at Castle Rock, among other properties in Colorado.