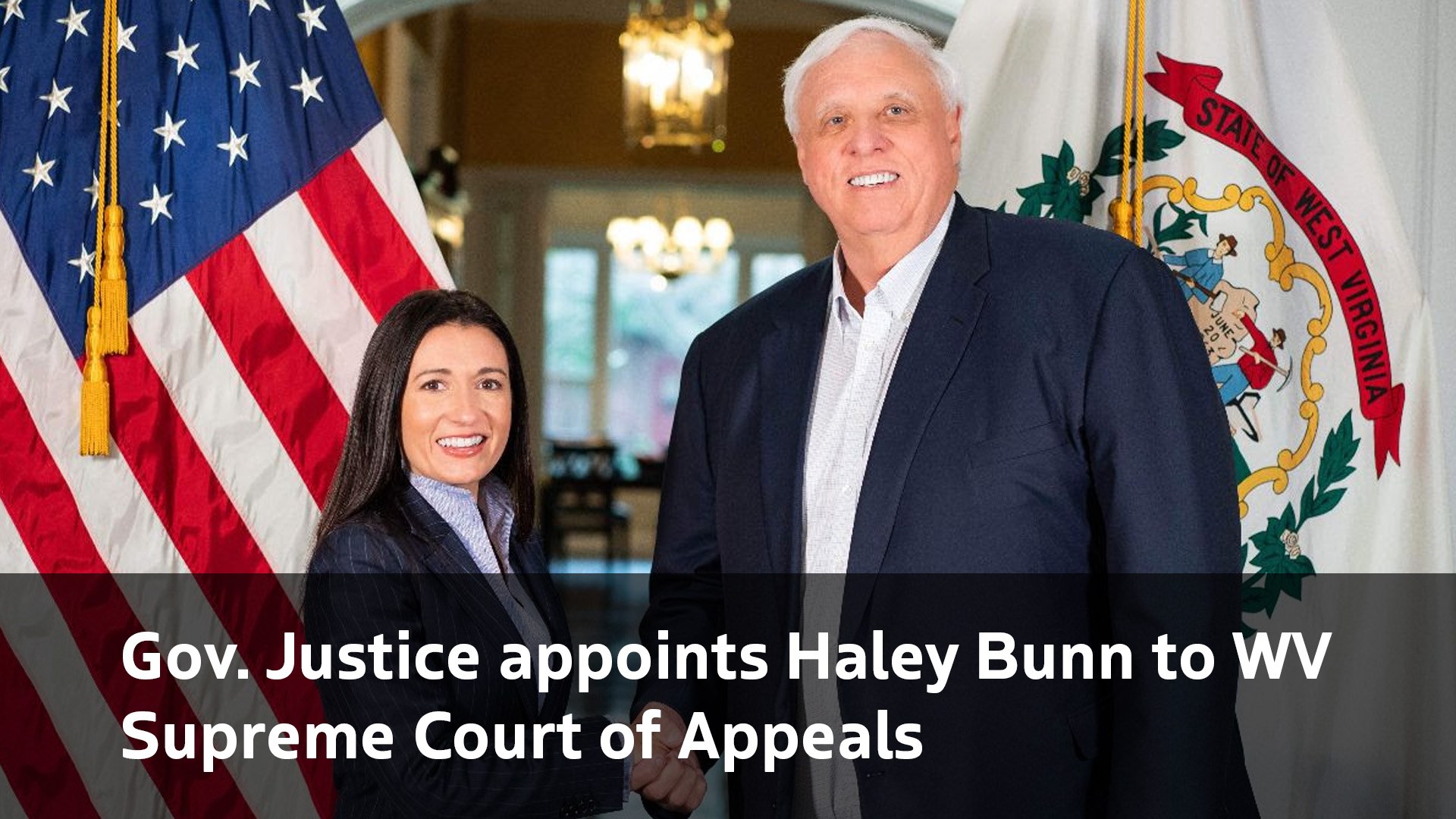 
CHARLESTON, WV – Governor Jim Justice announced today that he has appointed C. Haley Bunn, a native of Oceana, Wyoming County, to the West Virginia Supreme Court of Appeals. Bunn is a descendant of generations of West Virginia coal miners and a former federal prosecutor with extensive trial and appellate experience that she will bring to the state’s highest court.

“Haley Bunn is a beautiful story from West Virginia,” said Governor Justice. “She is the daughter of a miner and a daughter from southern West Virginia who has dedicated her life to serving her state and community. A native of Wyoming County, where the opioid epidemic has hit as hard as anywhere in America, she has chosen to devote much of her career to fighting the epidemic. Haley is also a seasoned court veteran whose experience as an elite trial attorney will be invaluable to our Supreme Court of Appeals.”

Bunn is a lifelong West Virginian and an honors graduate of West Virginia University and West Virginia University College of Law. She began her legal career in private practice at Steptoe & Johnson PLLC before serving as a federal prosecutor for seven years. During her federal service, she prosecuted a series of public corruption cases in Mingo County that drew national attention and resulted in the conviction of four elected officials.

Bunn’s primary focus as a prosecutor, however, was the drug epidemic in southern West Virginia, specifically illicit opioids. In 2017, the United States Department of Justice selected her as one of 12 state attorneys in the country to work in a newly created opioid fraud and abuse detection unit, where she took a leading role in addressing the state’s opioid crisis. Bunn prosecuted numerous major drug cases, including that of a group of methamphetamine dealers whose combined prison sentences totaled more than 90 years; a Wyoming County doctor who prescribed opioids to patients without examining them; a Charleston neurologist sentenced to more than five years for illegally prescribing opioids; several traffickers of deadly illicit fentanyl; and an opioid dealer who was sentenced to seven years in prison after being arrested with more than 300 illegally purchased opioid pills and $570,000 in cash. She also played a key role in a parallel civil and criminal fraud investigation into one of the largest mental health service providers in the world, which resulted in a $17 million civil settlement.

After leaving the United States Attorney’s Office, Bunn returned to Steptoe & Johnson, where she has worked closely with the business community, representing clients ranging from large corporations to family businesses and law enforcement agencies.

Bunn brings a wealth of courtroom experience to the table. Both as a prosecutor and in private practice, she has tried numerous jury verdict cases and served numerous appeals in federal and state courts. She has successfully argued in the United States Court of Appeals for the Fourth Circuit, the federal appeals court for West Virginia, Virginia, Maryland and the Carolinas.

Bunn comes from a multi-generational family of West Virginia coal miners: two of her great-grandfathers, both of her grandfathers, her father, and many other family members were underground coal miners, and her husband’s family operated coal mines in West Virginia for decades. She and her husband live in Charleston with their two children. They attend Bible Center Church and Bunn is on the board of directors of Bible Center School. Bunn is active in her profession and community, is a member of the Defense Trial Counsel of West Virginia, and has volunteered with the Boy Scouts of America’s Legal Explorers Program.

“Haley will be a strong Conservative voice in court,” Gov. justice. “She understands the importance of faith, traditional values ​​and law and order. These things are the backbone of West Virginia. And she knows that in order for our economy to continue growing, employers and employers must have confidence that they will do justice fairly in our courts. She will administer the law fairly and impartially and be a Supreme Court Justice that all West Virginians will be proud of.”

Bunn is taking over the seat vacated by former Judge Evan Jenkins, who resigned to return to private law practice in February.

[COLUMN] How Bankruptcy Debt Relief Can Eliminate Your Financial Stress