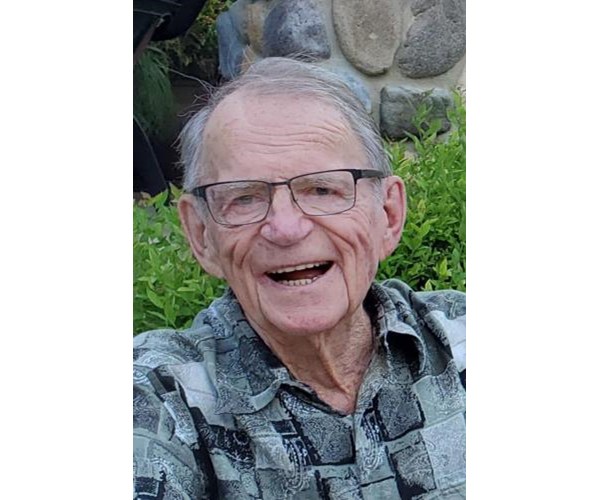 STOUGHTON – Gordon E. “Joe” May, 93 years old, of Stoughton, died on December 30, 2021, peacefully surrounded by his family. He was a longtime resident of Stoughton and also lived in Madison for 30 years. Gordon was born on July 25, 1928 in Minden, Neb., To Grace (Atchison) and Paul May Sr. He attended Stoughton Public Schools and graduated in 1946.

Gordon spent two years in the U.S. Army, where he trained at the Army Intelligence School at Fort Riley, Can., And served in intelligence operations with the 88th Infantry Division in Italy. After his release, the GI Bill allowed him to attend the University of Wisconsin-Madison in three years, where he earned a bachelor’s degree in sociology. He had the privilege of working with fellow veterans on the Badger Honor Flight to Washington, DC in September 2013.

Survivors include his five children, Mary Jo (Dan) Davis, Marcia Tarrant, Margie May from Stoughton, Margy May and Michael May from Oregon; and his stepchildren Michael Hotchkiss and Renee (Hotchkiss) Johnson and their families. He is also survived by four grandchildren, Betsy (Matt) Towns, Mari Davis, and Justin and Eddie Blumenthal; and great-grandchildren, Malcolm and Noah Towns and Lydia Davis. In addition to his parents, Gordon preceded his first wife and mother of his children Betty (Holtan) May in death; his second wife Ardell (Hotchkiss) May; Brother Paul May Jr .; Daughter-in-law Lisa May; special niece, Jean Reid; and other family members.

Gordon worked for the Wisconsin State Department of Administration, where he managed state real estate for 30 years before retiring in 1987 at the age of 59. He was an avid athlete who worked with his father, brother Paul, and son Mike. liked to hunt and fish. He also raised Brittany Spaniels and conducted field trials across the Midwest. Gordon loved playing golf with his “Cronies,” as he called them, at Stoughton Country Club. In the 1980s he and his wife Betty opened the Quill & Brush Art Gallery in Stoughton. Gordon loved music and enjoyed the big band era. He has been fortunate enough to see many big names perform – Louie Armstrong, Benny Goodman, and Glen Miller, to name a few. He loved the Chicago Cubs, the Green Bay Packers, and the Wisconsin Badgers. Gordon took great pride in being a candidate for the Wheel of Fortune, where he was the grand prize winner of a new car and merchandise. He loved Florida’s Emerald Coast and wintered in Destin, Florida for 30 years.

Gordon was a member of the Stoughton Country Club, Bethel Lutheran Church, and the American Legion Post 59 of Stoughton, and served on the Stoughton School Board in the 1970s.

Gordon believed that family was the most important aspect of his life. His family was his world and he loved spending time with his children and their families.

The family would like to thank Gordon’s Caregivers and the Agrace Hospice for the excellent home care and are grateful for the dedication, kindness and friendship shown to Gordon and his family.

A memorial service will be held on Saturday, January 22nd at 11am at Madison’s BETHEL LUTHERAN CHURCH. The family receives friends in church an hour before the service. Instead of flowers, gifts of money can be sent to the Wisconsin Chapter of the American Parkinson’s Organization: www.apdaparkinson.org/community/wisconsin. Grasse Funeral Service in Rio supports the family.

The Church of St. Lawrence in Philadelphia could be replaced by an eight-story apartment building