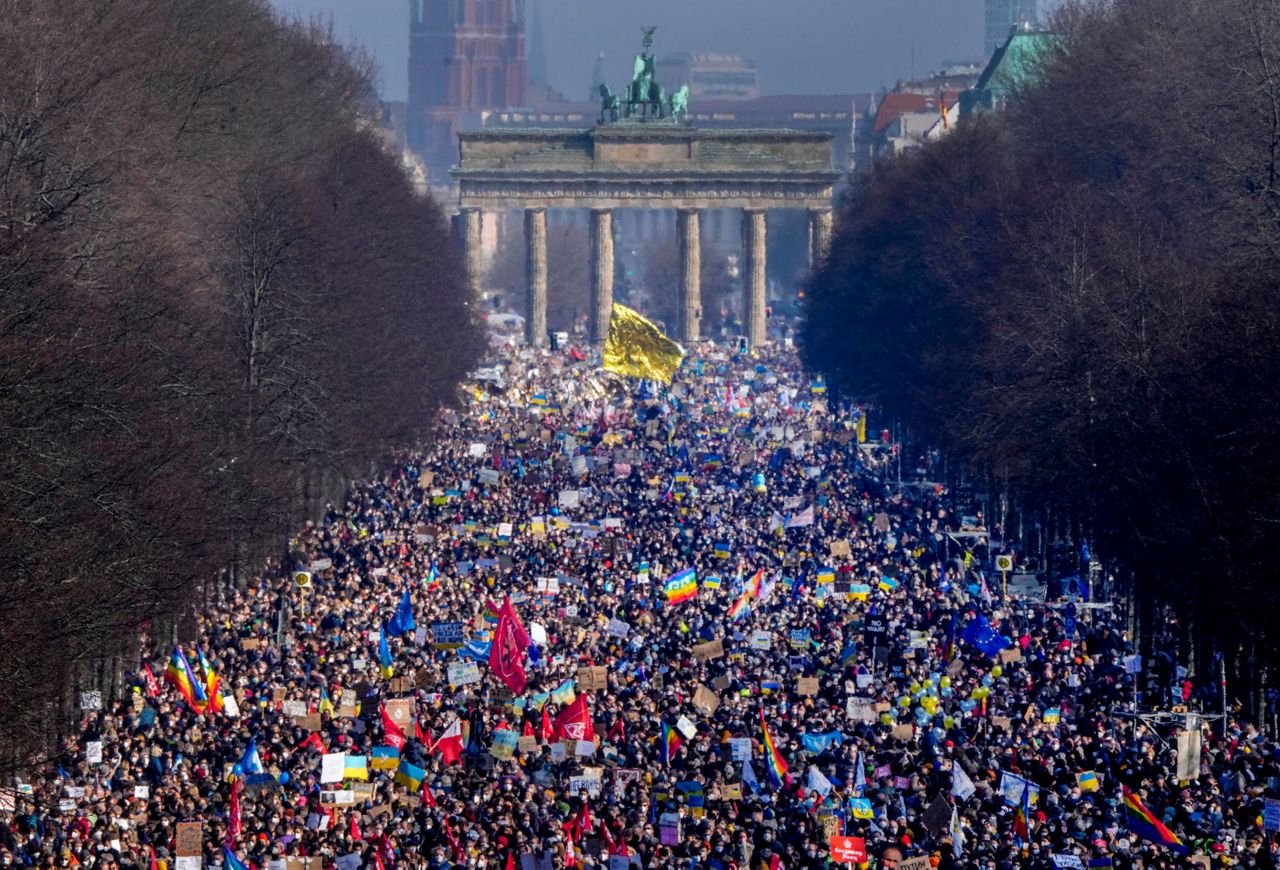 BRUSSELS (AP) – Germany announced on Sunday it will allocate 100 billion euros ($113 billion) to a special fund for armed forces and will keep its defense spending above 2% of GDP from now on. It was one of the most significant shifts in European security policy in decades, triggered by Russia’s invasion of Ukraine.

Chancellor Olaf Scholz’s announcement, which came hours after Germany’s announcement that it would send arms and other supplies directly to Ukraine, underscored how Russia’s war in Ukraine was rewriting Europe’s security policy after World War II.

It came as Israel offered itself as a potential mediator to help broker an end to the fighting, as it has good relations with both Russia and Ukraine, and as protesters took to the streets in European capitals to demand an end to the fighting largest war to call for ground offensive on the continent since World War II.

Of the tens of thousands who gathered outside Berlin’s Brandenburg Gate to protest the invasion, some carried placards with slogans such as “Hands off Ukraine,” “Tanks to the windmills,” and “Putin, go to therapy and leave.” Ukraine and the world at peace.”

Scholz’s announcement of new funds for defense is significant for Germany, which has been criticized by the United States and other NATO allies for not investing adequately in its defense budget. NATO member states have committed to spending 2% of their GDP on defense, but Germany has consistently spent much less.

“It is clear that we have to invest significantly more in the security of our country in order to protect our freedom and our democracy,” said Scholz at a special session of the Bundestag in Berlin.

Scholz said the €100 billion fund is currently a one-off measure for 2022. It’s not immediately clear whether similar funds will be made available in the coming years. However, Scholz hinted that Germany will exceed the 2% of GDP threshold in the future, pointing to a future increase in defense spending overall.

German policy changed when Italy, Austria and Belgium joined other European countries in closing their airspace to Russian planes and Israel announced it would send 100 tons of humanitarian aid – medical equipment and medicines, tents, sleeping bags and blankets – to help civilians to help involved in the fighting in Ukraine.

Israel also offered itself as a potential mediator during a phone call between Israeli Prime Minister Naftali Bennett and Russian President Vladimir Putin, the Kremlin and Israel said. A senior Israeli official, who spoke on condition of anonymity because of the confidential diplomatic matter, said Bennett told Putin Israel was ready to help as much as needed, at any time, to resolve the crisis and bring the parties closer together.

On the European front, European Union interior and foreign ministers held emergency talks on Sunday to respond to the crisis.

Interior ministers debated how to deal with an influx of refugees from Ukraine, as well as how to manage security challenges at the EU borders with Ukraine and humanitarian aid to the country. The UN refugee agency said more than 365,000 people had fled the country as of Sunday and estimated 4 million could flee as fighting spreads.

To strengthen its military training and support missions around the world, the 27-nation bloc has established a European Peace Facility; a fund capped at around 5.7 billion euros ($6.4 billion). Part of the money can be used to train and equip partner countries, including with deadly weapons.

The meeting comes a day after Germany announced a fundamental change in policy to send arms and other aid directly to Ukraine. These include 500 “Stinger” missiles used to shoot down helicopters and fighter jets, and 1,000 anti-tank weapons.

The delivery of arms bought with EU funds to Ukraine would be unprecedented.

Borrell says EU ministers will also consider “further measures to support Ukraine against Russian aggression.” The meeting is informal, so no binding decisions on support or new sanctions can be made, but their recommendations could be implemented in the coming days.

The meeting came after the United States and European nations on Saturday agreed to impose the most potentially crippling financial sanctions on Russia, targeting central bank reserves that prop up Russia’s economy and some Russian banks from the global financial network Disconnect SWIFT.

Catholic and Orthodox religious leaders, meanwhile, prayed for peace on Sunday, expressed their solidarity with Ukrainians and condemned the Russian invasion.

“Those who make war forget humanity,” Pope Francis said during his Sunday lunchtime blessing in St. Peter’s Square, while a cluster of Ukrainian blue-and-yellow flags fluttered below. He said such a mentality “is based on the diabolical and perverse logic of guns, which is the furthest thing from God’s will”.

Francis refrained from naming Russia, in apparent deference to his hopes of keeping dialogue with the Russian Orthodox Church open.

Earlier Sunday, the Ecumenical Patriarch of Constantinople described the invasion of Russia as “beyond every sense of justice and morality” and called for an end to the war.

Patriarch Bartholomew is considered the spiritual leader and first among equals of Eastern Orthodox Christians worldwide. He granted independence to the Orthodox Church of Ukraine, which separated it in 2019 from the Russian Church, to which it had been attached since 1686. The Russian Orthodox Church then broke off relations with him.

Follow all AP reports on Russia’s invasion of Ukraine at https://apnews.com/hub/russia-ukraine.