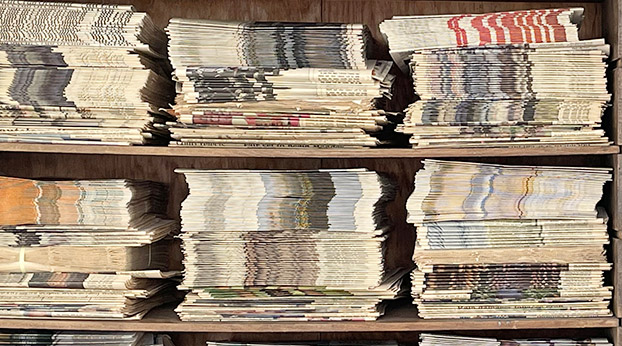 • David N. Zimmerman, a Danville native and former Danville printing shop owner, was honored upon his retirement as Assistant Postmaster at the Lexington Post Office. A friend, Wood Dunlap, said Zimmerman reminded him of a postage stamp, “with a job ’til it’s done.” Zimmerman began his career in March 1907 as an assistant postmaster.

• WC McAfee, Chief of the Clan in Kentucky, announced that the Clan’s fifth annual meeting would be held at the Providence Church. The McAfees of Boyle and Lincoln counties are scattered throughout Kentucky.

• Plans have been made for a trucking service to carry mail between Danville and Louisville since the Southern Railway trains have ceased service. Danville Postmaster LE Rue has been notified of the contingency plan.

• GB Daugherty of Rolling Fork said his neighborhood was drier than the oldest Fork resident remembered. Stock water was scarce, crops were badly damaged and grass was nearly burned. Rolling Fork River is almost dry and there was no water in ponds.

• Three men died as a result of a rainstorm in Boyle and Washington counties west of Perryville. William Pope was killed in a barn near Danville and two other Washington County people west of Perryville were killed by lightning. Telephone lines were damaged, fruit trees were uprooted, and several barns were destroyed.

• The Boyle Fiscal Court approved plans to build the viaduct over the Southern Railway System’s tracks in the West End and submitted them to the State Highway Department for approval. The Danville City Council also approves the works.

• The local six-day campaign raised 1,500 cans of food for victims of flash floods in southeastern Kentucky as part of the American Red Cross effort. Congregations from the local churches also helped with the distribution of food and other necessities.

• A Welcome Service Inc. was organized with Sara Marguerite Jackson as the hostess. She will welcome new residents and also new mothers, brides, babies and special groups. A bonus of free gifts donated by local merchants is given to visitors.

• Danville’s high-flying Yankees stunned baseball fans as they tore a premier diamond 14-6 in Campbellsville. This was Danville’s fifth straight game without a loss. Pistol Pete McCowan had seven hits during the game.

• Jack Durham, former city editor and sportswriter for Kentucky Advocate, has been appointed sports editor of the Abilene Reporter-News in Texas. He also served in the Army Air Forces and was a police reporter for the Salt Lake City Tribune.

• A resolution approving a neighborhood development plan for Danville was passed by the Danville City Commission and presented to the Federal Housing and Urban Development Agency. The plan was to acquire 10 lots on Carr Street and five lots on Green and South Third Streets near the Ephraim McDowell Memorial Hospital. Estimated to cost $275,000, it was to be improved north of Russell Street.

• Shakertown was designated a National Historic Landmark at a ceremony in Pleasant Hill. Home Secretary Rogers CB Norton presented the official certificate to the trustees of the restored Shaker Village.

• Gary D. Huffman and David W. May, both from Danville, were among 1,300 freshmen inducted into the US Air Force Academy class in 1976. May is a 1972 graduate of Boyle County High and Huffman is a graduate of Danville High.

• Garland Bradshaw of Danville, one of the greatest show horse trainers and exhibitors of all time, was honored at the Kentucky State Fair Horse Show in Louisville. He developed many champions including four-time five-gait winner Lady Carrigan.

• Sellers and buyers got an early start with the three-day, 450-mile yard sale along US127. The shoppers were out a day early to inspect the merchandise along the Boyle County freeway.

• The Great American AirFest planned for September in Junction City, between 20,000 and 25,000 people are expected to live in the city. Greyhound buses were to help get people to the Boyle County High School parking lot to take them to the airport for the festival.

• Danville school officials announced that they are preparing for the 1,965 students to arrive in the high school, middle school and elementary schools in the fall classes.

• Danville native Capt. Richard E. Trayner, a Navy veteran, sailed aboard the USS Constitution during the ship’s historic voyage that marked the 200th anniversary of her launch in Boston Harbor.

• Center College has been named “One of the Best Value Colleges in the Nation in College Education” by Money Magazine for the eighth consecutive year on the list.AT