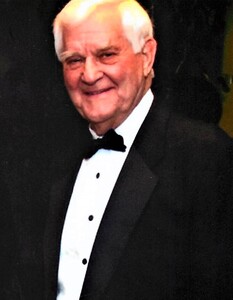 Freling Hand “Fritz” Scarborough, Jr., 95, of Lake Park, GA passed away on Wednesday, August 10, 2022 at The Lantern at Morning Pointe in Ashland, KY.
Mr. Scarborough was born on October 26, 1926 in De Soto, Georgia to the late Freling Hand Scarborough Sr. and Zola Dell Scarborough.
In addition to his parents, Mr Scarborough was preceded in death by a sister, Dixie Dell Sanders.
Mr. Scarborough was the US Department of Agriculture’s Executive Director for the Conservation of Stabilization (USDA ASCS) for the state of Georgia and for Lowndes County. He served as vice president and president of the National Association of County Offices of Employees Organization (NASCOE) for all fifty states. After his retirement he became a real estate agent for the Herndon Company real estate agency. He graduated from the University of Georgia with a bachelor’s degree in agricultural-based marketing. He was a United States Navy veteran who served during World War II. He has been a member of Valdosta Elks Lodge #728, the Turner Center of the Arts Museum in Valdosta, GA, the Lowndes County Historical Society, and a board member of the Valdosta Symphony. Mr Scarborough was a former member of the Valdosta Lions Club and the Valdosta Toast Masters. Fritz loved to sing and did so in the University of Georgia choir. He also sang in his church choir at First United Methodist Church in Valdosta, GA for sixty years, of which he was a member for sixty-eight years. Fritz was an avid sportsman and fisherman, and also a talented marksman. He will be greatly missed by those who knew him.
Fritz is survived by his loving wife, Mildred Veach Enyart Scarborough of Worthington, KY; three sons, Freling Hand (Melinda) Scarborough III of Glenwood, GA, Phillip George Scarborough of Sandersville, GA, and John Perry (Wendy) Scarborough of Lake Park, GA; two daughters, Polly Ann (David) Morris of Lake Park, GA and Janet Marie (Clay) Moseley of Valdosta, GA; seven grandchildren: Brandi Sherrie` (Daniel) Lane, Tanner (Adam Grimes) Morris, Mary Lee Moseley, Richard Moseley, Freling Hand Scarborough IV, Cody Scarborough and Cayla Scarborough; four great-grandchildren: Lila, Hunter, Irys and Broly; a sister, Camille Zola O’Neill of Savannah, GA; two nephews, Michael and Walter; three nieces: Peggy, Camille and Michelle; and a variety of relatives and friends.
A funeral service will be held on Monday, August 15, 2022 at 1:00 p.m. at the De Soto United Methodist Church in De Soto, GA and will be attended by Rev. Charles Adams and Roger McCaleb. Burial will be in the De Soto United Methodist Church Cemetery.
The visit takes place on Monday from 12:00 p.m. until the service in the church.
The family has not requested flowers, and in lieu of flowers, tribute to Fritz can be given to the Community Hospice Care Center in Ashland, KY (2330 Pollard Rd, Ashland, KY 41101) and the First United Methodist Church in Valdosta, GA (220 N Patterson St , Valdosta, GA 31601).
The family has entrusted the arrangements to the Bailey Family Funeral Home in Flatwoods, KY.
Condolences can be expressed at www.baileyfamilyfuneralhome.com.