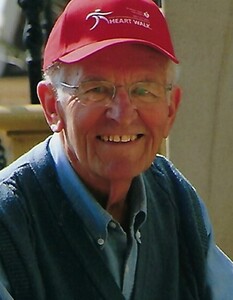 Elmer J. Fundermark of Lancaster, Ohio, formerly Conneaut, Ohio, was called to eternal life on August 21, 2021 at the age of 93. He was born in Bedford, Ohio and raised in Fairport Harbor, Ohio. After graduating from high school, Elmer joined the US Army, where he served as a World War II veteran in Japan and was honorably discharged in 1947.
In 1948 Elmer married Phyllis Erkkila after running off to New York City. Elmer earned a bachelor’s degree in horticulture in 1950 and a master’s degree in education from Ohio State University in 1970. After brief stints in Columbus, Dayton, and Zanesville, Elmer and Phyllis settled in Conneaut, Ohio, where Elmer owned and operated Eaton’s greenhouse from 1954 to 1968. Elmer then entered education and taught until his retirement in 1991. Elmer sold real estate until he and Phyllis moved to Lancaster, Ohio in 1998.
Elmer has always been active in civic organizations and within his church and was instrumental in founding and building the Lutheran Church of the Good Shepherd in Conneaut. After moving to Lancaster, Ohio, Elmer was an active member of David Lutheran Church, Canal Winchester, and most recently a member of St. Peter’s Lutheran Church, Lancaster.
In his later years, Elmer enjoyed painting and his responsibility for landscaping at the Decorative Arts Center in Lancaster.
Elmer leaves behind his 72-year-old wife, Phyllis, and their three daughters, Jane (Roy) Hart of Lancaster, Ohio, Lori (John) Crossmock of Springfield, IL, and Ellen (Thad) Smith of Marietta, GA. Elmer also leaves six grandchildren, Bethany (Matthew) Lambert, Stephen (Jocelyn) Hart, Cheryl (Patrick) Marynowski, Linda (Charles) Riley, Zachary (Deremier) Smith, Alyssa Smith, and nine great-grandchildren. Elmer also leaves behind his brother, Melvin Fundermark, of Mentor, Ohio, as well as several nieces, nephews, and cousins.
Elmer preceded his parents Elmer and Matilda Fundermark, stepmother Helen Fundermark, and sister Rita Shetina in death.
Caring CremationÂ® was carried out by FRANK E. SMITH FUNERAL HOME AND CREMATORY, LANCASTER, OHIO 43130.
A memorial service will be held in the Lutheran Church of St. Peter, which the family likes.
Memorial gifts in Elmer’s name can be sent to Fairhope Hospice, 282 Sells Rd., Lancaster, OH 43130, Good Shepherd Lutheran Church, 876 Grove St., Conneaut, OH, 44030 or St. Peter’s Lutheran Church, 105 E. Mulberry St., Lancaster, OH 43130.
To send an online letter of condolence and add yourself to the guest book, please visit www.funeralhome.com.

Video of the demolition of St. Joesph Church in Karachi causes an outcry – Pakistan