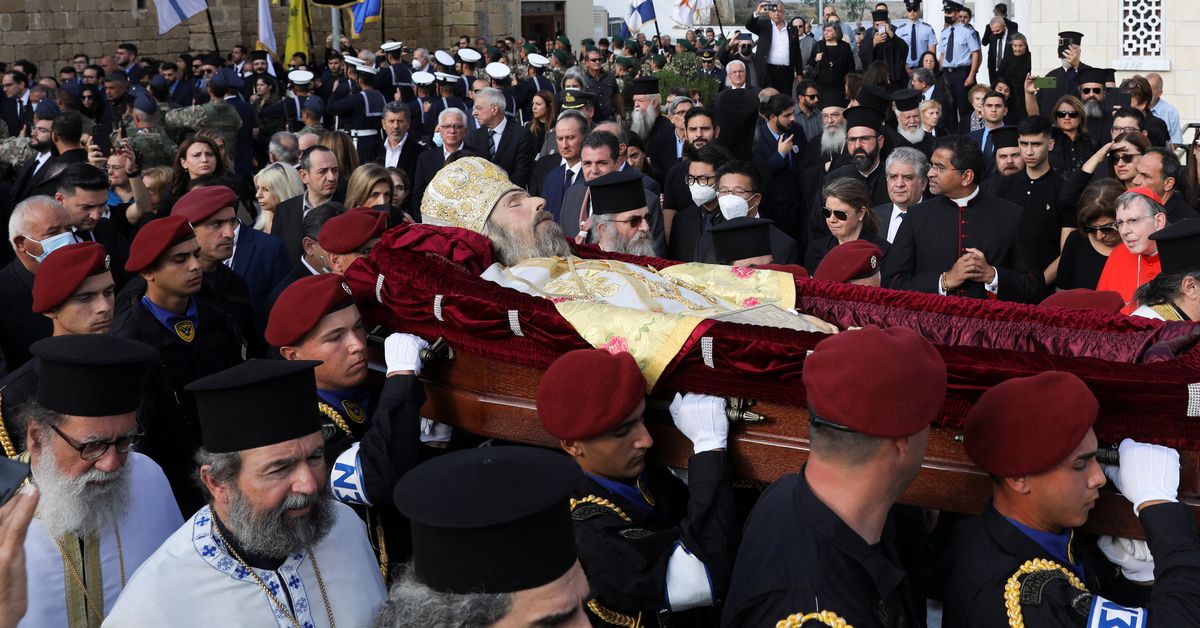 NICOSIA, Nov 12 (Reuters) – Cyprus on Saturday buried Archbishop Chrysostom II, a pioneer who clashed with his peers to keep Russian influence in the Orthodox Church at bay and spearheaded the biggest church reforms in centuries .

Chrysostom died of cancer on November 7 at the age of 81.

Since 2006 he has led the Church of Cyprus, one of the oldest churches in the world, tracing its lineage to one of Christ’s earliest followers.

As the church bells rang, Chrysostom’s open coffin was led in the weak autumn sun to a crypt beneath a Nicosia cathedral. Before the burial, clergymen carefully removed his outer gold robes, covered him with muslin, and doused the shroud with oil in the sign of the cross while they chanted Byzantine hymns.

Four of the world’s 15 Eastern Orthodox self-governing or autocephalous churches have recognized the independence of Ukraine’s Orthodox Church outside of Moscow’s sphere of influence.

The Church of Cyprus recognized it in 2020, with Chrysostom strongly opposing senior clergy in his ecclesiastical governing body, the Holy Synod, which is seen as pro-Moscow.

“He preserved the status of the Church of Cyprus as autocephalous, far from any outside influence or dependency,” Cyprus President Nicos Anastasiades told a mourner that included Ecumenical Patriarch Bartholomew, the spiritual leader of the world’s 300 million Eastern Orthodox Christians .

Bartholomew recognized the autocephaly of the Church of Ukraine in 2019, sparking a split with Moscow. “He was an ardent champion of the views of the Ecumenical Patriarchate in times of turmoil and obstacles,” Bartholomew said.

Chrysostom ran a church with diverse business interests, from brewing beer to real estate. He also admitted using his clout to secure a Cypriot passport for a Malaysian fugitive businessman, Jho Low, although he said he acted in good faith and was unaware the investor was on the run.

When he was elected in 2006, he reinstated the bishoprics and dioceses that had been abolished in the Middle Ages, expanded the synod to its former size, and restored the Church’s full decision-making capacity. Previously, the Cypriot Church had to summon bishops from other churches to deal with important matters.

Elections for a new archbishop are expected later this year.