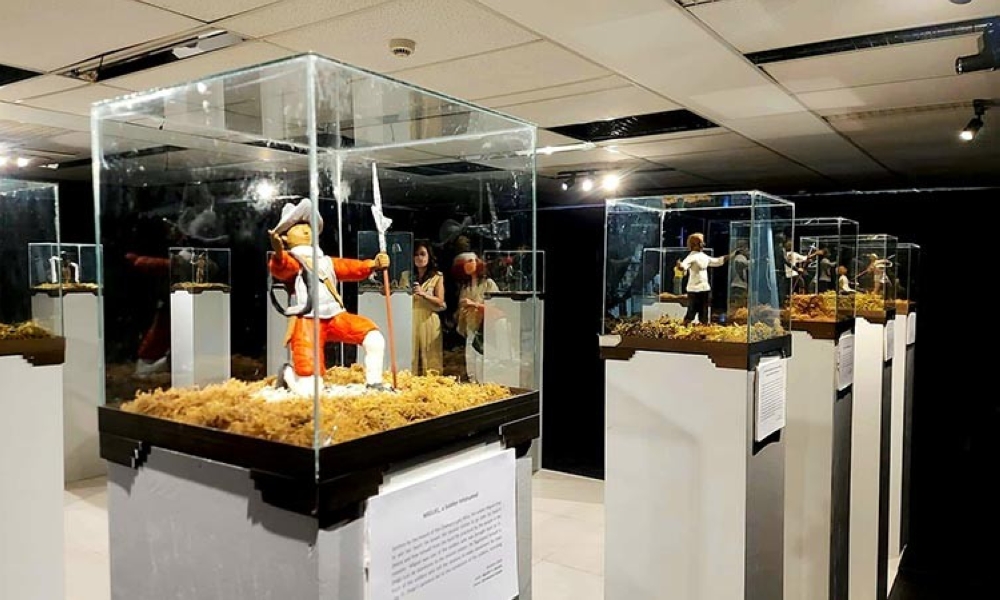 Church official presents an exhibition about the life of St. Pedro Calungsod, told in clay figures

SCULPTURE OF THE LIFE OF A SAINT. A total of 17 clay figurines depicting the life and martyrdom of Saint Pedro Calungsod, the first saint of the Visayas, are currently on display in the gallery of South Road Properties’ San Pedro Calungsod Chapel. The exhibition is part of the activities in honor of the 10th anniversary of Calungsod’s canonization. / HONEY COTEJO

SEVENTEEN clay figurines depicting people involved in the life and martyrdom of St Pedro Calungsod are on display at the Teatro de San Pedro Gallery in the Chapel of San Pedro Calungsod on South Road Properties.

The exhibition is one of the activities in honor of the 10th anniversary of the saint’s canonization.

The clay figures were made by Msgr. Agustin Ancajas of the Archdiocese of Cebu.

Ancajas, who is also the organizer of the event, told reporters during the exhibition’s opening ceremony on Friday, October 21, 2022 that he was inspired to create sculptures that would tell the story of St. Pedro Calungsod differently.

“The story of San Pedro Calungsod is often told in drama and plays. So I explored a different path through sculpture,” said Ancajas.

Ancajas stated that he first started sculpting a figure in July last year.

Entitled Marianas 1672 Revisited: People in the Mission and Martyrdom of San Pedro Calungsod in Clay, Ancajas said his exhibition is also his dedication to the saint, who answered many of his prayers.

Admission is free at this time. It will remain open for a month, Ancajas said.

Archbishop Jose Palma presided over the official opening of the exhibition on Friday.

St. Pedro Calungsod was a Catholic Filipino Visayas migrant, sacristan, and missionary catechist who, along with Spanish Jesuit missionary Diego Luis de San Vitores, suffered religious persecution and martyrdom in Guam in 1672 for their missionary work.

On October 21, 2012, exactly 340 years after his death, Calungsod was ordained by Pope Benedict XVI. canonized.

Calungsod was the second Filipino to be declared a saint by the Roman Catholic Church, after St. Lorenzo Ruiz of Manila.

Quilters put together a tour to support Bridge to Hope