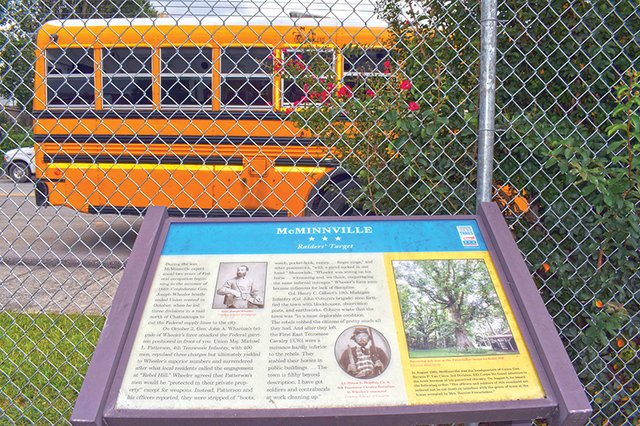 Changes on the way for civil war markers

There are five markers in Warren County: one at Pepper Branch Park, one at Cumberland Caverns, one at Warren County Middle School, and two at the Warren County Courthouse. These markers connect this community to the Tennessee Civil War Trails, a tour of Civil War sites across the state.

“As you all know, we have replaced some signs. They were in really bad shape. You couldn’t read them. This was a temporary fix,” Tourism Development Board Administrator Dayron Deaton Owens told TDB members.

“Let’s talk about middle school,” Owens said. “We know that you have to be moved. It’s behind a gate. You cannot get there when they are closed. I don’t know that we have to send visitors onto the school grounds without permission.”

Dedicated to the “Raiders’ Target” relating to the occupation of McMinnville and the involvement of Rebel Hill, it was placed at WCMS before a security fence was erected.

“If we wanted to keep this marker close to the battlefield, there really isn’t a good area for tourists to stop, park and look at the sign,” said Cody Prince, President of the Heritage Alliance, who was asked to help with the search for a new help location. “Everything is built up. The battlefield is completely taken up by homes, schools and businesses.”

It has been proposed that this plaque be removed and replaced with one dedicated to Cumberland Female College and its use during the Civil War. This new marker could be erected at the intersection of College and Donnell Streets on First Baptist Church property.

“First, it’s within walking distance of downtown McMinnville, and tourists could walk all of downtown and visit these signs,” Prince said. “Second, the building that stood on this site before it was the Southern School of Photography was Cumberland Female College. During the Civil War it was decommissioned and used as the federal headquarters for some time. So in that sense it still refers to the battlefield.”

Founded in 1850, Cumberland Female College opened its first session in 1851. The Civil War forced the school to close but later reopened.

There is currently a plaque dedicated to WS “Dad” Lively, founder of the Southern School of Photography.

“It’s all about tourism here,” Owens said. “We want them to go to certain places. At the same time, we want them to be on the move. The Civil War Trails (board) asked us to look at these because they are out of date. You need us to update them. These changes really didn’t start with us.”

“Occupation of McMinnville: Conflict on the Homefront” and “Lion of Ben Lomond,” dedicated to General Benjamin H. Hill, are both located side by side in front of the courthouse.

“It’s rare that two markers are right next to each other,” Owens said. “Well, that’s a problem in itself. It shouldn’t be like that. We were asked to move them because these markings are not relevant to the courthouse. We tell people a story with the markers. The story has to fit the place.”

It was suggested that “Occupation of McMinnville” be removed and replaced with a marker dedicated to Lucy Virginia French.

“Lucy Virginia French has a really interesting story,” said Owens. “Many of the Civil War Trails do not focus on minorities and women. This was something they really recommend for future trail locations.”

French was the daughter of Mease W. and Elizabeth Parker Smith. She was born in March 1825 and married Col. John Hopkins French. She was a well-known author.

“She was very well known during her time,” Prince said. “Over time, that fell away. People don’t know much about her.”

It has been proposed that the new marker be placed in Riverside Cemetery, where French is buried.

“She has a very elaborate headstone,” Prince said. “We thought we could put the marker on her grave. That would get people going. You could go to Depot Bottom, stop and eat at the old store, and walk around the graveyard. It’s absolutely beautiful in the summer.”

Owens added, “It doesn’t have to be at her grave. I understand it’s something special. It could be on the outside of the graveyard and that would do. We wanted to place this in the Depot Bottom area to create that walkability.”

It was proposed to keep the General Hill marker but move it to his burial ground.

“He is actually buried in the town cemetery on South High Street,” Owens said. “So we thought about moving to this area. Again, it becomes easier to try to get to these places on foot.”

Tourism Development Board members unanimously approve the proposed changes, but the decision is not final. Approval has yet to be obtained from the First Baptist Church, the City of McMinnville, and the Civil War Trail Board of Directors.

TDB must obtain permission from McMinnville officers to place markers in either the City Cemetery on South High Street or the Riverside Cemetery in Depot Bottom, both city lands.

Likewise, First Baptist Church elders must consent to the use of their property.

The Civil War Trails, with more than 1,200 markers in Tennessee, Maryland, North Carolina, Virginia and West Virginia, are patrolled by Civil War Trails, a 501 C-3 non-profit organization. The board must also approve the changes to the Warren County markings.