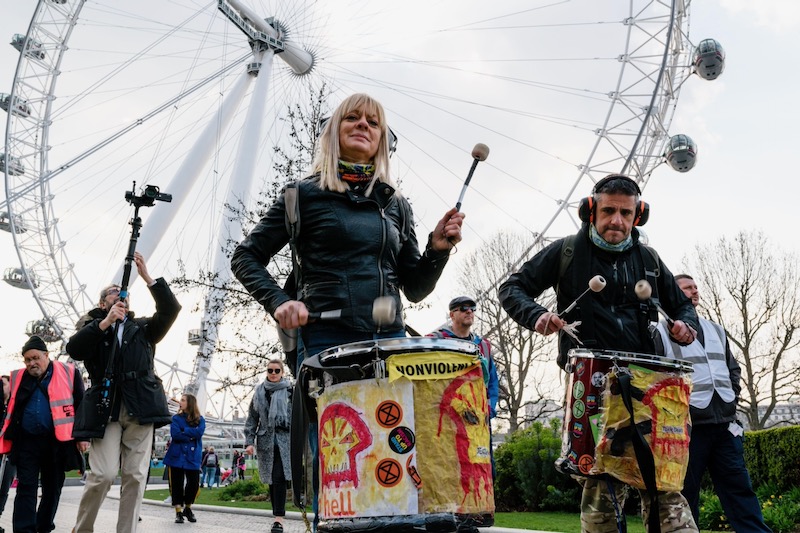 Protesters in London are trying to raise awareness of the climate crisis, particularly around water and indigenous communities.

Nine Catholic bishops and the Jesuit Provincial were among 500 signatories to a letter from church leaders and clergy to the Prime Minister calling for “global leadership on the climate crisis”.

The letter calls on the government to provide “financial and fiscal support for renewable energy and energy efficiency”. She is also calling for support for vulnerable households hit by price hikes “through measures including a windfall tax on oil and gas companies”.

The Catholic Archbishops of Birmingham, Cardiff and Glasgow signed the letter, as did Bishop of Salford John Arnold, the Environment Officer of the Bishops’ Conference of England and Wales.

They are urging the government to use its spring declaration to fund solar and wind power and retrofit homes to improve insulation, rather than support new oil and gas developments.

It also points to the commitment of many churches to decarbonizing their buildings and reaching net-zero by 2030, “including through the installation of solar panels, heat pumps and other energy efficiency measures.” The signatories say the church’s £20 billion in assets under management should play a role in broader investment in the environmental sector.

“Working together with other investors, churches can make a significant contribution to addressing the climate crisis and supporting a fair and rapid transition from fossil fuels to a clean energy economy.”

Commenting on the letter, Christine Allen, Director of Cafod: “The need for a just transition to a low-carbon economy has never been clearer or more urgent. For the world’s poor, access to energy is a matter of survival.”

However, many charities expressed disappointment with the March 23 spring statement, calling it a “missed opportunity”.

“The government continues to squander opportunities to lead the country out of the pandemic and into a fairer and more just future,” the Society of St. Vincent de Paul said.

Christians Against Poverty, the debt advice charity, said the statement offered “very little to help those most vulnerable and to ensure the longer-term financial security of those on the lowest incomes”.

City Council Meeting of the City of Dexter