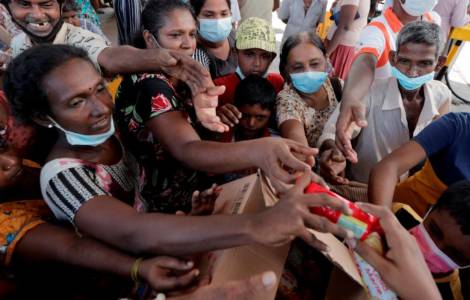 Colombo (Agenzia Fides) – There is an urgent need for international interventions and solidarity initiatives to help the paralyzed nation: this is the appeal of the Christian Conference of Asia (CCA), an ecumenical organization that has sent an ecumenical pastoral delegation to Sri Lanka at the beginning August.
The CCA expresses its deep concern at the severe economic crisis that has caused unprecedented political unrest and social upheaval in the nation. The country is in crisis due to the economic collapse and the deterioration of the situation in the country, mainly due to high inflation, rising commodity prices, increasing hunger and malnutrition, fuel and medicine shortages, the public order crisis, the increase in violence and human rights violations.
The CCA team, led by the organization’s Secretary General, Mathews George Chunakara, met with leaders of various Christian denominations in Sri Lanka, as well as MPs, leaders of opposition political parties, civil society leaders, trade unionists, former ministers, labor representatives, interfaith groups and leaders minority religious communities and representatives of the “Aragalaya” (“struggle”) movement at the forefront of the popular struggle. During the visit, the team attended various meetings, during which they highlighted the seriousness of the ongoing crisis and the “consequent loss of basic services and dignity of the Sri Lankan people”. The delegation stated that “Sri Lanka is currently facing the worst economic and political crisis since 1948, with a profound and tangible impact on the daily lives of its citizens and with serious repercussions on respect for human rights”.
The General Secretary of the CCA said: “The visit of the pastoral group is an expression of the solidarity of the Asian churches with the people and with the churches of Sri Lanka. The team’s message will notably be shared on various international ecumenical platforms during the World Council of Churches (WCC) General Assembly to be held in Karlsruhe, Germany, at the end of August.”
“Sri Lanka, once seen as a nation with a high level of education and living standards, has now become a nation where masses of poor people are struggling to live with dignity and to overcome economic crises and political instability.”
Hence the urgent appeal: “Sri Lanka’s economic meltdown requires the immediate worldwide attention of the international community and the full solidarity of the churches to avoid another human tragedy,” Chunakara said.
Anger and fear are spreading among the population, fueling the “aragalaya”, the Sinhala word for “fight”. The term “Aragalaya” is used to describe the daily gathering of people who gather at Galle Face in the capital, Colombo, and came into use in calling for the government accused of corruption to step down.
The popular movement and daily demonstrations marked 100 days on July 17th. Prime Minister Mahinda Rajapaksa resigned (on May 9) and then forced his brother Gotabaya Rajapaksa to leave the country on July 15. The President was ousted from office by protesters who then occupied the President’s residence. Parliament has elected a new President.
The country’s inflation hit an all-time high at nearly 55%, while food price inflation rose to 81%. The economic and external debt crises – for which the country is insolvent – ​​were exacerbated by ill-considered agricultural policies that included a ban on fertilizer use. The country defaulted on its $51 billion external debt in May 2022 and is struggling to pay for essential imports like fuel, food and medicines due to tight foreign exchange. Soaring food price inflation has plunged people into poverty and malnutrition.
The United Nations estimates that around 5.7 million people, half of them children, are in need of humanitarian assistance. UNICEF points out that almost every second child in Sri Lanka needs some type of support in terms of food, medical care, clean water, education and health services, including mental health. (SD/PA) (Agenzia Fides, 13.8.2022)