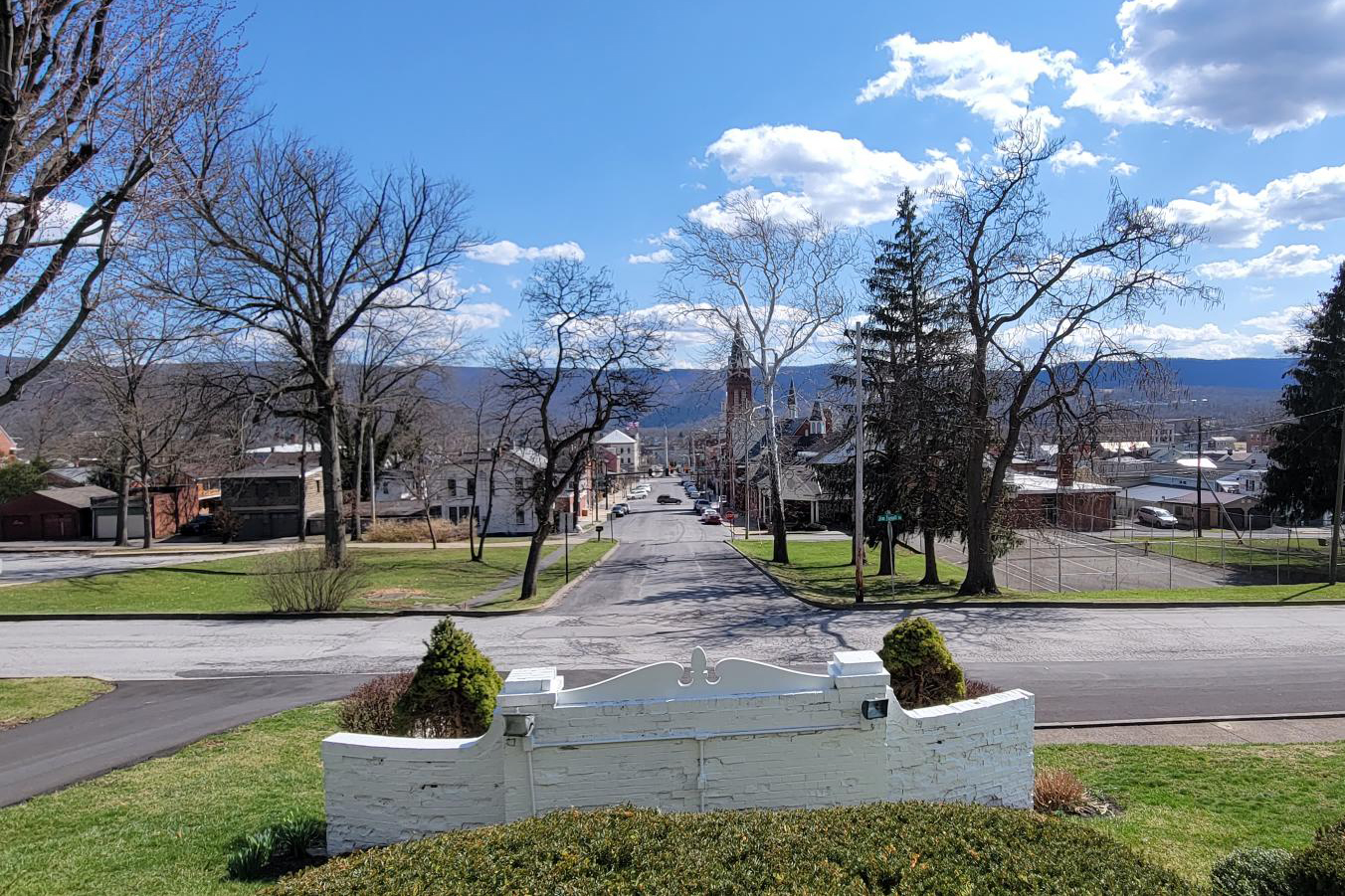 As the US nears 1 million Covid deaths, a hard-hit county struggles with unimaginable losses

She had seen many people in this rural central Pennsylvania hamlet who became infected but recovered within days. She didn’t get vaccinated because she was concerned about how a new vaccine, being developed in record time, might affect her heart condition.

Last October, their youngest son, 45-year-old Eric Delamarter, came down with a cold. He put off going to the doctor because customers were waiting at his shop, where he repaired cars, she said. When he finally went to the emergency room at Geisinger Lewistown Hospital he was diagnosed with pneumonia and Covid.

Within days, Houtz’s eldest son, 50-year-old Toby Delamarter, had also been hospitalized with the virus and shortness of breath.

Less than two weeks later, her two sons were dead. Neither had been vaccinated.

“Even if it doesn’t seem fair and right, later we’ll find a reason why things happen,” said Houtz, 71, as she sat at her kitchen table.

Eric and Toby Delamarter are two of the approximately 300 people who have died from Covid in Mifflin County, where cows grazing in pastures and Amish horses and buggies are often seen. The county 60 miles northwest of Harrisburg is heavily Republican – 77% of the votes cast in 2020 went to Donald Trump – and the former president’s downplaying of Covid-19 found fertile ground there.

Mifflin, with a population of at least 40,000, has one of the highest Covid death rates among US counties — 591 deaths per 100,000 residents as of mid-March, compared with 298 nationally, according to government data from Johns Hopkins University.

The United States is nearing 1 million deaths from Covid – a number few would have believed possible when the pandemic began.

In March 2020, Dr. Anthony Fauci, director of the National Institute of Allergy and Infectious Diseases, that “between 100,000 and 200,000” people could die from Covid at that time, based on modeling of the pace of the spread of the coronavirus in the US.

Reaching one million deaths seemed even less likely when safe and effective vaccines hit the market in December 2020. More than 60% of the 977,000 deaths have since occurred.

Mifflin County offers a snapshot of how a hard-hit community transitioned from skepticism about the scientific reality of the Covid virus and then the vaccine to coping with the unbearable loss and coming to terms with the trauma. About 8 out of 10 deaths nationwide from April through December 2021 were among the unvaccinated, according to the most recent analysis of data from 23 states plus New York City and Seattle by the Centers for Disease Control and Prevention.

Mifflin County Coroner Daniel Lynch is not over the stress of Covid, even as the number of deaths has fallen this year. By mid-March, his office had counted 337 Covid deaths in the county — about 60 more than the state’s official tally. That’s because the coroner counts everyone who dies in the county, including those who lived in other counties. Among the people in the coroner’s count, 311 had not even received a Covid shot. Few residents wore masks, even as cases were high nationally and locally.

“It was pure hell,” Lynch said. “I’ve been a medical examiner since 1996 and have never had calls from nurses reporting crying deaths over the phone, or from facilities reporting two or three deaths at once.”

In Lewistown, the county seat, it’s easy to find people who knew some of the dead.

On a recent afternoon at Corner Lunchbox, all five staff and customers quickly shot up their hands when asked if they knew anyone who had been killed by Covid. Sheila Saurbeck, 65, a manager, said she lost two friends. And she got infected last year and recovered after a few weeks.

Standing behind the counter was owner Lorrie Sirgey, 56. She said she was hospitalized with Covid for four days last spring before being vaccinated. “It was a scary time,” she said.

As elsewhere in the country, Mifflin County has seen a dramatic drop in Covid cases since January. It’s unusual to see someone wearing masks. Health experts point to several factors in Mifflin County’s high mortality rate:

“We live in a very rural area here,” he says. “It’s heavily Republican and heavily in support of Trump, so people were skeptical about Covid in the beginning because he downplayed the disease. And I think that carried over with the vaccine skepticism.”

It’s hard to understand having so many deaths in the county of about 45,000, he added. His 94-year-old mother, who lived in a care home, died shortly after her own bout with Covid last year.

Kodish, the only Democrat on the three-member county commission, said Covid has divided the community, between people who took the disease seriously and got vaccinated, practiced physical distancing and wore masks, and others who just wanted to go about their normal lives .

Though Covid has been devastating for many families, Republican Mayor of Lewistown Deborah Bargo acknowledged the death toll but focused on how her city’s economy is improving.

“It’s been hard for those who have lost loved ones and that pain never goes away,” said Bargo, who has been mayor for 15 years. “But we have recovered economically.”

Bargo pointed out that almost all the shopfronts in the downtown square are occupied, a centuries-old theater is being restored and a young Mennonite entrepreneur has recently opened a café-bakery.

She said she was concerned many older people who have stayed in their homes for fear of Covid have been forever changed by isolation. At her church, she said, people wearing masks still sit apart from everyone else.

Noah Wise, 59, a road warden in Burnham, north of Lewistown, said he wasn’t doing well. His wife Lisa, a nurse at Geisinger’s outpatient clinic, died of Covid in December. She was 58 and unvaccinated because she was worried about how the vaccine would affect a chronic health condition – although health experts say those with chronic health conditions are more likely to suffer severe consequences and death from Covid.

Wise said Lisa likely caught the virus from him after he contracted it in October. “She has no regrets about not being vaccinated,” Wise said. “She thought she was going to pull through.”

His wife’s death hasn’t convinced him to get vaccinated, believing his previous infection gave him immunity. Natural immunity, while conferring some resistance to contracting the disease, varies widely in strength, which is why health experts are urging those who have been infected to get vaccinated.

Jenny Barron Landis, executive director of the Juniata River Valley Visitors Bureau, which covers Mifflin County, said many community members aren’t interested in taking orders from government scientists. “We have many independent farmers and business owners who have not agreed to or complied with the mandates and that has played a big part in the number of deaths and the number of cases here,” she said.

Against this backdrop, Geoff Burke, a local undertaker, recalled weeks in which his Lewistown undertaker handled up to 17 deaths, many of them from Covid – triple the average. “We were overwhelmed,” he said. “Covid just wreaked havoc on our town as it went from nursing home to nursing home.”

As of March 15, Geisinger Lewistown, a 133-bed hospital, had just two Covid patients, down from 50 earlier this winter, Dr. Michael Hegstrom, chief medical officer for the Geisinger Region, which includes Mifflin County. Geisinger refused to disclose what percentage of his staff at Lewistown Hospital were vaccinated against Covid. It would only say that all of its employees are either vaccinated or have received an exemption. Geisinger also refused to disclose how many of his Lewistown employees have died from Covid.

Nevertheless, the hospital is still affected by the virus. It’s running congested due to the high number of patients with medical conditions like heart disease and cancer who have deferred care during the pandemic, Hegstrom said.

Connie Houtz said the deaths of Eric and Toby – two of their three children – were difficult but she was grateful for family and friends and a strong faith. She remembers Toby – who had a couple of health issues including colon cancer a few years ago – as “easygoing and a big teddy bear”. Eric, who had high blood pressure, loved spending time with his daughter and taking the teen fishing, Houtz said.

Both brothers rode Harley-Davidson motorcycles and hung out with friends at a bar near their home. “Sometimes it still hits you that they’re really gone,” she said.