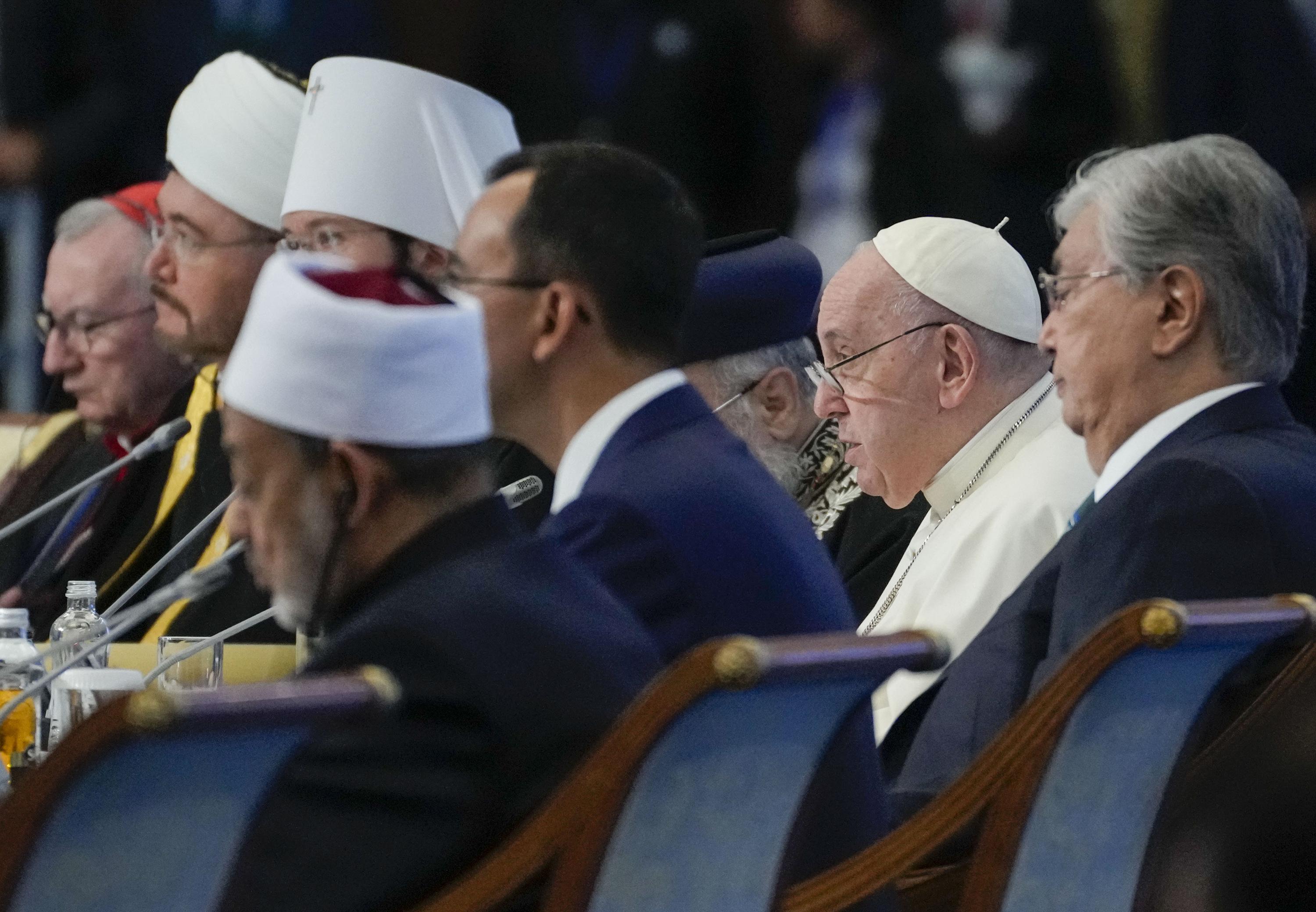 NUR-SULTAN, Kazakhstan (AP) – Pope Francis told the Russian Orthodox hierarchy and other faith leaders on Tuesday that religion should never be used to justify the “evil” of war and that God should never be “held hostage to human lust for power may be held.”

Against the background of the Russian invasion of Ukraine Pope Francis opened an interfaith conference in the former Soviet republic of Kazakhstan by urging delegations to join together in condemning the war. He quoted a Kazakh poet to warn: “Whoever allows evil and does not oppose it cannot be considered a true believer. At best, he is a half-hearted believer.”

In the audience of 80 imams, patriarchs, rabbis and muftis was Metropolitan Anthony, in charge of foreign relations for the Russian Orthodox Church, which has strongly supported the Russian invasion. His boss, Patriarch Kirill, should have attended the convention but canceled last month.

Kirill has justified the Russian invasion on spiritual and ideological grounds, calling it a “metaphysical” struggle with the West. He blessed Russian soldiers going to war and invoked the idea that Russians and Ukrainians are one people.

Francis made no mention of Russia or Ukraine in his remarks, which along with those of Kazakh President Kassym-Jomart Tokayev, opened the gathering of Muslim, Christian, Jewish, Buddhist, Taoist and other faith groups aimed at promoting interfaith dialogue and brotherhood as one Power to promote world peace.

But speaking of Russia’s southern neighbor during the seven-month war, Francis told faith leaders that they themselves must take the lead in promoting a culture of peace, saying it was hypocritical to expect non-believers to promote peace when they are not religious leaders.

“If the Creator to whom we have dedicated our lives is the author of human life, how can we, who call ourselves believers, consent to the destruction of that life?” he asked. “Considering the wrongs and mistakes of the past, let us join our efforts to ensure that the Almighty will never again be held hostage to human hunger for power.”

Francis then urged everyone in the room to commit to settling disputes through dialogue and negotiation, not with arms.

Religious leaders included Sheikh Ahmed al-Tayeb, the Grand Imam of Al-Azhar, the seat of Sunni learning in Cairo, who warmly greeted Francis with a kiss on the cheek as the pope arrived in a wheelchair.

Francis and al-Tayeb signed a joint Christian-Muslim document promoting human brotherhood as a force for peace in 2019 — a document Tokayev cited in his own speech opening the congress.

There has been speculation that Francis may be meeting with Kirill on the sidelines of Congress after both confirmed their attendance earlier this year. The two first met in Cuba in 2016 — the first-ever meeting of a pope and a Russian patriarch — and spoke via video conference during the first weeks of the war.

Francis then publicly criticized Kirill’s justification for invading Ukraine and warned that he should not become “Putin’s altar boy”.

The Associated Press’s religion coverage is supported by AP’s collaboration with The Conversation US, funded by Lilly Endowment Inc. AP is solely responsible for this content.