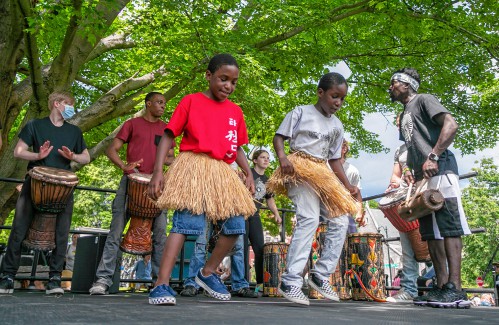 AMHERST — An interactive walk featuring historic sites of Amherst’s first Black and Indigenous families is one element of a June 16 celebration that also marks the launch on Saturday of a new charitable foundation aimed at building a more just future.

The Saturday June 16th events, which are separate from a June 16th anniversary celebration beginning Sunday noon on the Town Common, are being hosted in part by Ancestral Bridges, which is run by Anika Lopes, an Amherst councilwoman and hatter who serves as acts, the president of the foundation was brought into being. The foundation aims to improve economic and cultural opportunities for Black, Indigenous and People of Color (BIPOC) in the region.

According to Lopes, the foundation, which takes its name from her maternal ancestors and late grandfather Dudley Bridges, is about empowering members of the BIPOC community who are systematically denied wealth-building opportunities such as home and land ownership, college scholarships and financial investments became.

“As a direct result of the lack of generational wealth, BIPOC youth today are often disadvantaged in school, entering college, starting businesses and owning property,” Lopes said. “We will continue to develop the future potential of BIPOC in the Amherst area.”

Saturday’s events begin at 11 a.m. at West Cemetery, located between Triangle Street and North Pleasant Street at the north end of downtown, where the foundation will be announced. There, attendees will honor the lives and contributions of the all-black 54th Massachusetts Volunteer Infantry Regiment and the famous 5th Cavalry, some of whom are buried there. These were among the soldiers who alerted Texas residents that the Civil War and slavery were over, and is the historical event that serves as the origin of June 16th.

Then it’s off to the Emily Dickinson Museum on Main Street at 12pm and the Amherst History Museum on Amity Street at 1pm to see a collection of indigenous tools and arrowheads.

The centerpiece of the day is the Juneteenth Heritage Walking Tour in partnership with the Amherst Historical Society and Museum and local organizations and descendants of black families. The tour will showcase black neighborhood sights over a 1.5-mile (2.4 km) journey, giving people a chance to immerse themselves in the everyday experiences of Black Amherst residents from 200 years ago to the present day.

“With this walking tour, we draw back the curtain on how my family and other Black and Indigenous Amherst historical residents lived and worked, what they hoped for and what they fought for, so that Black youth and others can understand this part of our history and use them to grow,” Lopes said.

Neighborhoods featured on the tour include the Westside District, which includes homes at Hazel Avenue, Baker Street, Snell Street and Northampton Road, which was designated a National Historic District in 2000 as a result of Bridges’ efforts, and the neighborhoods of McClellan, Beston and Paige Streets. Hope Church and Goodwin Church will also be part of the tour.

The walking tour will also feature a special art installation by local artist Shirley Jackson Whitaker, highlighting the Tote2Vote campaign, which was recently launched to raise awareness of voter suppression.

The day concludes with a 5pm concert at the Drake Venue on North Pleasant Street.

Those with limited mobility should meet at the high school parking lot at 10:30 am.

For the foundation, in addition to cultural events and exhibitions like the one on June 16, Lopes also sees internship opportunities, education to build wealth and initial home ownership initiatives.

Lopes works with Cinda Jones, President of WD Cowls, whose family was part of the Hatfield and Amherst Colonial settlers, and becomes Vice President of the Foundation.

“We are working together to ensure that Indigenous culture is reclaimed, family stories are told, and economic and homeownership opportunities are created for the BIPOC area,” Jones said in a statement.

Scott Merzbach can be reached at [email protected]