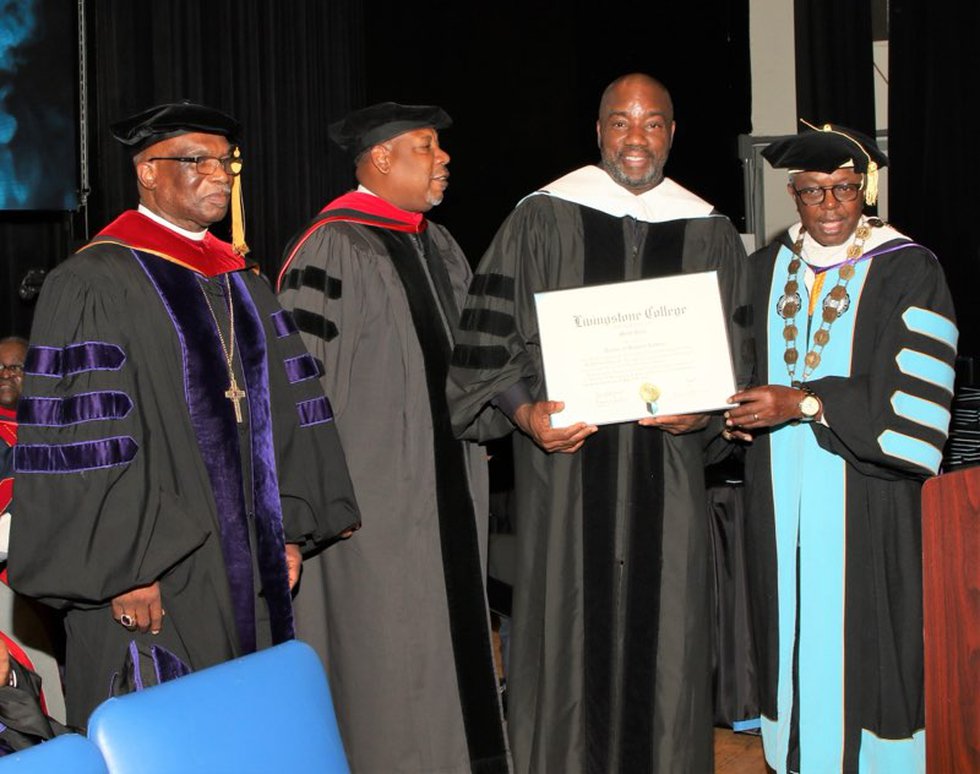 Malik received an honorary Doctorate in Humane Letters from historic black college in Salisbury after an emotional, tearful program.

Graduating Senior and SGA President Justin Wade, who was also a Co-Valedictorian, set the stage with a heartfelt, commendable sermon. Preacher-style, Wade thanked “the haters” on behalf of the graduates, who will cause you to look at yourself in the mirror and affirm, “I’m so smart, I’m so good, I’m so gifted… thank you thank you for every screenshot, thanks for every lie, thanks for every rumour.”

Wade also thanked his help, these brothers and sisters, for not allowing him to be stuck in a negative place; his home, naming his mother, father, relatives, and ascended ancestors; and his heavenly father.

He then asked the graduates who wore sunglasses to take them off. One graduate, Nequareus Roberts-Simon, nicknamed “Q”, was reluctant to remove them. He asked the audience to pray for “Q” and then sang to him, “Q, I came here for you, even though you didn’t want me to.”

“It’s the trauma we carry with us. He wants to take those glasses off, but at that moment he feels vulnerable,” Malik said. After a few minutes, “Q” removed the shading. Later in the show, Malik called “Q” to speak to him and asked about his major. He answered the criminal justice system.

Malik then called one of his friends, Scott Esdaile, who was in the audience, to meet “Q.” Esdaile introduced himself as the head of the NAACP’s national criminal justice system, and the crowd erupted in cheers. “Look to God,” Malik said in reference to making connections.

Malik today focuses on his company called Yoba Development, which aims to break down barriers for people of color in the real estate industry. He intends to work with Livingstone College, which owns hundreds of acres of land.

“I am very interested in working with Livingstone College because there is no HBCU that offers a real estate development degree program and I think it should start here and partner with Yoba Development,” he said. “Yoba Development builds people, places, and things—in that order.”

The aspiring real estate developer has projects in NYC and Baltimore and is in post-production for his educational documentaries The Real Estate Mixtape, Volume 1: Build NY. The series follows Malik and a group of teenagers on his first NYC commercial real estate deal, currently taking place in the South Bronx, which includes the construction of a new school, sports and wellness center and affordable housing.

“God doesn’t create a country anymore, so we have to be the masters of our country,” he said. “Livingstone College has justice and agency in its fate. It doesn’t matter that there are fewer than a thousand[students],” he said. To hear Malik Yoba’s entire speech on the official WLJZ 107.1 YouTube page, click the link: Malik Yoba’s Livingstone College Graduation Speech

A Hollywood veteran with more than three decades of dedication to the arts, Malik has amassed over 50 film credits and more than a dozen starring roles on network/cable television series. His debut in the Disney classic Cool Runnings and his performances as New York police detective JC Williams in the seminal police drama New York Undercover catapulted Malik into American culture.

Jenkins, who announced his retirement earlier this year, said his last run as president was one of his most memorable. Like the seniors, it’s bittersweet as he enters a new phase of life as a retiree.

In honor of Jenkins’ ministry, Bishop Lartey, member of the Board of Trustees of Livingstone College and Presiding Prelate of the Central South Africa Episcopal District of the AME Zion Church, made a special video presentation on the program. He announced that upon the completion of the Central Southern Africa Episcopal District’s Unity Headquarters in Lauana, Angola (South Africa), Dr. Jimmy R. Jenkins, Sr. The center will be based in Angola and Malawi, South Africa.

“The decision to name these centers Dr. Founding Jimmy R. Jenkins, Sr. is directly related to the significant influence of Dr. Jenkins’ brand of educational philosophy and theory, which views education as a discipline that should be holistic in nature,” Lartey said.

Other honorary degrees were given to Elder Joyce Smith of the Oregon-Washington Cascade District of the African Methodist Episcopal Zion (AME Zion) Church; and dr Takis Etim Caiafas of the East West Africa Episcopal District of the AME Zion Church